P.D. Magnus' ruminations on gaming, along with shrill promotion of his own designs.

Patron Badge for 2009 through 2022
As some commenters on the previous posts surmised, I've been playing with Midjourney. Having used up my free trial, I used this exploration as an excuse to get a basic subscription. That was a little over a month ago, and I've now used up my first month's allotment of processor time.

Other commenters offer the opinion that my original Decktet is better than a deck made using Midjourney would be: The original embodies my personal point of view, and these do not.

Let's not pretend, though, that I am not at least a contributor to these experimental things. Output from Midjourney is shaped by prompts, selection, and guided iteration. And none of these would-be cards are direct outputs from Midjourney in any case. All of them involve modifications and redesign in Photoshop, and the card outside the image is all my handiwork.

If there were eventually a whole deck in this style, what should I call it? The current working title is Electric Decktet, but I don't really need a title until I decide whether this is really something I'm doing. 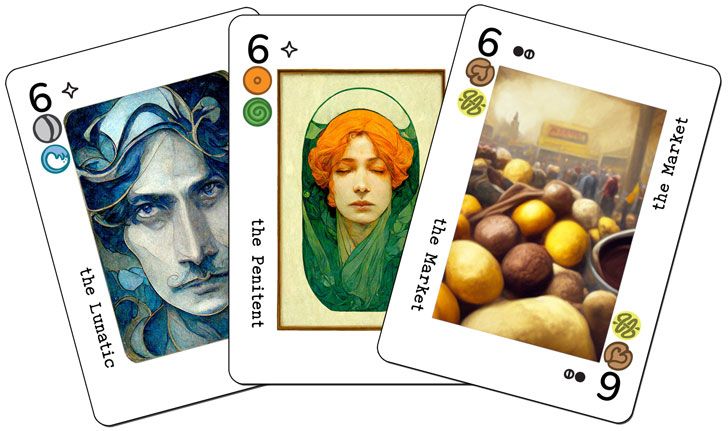 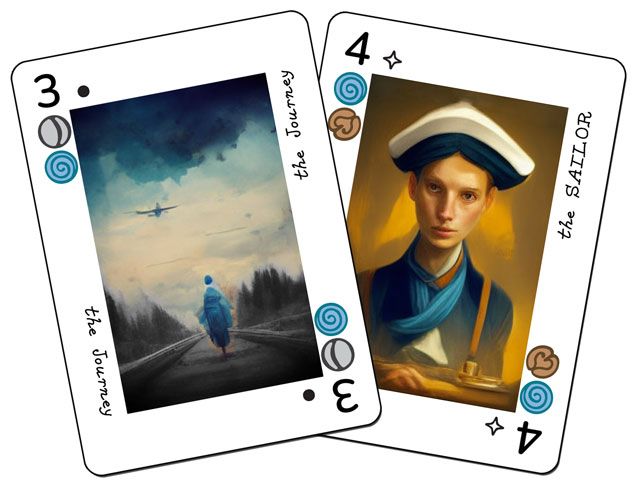 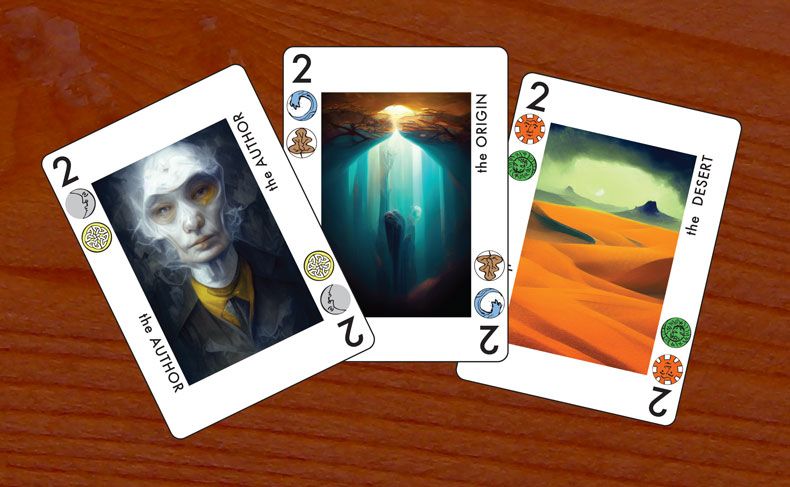 Patron Badge for 2009 through 2022
(This post mentions and links to some of my custom content. Eric, I agree to the terms for creating Spirit Island game elements set forth in the FAQ.)

I've been making custom spirit island content for about four years now. I've made six spirits and three adversaries. I got my hands on a copy of Horizons last week, and I've tried out all the new spirits. It's got me thinking about the way that expansions and new official content can render fan-made content obsolete.

For example, lots of fans have tried their hand at making a desert spirit. Rising Heat of Stone and Sand, one of the new spirits in Horizons, fills that niche at least as well as the fan-made attempts I've seen. Its special rule elegantly captures the danger of the desert. Its Growth options cleverly give it a preference for Mountains and Sands without requiring another special rule. And its lore includes the fabulous line: "Even after centuries, the Spirit remains a bit unclear on why living things get so unhappy about fatal desiccation, but the Dahan make such pleasant patterns across its sands that it's happy to forbear."

How have my spirits fared? And how are they likely to fare with the addition of another twelve eight official spirits in the upcoming Nature Incarnate expansion?

Let's look at the two low complexity spirits I've made.

Simplicity Deals With Things Directly
LORE: When a spirit's sacred sites are disrupted and its presence mostly destroyed, it can no longer be what it was. Bereft of its domain and its aspect, it forgets the distinctiveness that made it subtle and complex.
Simplicity thinks that it is from a possible future when the Dahan have sovereign rights over the island. It dreams of aluminum cabinet fronts with soft-close hinges and programmed skylights which open just before dawn, but somehow it is here in a time of fire and war.
It observes the other spirits and notices that they move things, destroy things, and defend. So that's what it is going to do.

GAMEPLAY: Although it began as a joke, Simplicity settled on being the kind of spirit I wanted to play when I first started. The spirits from the base set were a bit frustrating because they were pretty much locked into a specific playstyle. I understood the rules, didn't understand the strategy yet, and wanted the opportunity to noodle around on my own. Simplicity is a sandbox and a generalist.

OBSOLESCENCE: The published spirit closest to Simplicity thematically is Starlight Seeks Its Form (which was released later in Jagged Earth). But Starlight starts with almost no specific direction, forcing the player to build all the infrastructure to play the game. The result is super-high complexity. By contrast, Simplicity starts with the ability to effect the island directly: to move things, destroy things, defend things.
Although I think that makes Simplicity safe from complete obsolescence, the new low-complexity spirits in Horizons are importantly different than the ones in the base set. They all have a smattering of difference abilities and more diverse playstyles. For example: Whereas the only low-complexity spirit with defend powers in the base set was Earth (the Defend specialist), four out of the five new low-complexity spirits have defend powers (including Teeth, whose jam is devouring and destroying).

Fade to Dust and Whispers
LORE: A spirit of endings: of lives, of families, of trees, of rocks, and perhaps ultimately of the Island itself. It nests in a thriving settlement and, slowly, frustrations begin. Food spoils in storage. Hunting paths fade. A roof collapses. Tools rust and break. The happy mood of the villagers grows dark, and they look to every small change as an omen of disaster. Some leave. Some die in their sleep. Eventually, all that is left is a ghost town.

GAMEPLAY: Dust generates fear. It can stop invaders from participating in Ravage and prune them a bit (destroying explorers, and downgrading towns and cities) but that's all just about stalling as fear accumulates.

OBSOLESCENCE: Dust is intended to be a low-complexity fear spirit, occupying a niche poorly filled by Shadows Flicker Like Flame in the base set. There isn't a fear spirit in Horizons, and none of the spirits in Nature Incarnate are going to be low complexity. So Dust seems safe.
The only warning sign is that "Downgrade" has been introduced as a keyword in the Horizons rulebook, for effects like "Replace a Town with an Explorer." Maybe there will be Downgrade focussed spirit in the next expansion. If it were medium complexity, it might make Dust obsolete. (In any case, I should update Dust's powers to say Downgrade.)

Patron Badge for 2009 through 2022
It's been a couple of years since I posted current prestige ratings for Decktet games. Despite a few more ratings, there's not much change. Myrmex has stepped up a spot.

The number of logged plays has crept up, but the order is mostly the same. The solitaire games, including Myrmex, have gained some ground. Unsurprisingly, the last couple of years have been prime time for solitaire.

Cristyn and I played 135 games of Spirit Island, mostly while doing laundry.

The only other game to rise to the level of at least five plays was The Crew. After vaccination was a thing, a few of us from the Zombie Planet Friday night crowd started getting together to play board games. We've fallen into the habit of starting with a few missions of The Crew before an old favorite— but there are enough old favorites that we've only done most of them once.

Patron Badge for 2009 through 2022
My tradition is to post a tally of my most-played games from the previous year. Not going to game night has seriously cut into that.

Moreover, illness and the general background stress of the year have meant that Cristyn and I haven't picked up a lot of different games. We've gamed mostly on laundry day, and we quickly go to what's comfortable. Spirit Island lost its grip on us briefly over the summer, but then the expansion arrived.

So here's the list of games that I played five or more times in 2020:

As usual, Unpublished Prototype is the catch-all for new designs mostly by other people.

All told, I played 34 different games last year for a total of 223 plays. Not too bad, I guess?

Changing of the guard

Patron Badge for 2009 through 2022
Cristyn and I have had several games that we played a lot: games that became our default game to play, that we'd play several times in a session.

The first of these was Dominion, shortly after it came out. We bought Intrigue, but didn't pick up expansions after that.

At some point, we got Race for the Galaxy and stopped playing Dominion. Race had the advantage that there wasn't as much setup for each game, so we could easily play three hands at a sitting.

Later, it was Sentinels of the Multiverse. We started using it as a laundry day game. One game of Sentinels took about as long as a load of laundry, so it filled the dead time in between sorting and served as a kind of timer.

Then we got Spirit Island, which has been our laundry day game pretty much ever since.

Evidence for this progression is my list of most-played games. Spirit Island has nearly caught up to Race for the Galaxy, but it has half as many plays as Sentinels.

Other games which we played a ton for a while include Escape: The Curse of the Temple and Altiplano, although we didn't play those to the same extent.

Decktet rankings as of mid-2020

Patron Badge for 2009 through 2022
It's been about a year since I posted current prestige ratings for Decktet games. The only change in the top 20 is that Carvan got a few extra ratings and crept past Colour Bazaar to claim #20.

The number of logged plays has crept up, but the order is mostly the same. The only change in the top 20 is Myrmex moving up one spot.

Patron Badge for 2009 through 2022
Quote:
Some foolish yokels think that faeries are timeless, changeless creatures. One can easily find proof to the contrary. Consider, for instance, the fae fascination with hockey. King Oberon observed hockey being played for the first time in December 1873. He wandered for a time before returning behind the veil that separates his world from ours.

That Summer— July or perhaps August 1874— he called together a troop of his kinsmen and had them play this new human game. They played for an endless afternoon, and when they were done they sat down in the failing sunlight. "The puck was too small," a hob insisted, seating himself on a rock. "We're used to a much bigger Puck here."

By September 1874, Oberon codified the rules of Faerie Hockey. It is tempting to think that the annual Seelie/Unseelie tournament must have happened since the dawn of time, but it can't have. Faeries change, and hockey proves it.

Oberon's Pucks is a quick playing two-player card game about a hockey tournament between rival courts of faeries.

I originally designed the game and drew all the line art in 2003, before the Decktet. I remember playing game after game of it in a laundromat in Maine. Fun times.

I dangled it in front of a few publishers. None bit, and I got distracted by other things. I pulled it out again in 2015 and made some small changes. Then, back in a box.

Now I'm offering it as a print-and-play game, because it seems like time. Printing and playing are two things we can still do.

There are 12 pages of cards, illustrated in glorious colour. You could print them in black and white to save on printing costs, and the game would work just fine.

If you make a build of it, post a picture!

EDIT TO ADD: And now it's in the BGG database. 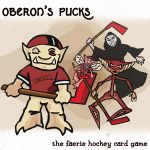 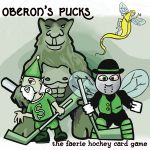