Not Necessarily the News

BGG News editor W. Eric Martin exhibits signs of obsessive completeness and complete obsessiveness – and invites you to join him in this fruitless, yet satisfying quest

BGG Style Guide: How to Propose Representative Images for Game Pages and Versions

Patron Badge for 2004 through 2023
I receive a lot of questions from designers and publishers, not to mention other BGG users, about how to place representative images on game pages, as well as on publisher and designer pages. For far too long, I've answered these questions individually, while telling people that I need to write up these processes to share them with the world.

Finally, I have done this, and assembling this post took far less time than I spent telling people that I will do this someday, a lesson I must keep in mind for the future: Create written guidelines once, then share them forever, revising as needed.

After all, BGG has hundreds of thousands of users. What a person asks once is asked by thousands of other people as well. We're reworking the front page layout right now — well, others are and I'm hearing about it in passing — and part of that front page will include guidelines for how to use this site. By writing up this material ahead of time, I'll have it ready to go (bar any reformatting for wiki's sake) once the front page is ready for launch.

With that preamble out of the way, let's get started, laying out the basics of image uploading for those who need a refresher...

How to Upload an Image

To upload an image on a game page, visit that page, then click on the "Images" tab, then click the blue +UPLOAD button at right:

To upload an image on a designer or publisher page, scroll down to the "Images" module on that page, then click Upload >> on the left.

A pop-up box will then appear on the game page. (For a designer/publisher page, you'll be brought to a new page.) Click on "Choose Files", then find the image file that you want to upload on your computer. Add a caption that describes the image. As for which gallery to choose:

Quote:
• If the image features one or more people and the people are the focal point of the image, choose PEOPLE for the gallery.

• If the image shows the game, the box, or unaltered components as they will appear in print, choose GAME for the gallery. (Digital representations of covers, cards, boards, boxes, and other flat elements should go in the GAME gallery.)

• Otherwise, choose CREATIVE as the gallery.
Uploaded images will be moderated by users via our GeekMod system. You can't moderate your own images, but you can mod those of other users! Go to GeekMod, then click "Images" to start looking at images and modding them.

Once an image has been approved — and you'll receive a message via Geekmail stating this — then you can view that image under the "Images" tab on a game page or in the "Images" module on a publisher or designer page.

How to Make an Image Representative on a Game, Designer, or Publisher Page

Each game, designer, and publisher page has a representative image to help users identify what the thing in question is:

• For a publisher, the representative image should be the current logo.

• For a designer, the representative image should be an image of the person in which they are recognizable and ideally on their own.
For a game page, go to the "Images" tab, find the 2D front cover image, then click on the three vertical dots underneath the image, then click "Propose Representative". 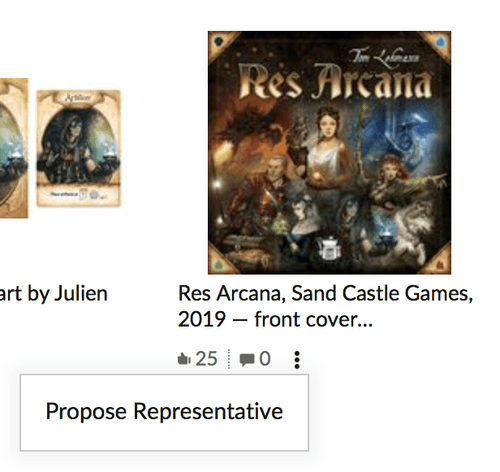 For a designer or publisher page, click "Browse >>" in the "Images" module, find the image of the individual or logo that seems most appropriate, then click [More...] underneath the image, then click "Propose Representative Image". 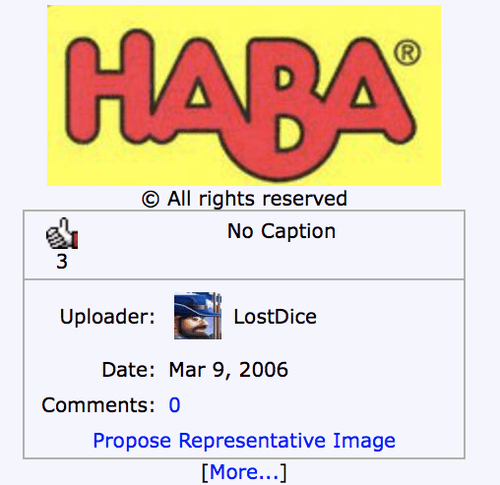 Whether for a game, designer, or publisher page, a pop-up box will allow you to include a note for those in GeekMod who will review your suggestion. (A note is not required.) As with the image submission process, any user (other than the submitter) can moderate this suggestion. To do so, go to GeekMod, then click "Data" to start looking at images that have been proposed as representative images (as well as images that are supposedly in the wrong gallery and are having a new gallery proposed for them).

How to Make an Image Representative on a Specific Game Version

Each game page has one or more versions. Images of games in the GAME gallery should ideally be linked to one or more of these versions. 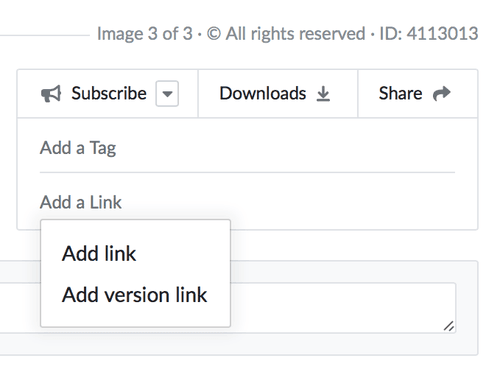 Your suggestion will go into GeekMod, and any user (other than the submitter) can moderate this suggestion. To do so, go to GeekMod, then click "Image links" to start looking at images for which links have been suggested.

Once an image has been linked to a version, you can choose a representative image for a specific version by going to the version page, then clicking on "Browse X images" underneath the depicted image on the version page. 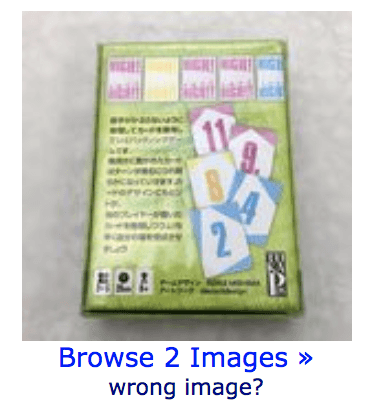 Find the image that seems most appropriate — namely the 2D front cover image — then click [More...] underneath the image, then click "Propose Representative Image". 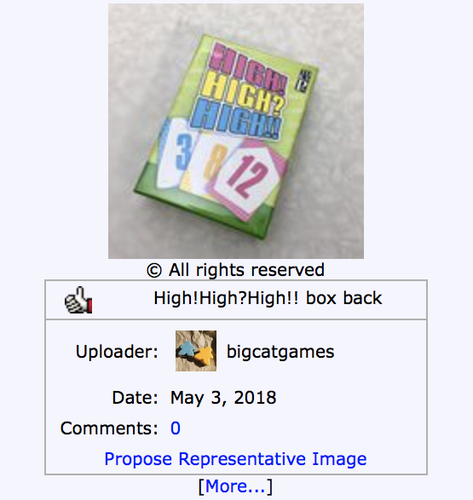 Again, this suggestion will go into GeekMod in the "Data" category.

Is anything unclear in the directions above? Have suggestions for how to present this material in a better format? Please leave a comment!

I see a lot of images in my role as BGG News guy, whether sent directly from publishers, in press releases, or on websites, and many of them feature the same problem: too much white space.

Why is white space bad? Because white space equals lack of game-related imagery, and when an image is viewed at thumbnail size – which is often the case on BGG – then the game itself looks tiny and adrift in a cloud. Here's one example from a press release I received via email: 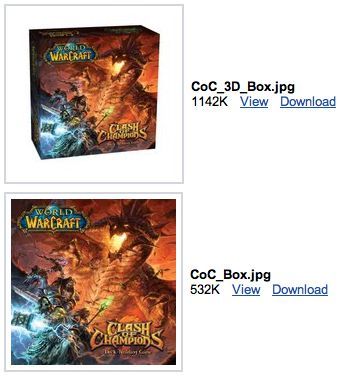 Thankfully Cryptozoic Entertainment goes through the trouble of including both a full cover shot and a 3D box shot, thus allowing people like me to choose the image that will work best on BGG – that being the image most visible at thumbnail size while also being a decent size for those who want to view it at medium. (Why not upload both boxes? Because they effectively provide the same content, but with one (after cropping) being slightly tilted and surrounded by meaningless white space. Better to have less noise on the game page. As an added bonus, I don't have to go through the effort of cropping the image with the 3D box to remove most of the white space.)

Here's another example of a 3D image versus a flat cover image:

Subtle difference? Yes, but why cede ground to white space when you can instead dominate that space with your game box. Take full advantage of the ground given to you. This next example makes the difference clearer:

Let's ignore the terrible misaligned punchhole on the tab at the top of the weirdly digitally-generated box and instead notice that one box looks larger than the other, making that image more recognizable at a quick glance.

Flat vs. 3D cover images isn't the only area in which one can be vigilant about eliminating the void. Here's the original image (600x600 pixels) of the logo for a publisher that's debuting in 2012: 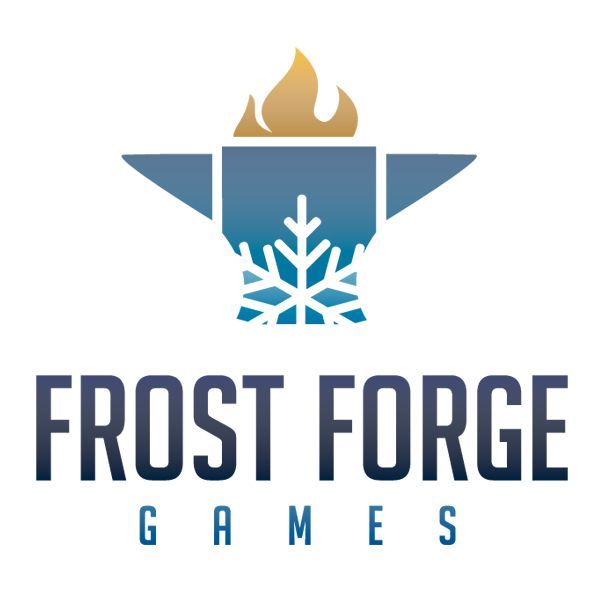 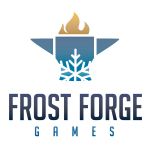 Still visible and clear, but what if you had cropped much of the white border from the original image? Now let's compare the thumbnails: 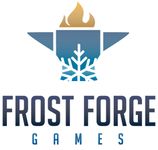 Maybe the difference isn't much, but I can see it and I'm sure you can, too. The less white space used in an image, the larger and crisper the important stuff will be.

On a mostly unrelated topic, I thought I'd share these two images from a certain publisher's PR department, the first being for The Game of Life: Adventures Card Game: 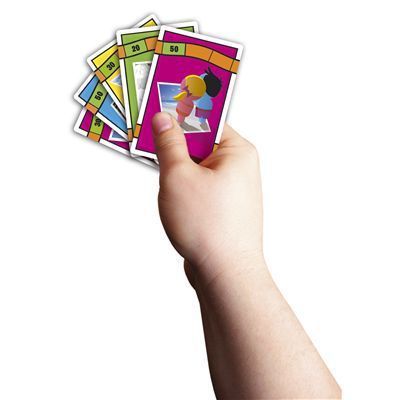 And the second being for Cluedo: The Card Game: 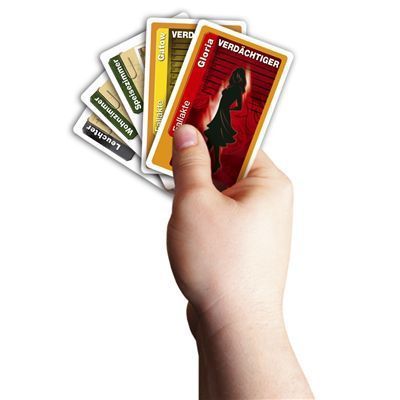 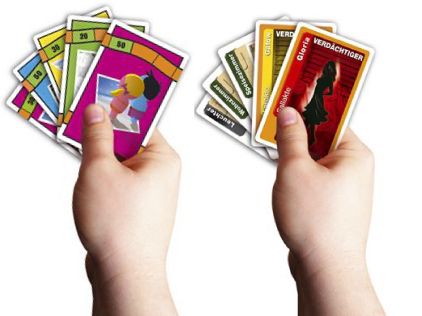