Greetings, all! Take a Seat has been published in Spain, and the game will be presented internationally at SPIEL '22. We thought it would be a good idea to post a design diary to share some background info, design decisions, art, and more.

In September 2019, we started our first design as a team. We had a clear premise: Create a roll-and-write game themed on scheduling the calendar of Santa Claus, who has a busy December managing reindeer, manufacturing presents, and visiting all the continents of the globe. 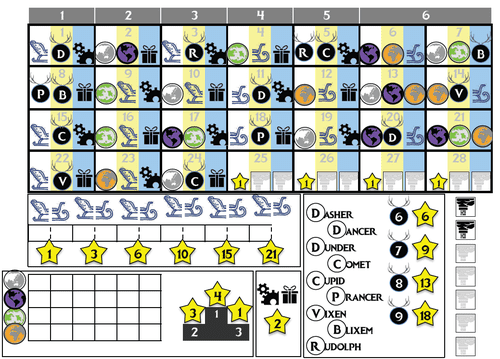 Santa Claus calendar
Some months after the first sketch, we changed the theme in order to make a non-seasonal game. Players are now scheduling the calendar of a Shakespeare company trying to represent different characters, build the scenery, rehearse with actors, and manage the theater seats. 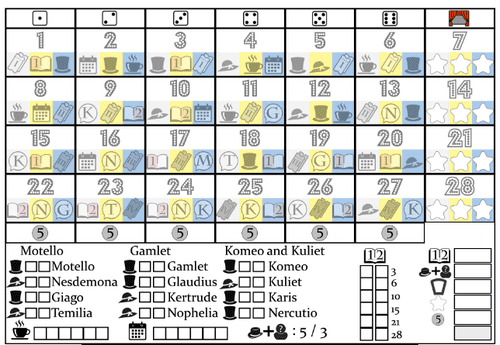 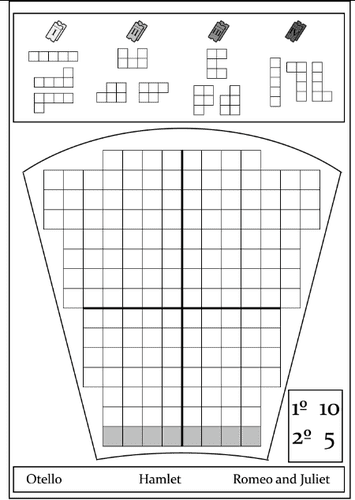 At this point, we realized that when we playtested the game, we really enjoyed the part about theater management, finding the rest of the game uninteresting.

We decided to start a new game using only the part that was really fun for us: managing a theater. We focused on two main points:

1. We wanted to create a roll-and-write game with its own identity. Could it be possible to suppress all the randomness coming from dice or cards?

Some inspiration came from Between Two Cities, in which you share cities with your neighbors. Perhaps we could share and strive for our target audience. We created the concept of "share-and-write", in which randomness is created through player interaction instead of by rolling a die or flipping a card.

2. We love polyominoes, and we wanted to introduce something that could not be implemented in a normal cardboard game. Writing on the board should have something special — Wait! Decreasing polyominoes, with you scratching them during the game and changing their shape. 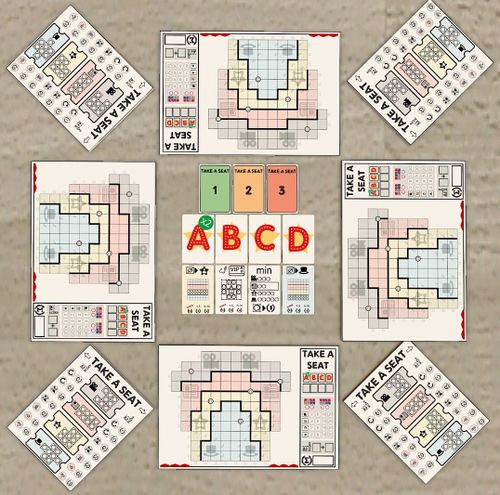 We worked hard during the first quarter of 2020 in order to test it at Protos y Tipos, a prototype convention organized by Ludo, the Spanish designers association. We obtained lots of ideas and feedback to focus on the final development of the game.

In October 2021, Gonzalo from Salt & Pepper Games contacted us for the first time in order to see the game, and later we signed the game at SPIEL '21. That was fast!


With a clear idea of the game concept, Meeple Foundry put a vintage flavor in all the design, making bright the lights of the whole game. 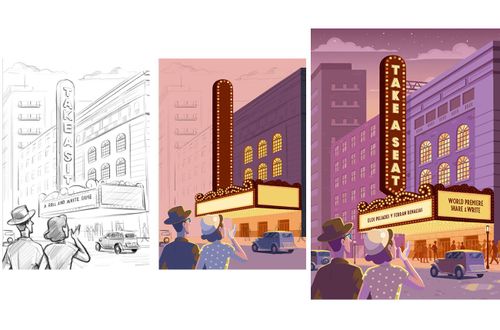 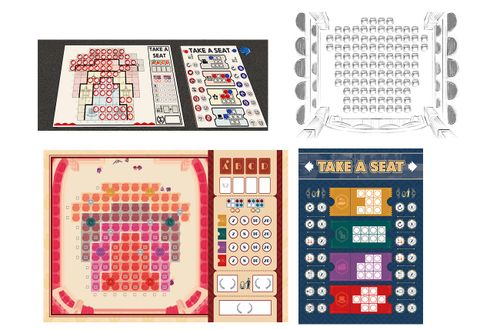 Game board
Finally! All preparations for the theater are over, and the final audience sits in their seats. Now if you'll excuse us, the show must go on! 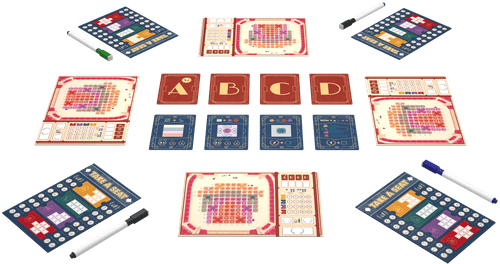 Designer Diary: On the Origin of Species

On the Origin of an Idea

I first met Gerard Ascensi several years ago studying for a mathematics degree. Years later, we met again around a table, playing board games in Barcelona and traveling to game events such as Cordoba International Festival or SPIEL.

In June 2017, I visited London and met Gerard, who had moved there. He always liked creating new things and playing games, so it made sense that he would try to design a game, but he did not know where to start. We talked about a number of his ideas for new games, the most interesting of which was this: a game with limited cubes that are used both as resources and as ownership markers of new cards that will provide resources in the next rounds.

Some weeks after this meeting, Gerard sent me an e-mail explaining how the game should work, and we created a rough, totally abstract prototype — using resources like A, B, C, DD, EE, FF, GGG, HHH, III — with the cards that you could buy activating resource production and giving you a bonus each time another player wanted to use it.

We playtested the game a couple of times and felt that the idea was interesting enough to continue working on it. 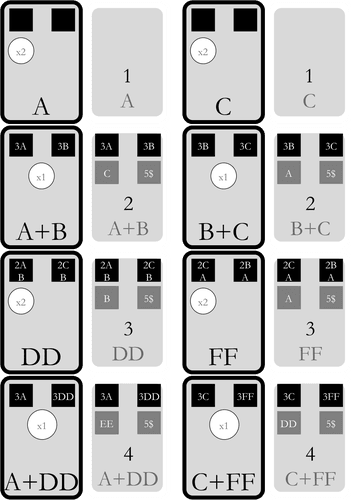 Front and back of the cards from that first idea 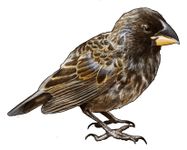 Learning: Creating board games in a team is an opportunity to reach out of your comfort zone, sharing and learning from others' approaches and development proposals.
On the Origin of a Theme

We focused on finding and integrating a theme in the game, trying to help our initial ideas be as natural and intuitive as possible. Our first attempt was "The Exorcist", for which we:

• Reduced the nine abstract resources to six: crosses, holy water, and candles, with two power levels for each.
• Added cards representing five house levels to create a 4x5 creepy town.
• Introduced meeplexorcists that moved across the streets between the card houses, sometimes blocking other players' movement and taking resources from unhaunted cards.
• Added an auxiliary board with bonus tracks where players obtained additional resources and cubes while they de-haunted the town. 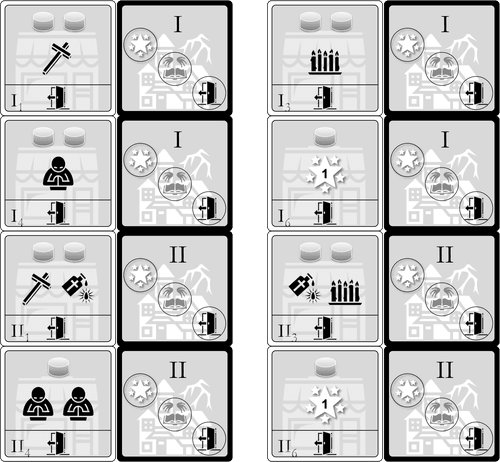 Cards of The Exorcist

We playtested "The Exorcist" in a meeting organized by LUDO (the Spanish Boardgame Designers Association), and we noticed that the game did not work properly:

• Players didn't enjoy it due to a lack of interesting decisions and the "messiness" of the design.

• Another important feedback was that the theme did not match the sensation of growth during the game. We received theme suggestions such as the construction of a Gothic cathedral, army creation, genetics, dinosaur time, and also species evolution...

Learning: Listen carefully to all feedback and ideas from playtests. Some of them may end up being the solution of the theme of your game.
On the Origin of a New Game

Following this feedback, we noticed that it was mandatory to change the theme, and we loved the idea of genetics and the evolution of species. At this point, we decided to move the game backwards instead of introducing several patches to what already existed in order to fit the theme:

• Players would be forces of nature creating new species by mixing genes.
• We replaced the meeples moving around a town with a map to place the new species, following some adjacency rules.
• We borrowed the Power Grid market mechanism to manage the availability of new species. This improved the gameplay, minimizing the maintenance steps and becoming the main engine of the game. This mechanism remains in the final version of the game.
• We simplified the six exorcist resources to three kinds of genes, which represent the gene characteristics of the new species and the capability to adapt at water, air and earth.
• We looked for species that fit gene costs. In this step, player excitement appeared when discovering new species, creating an interesting "Wow" effect. We were on the right path. 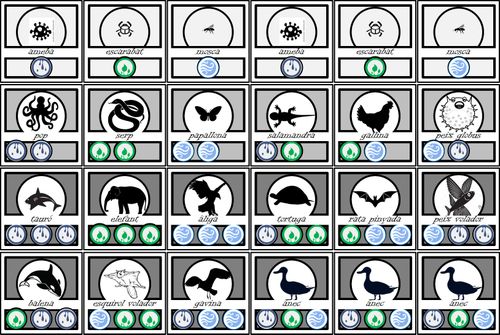 A first version of the tiles — can you find the blowfish, flying squirrel, or flying fish? 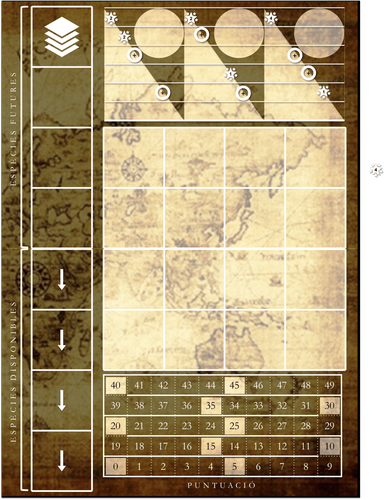 First version of the board, with the market mechanism implemented

In May 2018, I met with Gerard in Barcelona to test the game around the same table for the first time, and we noticed that all the changes had radically improved the game. We liked how the game had evolved, and we were in a position to start polishing it.

Learning: If you are stuck in the design process, force yourself to move backward, starting again with a blank sheet. Reuse the core rules and concepts, and discard the unnecessary ones.
On the Origin of a Published Game

We decided to test the game as much as possible with the general public, using several game conventions near Barcelona. We focused on the game length, the rhythm of play, and player engagement. We also visited several playtesting groups at Barcelona and London, obtaining valuable feedback that lead to some rules adjustments. 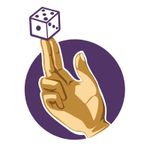 That summer, at the end of a playtest session, a publisher told us that Mont Tàber was looking for games and that On the Origin of Species could work for them. We met with José Maria and Xavi to play the game, and they agreed that it could match their catalogue line. After several meetings and the implementation of some proposed changes, we signed the contract. The game was going to be released!

The publisher liked the game, but there were two significant points that should be improved. For the rest of the development we focused on (1) increasing the number of interesting decisions while preserving simplicity and (2) ensuring the theme was consistent with the mechanisms:

• We settled on the final theme of the game: Darwin's trip to the Galapagos.

• We replaced three bonus tracks with three decks of cards: the final scoring books, characters from the beagle crew, and objects that could have been used by Darwin. We tried to balance the actions so that it was not trivial to choose one instead of another.

• We worked on different grid shapes of the board, going for an hexagonal grid of squares that simplified the adjacency rules. We also introduced the Beagle route and calendar, linking it to the real history.

• We changed all the species in the tiles, including only Galapagos species and adjusting their costs to their characteristics. 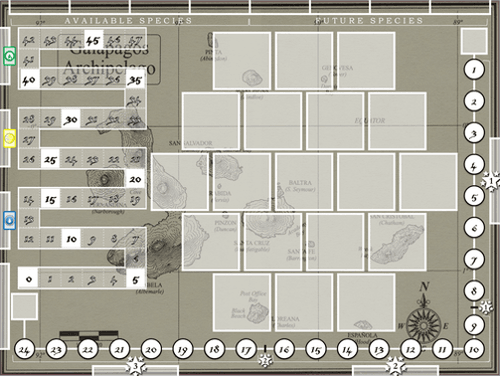 The first board with the hexagonal distribution of tiles 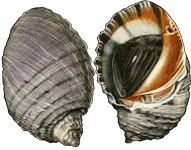 Learning: The publisher probably will show you a complementary view of your game. If possible, use their opinions to improve the game with your own style.
On the Origin of the Final Art

Mont Tàber started working on the production of the game — number of cards, tiles, etc. — while also finding the perfect artist to illustrate it: Amelia Sales. We were excited as soon as we saw the final art. The game was shining, and Amelia's Victorian style was fantastic. 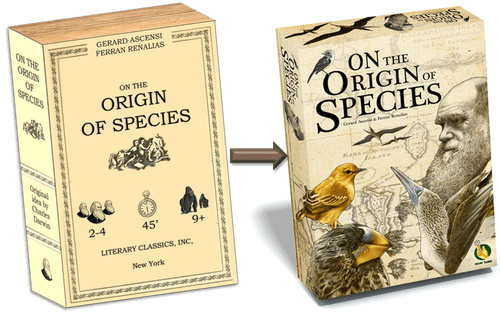 Board: Final prototype vs. final design

Learning: However much you imagine your game will be improved with the final art and design, you'll probably still be overwhelmed the first time you see the results.