Korea Boardgames has revealed three titles for early 2020 release that feature a variety of themes and that all play in 45 minutes or less.

• Four Gardens is an Asian-themed set collection game for 2-4 players from Martin Doležal:
Quote:
Long ago, in a beautiful Eastern kingdom, a queen and her people pleased their Gods by building a mystical pagoda. The pagoda housed the four Gods and towered strong over the magnificent kingdom.

As time passed, the queen fell ill, and she summoned her people to compete for her crown. The crown would be passed on to the person who could build the most pristine garden around the pagoda. The heir would be chosen by the four Gods themselves. 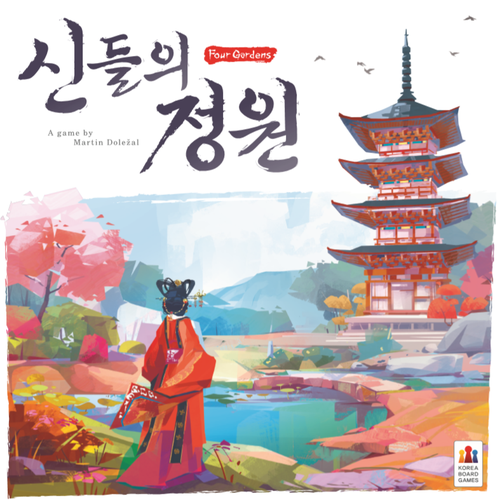 In Four Gardens, players compete to score the most points by pleasing the gods with beautiful panoramic views of gardens called (as you might expect) "panoramas". In order to create panoramas, players first need to lay groundwork cards that each have specific resource requirements. Players must then gain the necessary resources to complete their groundwork cards by turning a 3D pagoda. (We'll be recording an overview video of this at Spielwarenmesse 2020, but for now you must imagine what "turning a 3D pagoda" entails.) Once a groundwork card's requirements are satisfied, it becomes a landscape card, and multiple landscape cards placed in the correct order form completed panoramas to score points.

• Jun-ichi Shinde's Fruit Picking first appeared in 2014 as a co-production by ChagaChaga Games and Shinde's Uzumaki Switch, and at the end of January 2020 Korea Boardgames will release a new edition of the game — still bearing the Fruit Picking name — that features new artwork, game boards, and rules for solo play.

Here's a quick summary from the publisher:
Quote:
In Fruit Picking, the players become fruit farmers who plant and pick fruit and trade them with Market Island. The goal is to collect a set of all market cards from one of the four districts of Market Island.
On a given turn, players use a mancala mechanism to take all seeds from one space on their fruit island board, then distribute them clockwise to establish their "pick" farm for this turn. Then they can optionally choose to either add more seeds to their "pick" farm or pay seeds from their "pick" farm to trade and receive the corresponding Market Island fruit card. The game ends as soon as a player collects all cards from one of the four sets of market cards. 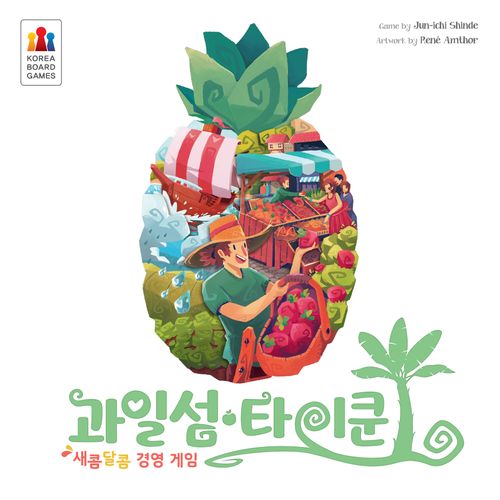 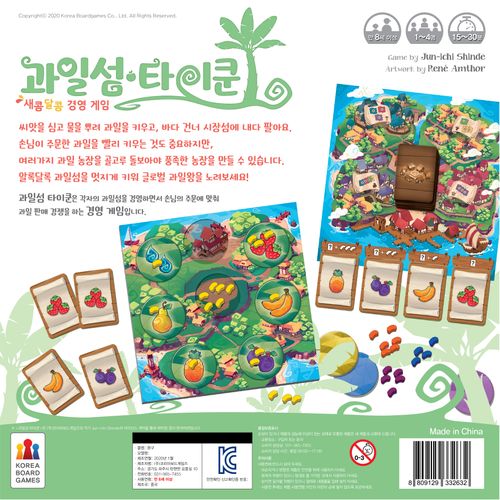 • Luca Bellini and Luca Borsa's Monster Dentist is a fast-paced, pattern recognition game in which players simultaneously use "mouth mirrors" — those small round mirrors on plastic handles that you find almost exclusively at a dentist's office — to examine monster mouths, then place tooth tokens on their player boards with the goal of matching the game's problem cards faster than their opponents.

A round ends when the first player to complete their board shouts "Diagnosis!", and if their player board matches the problem card, they keep the card. The game ends as soon as a player collects their third problem card. 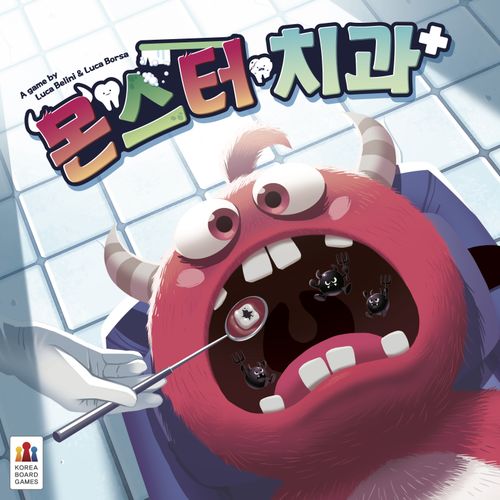 [Editor's note: I was hired by Korea Boardgames to edit the rules for Monster Dentist, so I asked Candice to write up this post about the company's offerings instead of me doing it myself. —WEM] 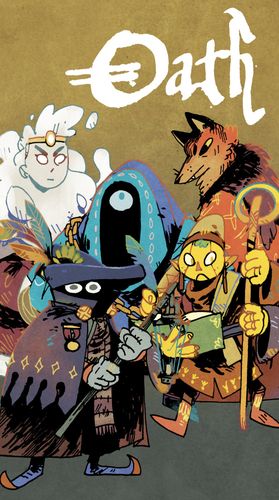 [Editor's note: Given that the number of games being released isn't slowing anytime soon, I've been looking for folks who are interested in writing about upcoming games for BGG News. Candice Harris, who has appeared in multiple GameNight! videos, makes her debut here, and as she alludes to in her opening lines, her game tastes swing heavier than mine, which is great since she can cover certain titles in more depth than I ever would. —WEM]

With the new year comes new games, and I'm happy stepping up to write about games that put Eric into a fog. One I'm particularly amped about is Cole Wehrle's Oath: Chronicles of Empire and Exile. After playing Pax Pamir (Second Edition) in 2019 and literally falling in love, followed by Root, which I played for the first time shortly after, I quickly became a big fan of Cole Wehrle. I'm fascinated with his thought process and the depth that he pours into his game designs.

When I started hearing teasers about Oath, I immediately subscribed to its BGG game page and started drooling whenever I read Cole's designer diary posts. I knew, after his first post in October 2019, that I had to have this game in my life. From what I've read and seen so far, Oath seems truly unique with its adaptive gameplay that evolves game after game, but doesn't lock you into playing with the same group. Needless to say, I was thrilled to hear Leder Games announce that Oath will be launched on Kickstarter on January 14, 2020. Mark your calendars!

So what is Oath all about? Here's an overview from the publisher:
Quote:
In Oath, one to five players guide the course of history in an ancient land. Players might take the role of agents bolstering the old order or scheme to bring the kingdom to ruin. The consequences of one game will ripple through those that follow, changing what resources and actions future players may have at their disposal and even altering the game's core victory condition.

If a player seizes control by courting anarchy and distrust, future players will have to contend with a land overrun by thieves and petty warlords. In a later game, a warlord might attempt to found a dynasty, creating a line of rulers that might last generations or be crushed by the rise of a terrible, arcane cult.

Oath has no fancy production tricks, app-assisted mechanisms, or production gimmicks. The game can be reset at any time and doesn't require the same play group from one game to the next. A player might use the fully-featured solo mode to play several generations during the week, then use that same copy of the game for Saturday game night with friends. There are no scripted narratives or predetermined end points. The history embedded in each copy of Oath will grow to be as unique as the players who helped build it. 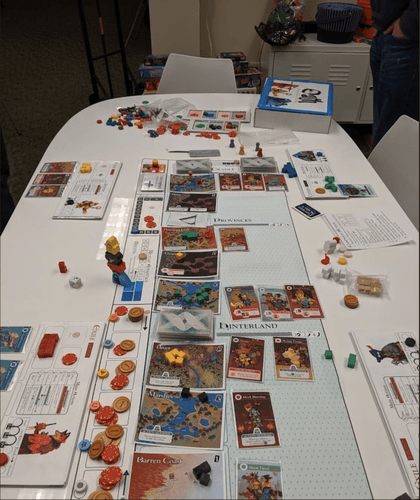 Prototype components
Cole Wehrle has spent several years on deep thought and prototyping, taking inspiration from a wealth of books and games that have impacted his vision for Oath: Chronicles of Empire and Exile. Oath plays with 1-5 players in 60-90 minutes and supposedly even plays very well with two, which is fantastic. The fact that set-up and tear-down are both clocking in at about five minutes or less is also impressive. As always, I'm sure that will all vary depending on who's playing, but it sounds promising, especially for those weeknight gaming sessions. I also find it interesting that the game changes after each session, but you don't need to continuously play it with the same group like most legacy-style games. As Wehrle mentions in his fourth designer diary for Oath:
Quote:
Oath essentially remembers three things. First, it remembers a portion of the game's map, which also holds the various rules modifications in play. Second, the game remembers many of the characters, enterprises, and ideas of the previous game in the form of the game deck. This deck will also change from game to game based on how the previous game was played. Finally, the game remembers how it ended, and will adapt the victory condition for the next game in response to this victory condition.
Oath has asymmetrical aspects that I tend to find interesting when pulled off well. One player will play as the Chancellor, while the other players are Exiles. Players start the game in equality for the most part, then over the course of the game and future sessions this situation evolves depending on how the players play the game. Sounds like no shortage of player interaction to me!

Oath is a shared tableau builder featuring multi-use cards and a refreshing map system that I'm still wrapping my head around. As Wehrle notes:
Quote:
The map is made up of a number of sites which can each host a number of cards. The cards represent the many characters and institutions that populate this world (and change the nature of the game). Essentially the game's map is a shared tableau, which all of the players help build and tear down.
Not to mention Kyle Ferrin's fantastic artwork to further immerse us into the world of Oath. Root fans will find it familiar, yet it stands out as a part of its own world. Wehrle and Ferrin have proven to make a fierce duo when it comes to melding artwork and game design.

Oath sounds like it's going to provide quite a unique gaming experience which I'm really looking forward to. Whether you're a fan of Root or any of Wehrle's previous releases or not, Oath appears to be a completely different animal that is definitely worth checking out. You can do so in depth by watching this playthrough on a prototype that was streamed on Twitch in late December 2019. Cheers!