Via Gorilla Marketing, Roxley Prepares for Skyrise and Steampunk Rally Fusion in 2020

I haven't covered anything from Canadian publisher Roxley in a while, and that's partly because I sent questions to Adam Wyse a few times and each time he'd respond, "Not yet. We're still working on that." and partly because the company has indeed had its head down working on many things to announce at once, specifically now.

Says Wyse, "2020 is going to be the biggest year yet for Roxley, with more new game releases than we've ever had. The Roxley team has grown a lot recently, and we have been working hard on development of new titles, and reprints, localizations, and support improvements."

To start with, Roxley has been overhauling its website, and I know how long such things can take. "We have spent a lot of time and effort putting together a site we are very proud of", says Wyse. "You will be able to find out about our current and upcoming games, watch instructional videos, download rulebooks, and keep up to date with our latest news. We are putting the last touches on the site as of the time of this post..." Roxley also plans to include monthly status reports on the progress of various projects in its email newsletter.

As for games, those start to appear with the March 4, 2020 retail release of Gorilla Marketing, a party game from Wyse for 3-8 players that presents players with the following realistic set-up:
Quote:
Here we have an advertising agency with a problem. To hear the CEO tell it, the fault lies with his "idiotic advertising execs". But the more immediate problem facing the firm is the fact that he has just fired them all! Even witnesses down on 4th Street could hear his rage-fueled tirade that he ended with "I COULD REPLACE YOU MORONS WITH GORILLAS AND GET BETTER RESULTS!!!" Cut to a month later, and his solution was exactly that. The old grouch replaced all of his employees with a bunch of primates: you and your opponents. This is the glamorous life of 1960s advertising execs.

Gorilla Marketing is a party game of naming ridiculous products, movies, companies, bands, college courses, or food trucks! It is played over two rounds: In round 1, you name the thing, and in round 2, you write the advertising tag line for it.

Bananas and other bits
Round 1 starts by each player picking a category and putting it at the top of their booklet. In the movie pack, for example, these categories might be something like Horror or Western. Each turn, pass booklets to the left and roll the dice to form an acronym. Players must use the letters that were rolled and write down the name of a ridiculous movie that fits the acronym and the category of the booklet in front of them. Once your booklet comes back to you, it's time to use the crazy awards on your card to judge the best answer. Which of these Western movies features the "Closest Close-Up"? The gorillas with winning titles will earn what we're all after: bananas!

In Round 2, we're passing booklets around again, using acronyms to write the advertising tag lines for the winning titles from Round 1. The best tag lines will earn MORE BANANAS!
Ahead of the game's release, Roxley is offering a preorder bonus through February 24, 2020. 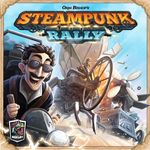 To coincide with gorillas making their way into the board (game) room, Roxley is launching a Kickstarter project for Orin Bishop's Steampunk Rally Fusion on March 3, 2020, with this being a standalone game that can also be combined with the 2015 release Steampunk Rally. What's being fused with what? Here's an overview:
Quote:
Steampunk Rally Fusion introduces new tracks with unique event cards, new part abilities (Gear Up and Overcharge), and a new card type: Secret Projects. It also debuts new custom dice representing powerful Fusion energy!

Take on the role of ingenious inventors from history. Draft cards to invent your racing contraption. Power your creation's abilities with combinations of steam, heat, electricity, and Fusion dice. Use cogs to augment bad dice rolls and upgrade certain machine parts. 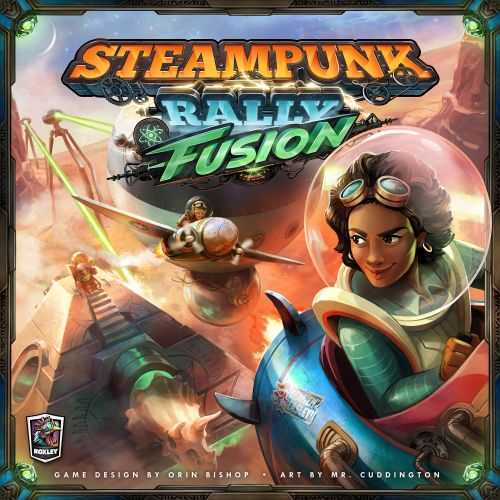 Smashing through damaging terrain spaces may cause parts to fly off your machine, constantly forcing you to adapt your strategy and discover new card synergies. Fortune favors the brash, so get ready to Gear Up, Overcharge your machine, and remake history!

• That Kickstarter campaign will be followed in Q2 2020 by another, this time for Skyrise, a re-working of Sébastien Pauchon's fantastic spatially-based auction game Metropolys, which debuted in 2008 from Ystari Games.

Skyrise is credited to both Pauchon and Wyse, and the game has a very "Roxley" look to it that mirrors the Ystari vibe from more than a decade ago. As for the setting and gameplay, here's an overview:
Quote:
After centuries of advancement, humanity has created a utopian society in which every need has been met with complete abundance, every need but one: room to build!

In Skyrise, players are the visionary architects who will work together to overcome this by building humanity's most ambitious project: a glorious new city in the sky itself, dedicated to art and beauty, on which each player will compete to leave their personal artistic signature, gaining prestige throughout the ages.

''Skyrise'' uses a similar spatial bidding mechanism to ''Metropolys''. Players begin their turns by placing a numbered bid in an available neighborhood. Players pass or raise the bid by placing a higher-numbered bid in an adjacent neighborhood until all opponents pass or there is nowhere available to bid. The high bidder builds their building where their final bid was placed, then begins the next bidding round. 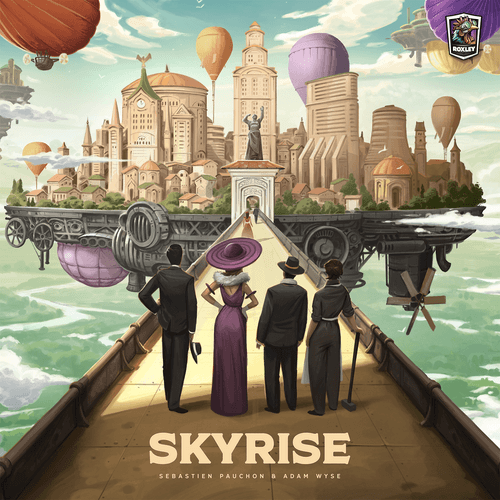 ''Skyrise'' honors the spirit of ''Metropolys'', while raising it to new heights. Bidding tokens now have unique numbers, creating interesting new auction dynamics. The beautiful and multilayered modular board multiplies the game's replayability. The strategic depth already offered by public and private goals has been enhanced by a new specialization system that allows players to accelerate their scoring engine as the game progresses, powerful monuments drafted mid-game that provide unique and variable opportunities to enhance or change your strategy, and special power tokens that when earned and played cleverly can create the epic turning points that will elevate the greatest builders to their ultimate victory.

Welcome to the future — the future you will build and try to leave your mark on!