Non-final box
At Spielwarenmesse 2020, as at most conventions, I played very few games as work crowded out almost everything other than eating, sleeping, and trying to catch up on other work. The only games I played were The Game: Quick & Easy (five times with Lincoln and others, and I've already covered that title in detail here, Zen Garden (covered a bit here), and Glasgow, a design from Mandela Fernandez-Grandon that will be Lookout Games' next release in its two-player game line.

I've played only once, and the graphics and art are unfinished — possibly the development as well — so let me keep the overview at a fairly high level. First, here's a basic description:
Quote:
In Glasgow, players travel the city (in an abstract manner) to collect resources, take special actions, and most important of all construct buildings. Build a factory, and you'll receive more goods from it when other buildings are constructed in the right areas in relation to it; build a train station, and you may or may not score from it depending on what else you build; build a monument, and you'll merely collect a lot of points — and in the end, points are what matters. 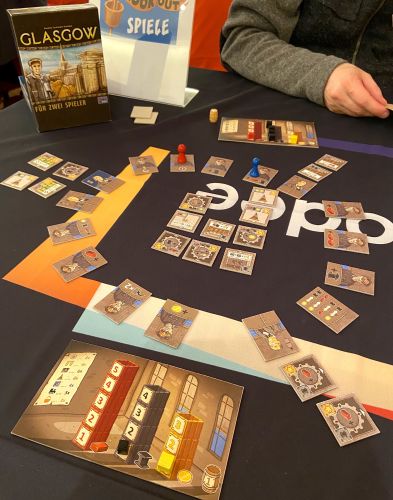 Mid-game situation
In slightly more detail, to set up the game, lay out a ring of town figures at random, with two of them being removed from play each game. Whoever is farther behind in the circle around town takes the next turn, advancing to whichever town figure they want to visit. Most of them give you resources — brick, steel, or money — and you have a limit on how many resources of each type you can hold. Some figures have two random building plans at them, and if you visit one with the right resources, you can pay them, then build something. If you pay extra, you can then build something else, too!

The first building is placed anywhere in the midst of play, then each subsequent building is placed adjacent to something already built, with the buildings eventually filling in a 4x4 grid of the players' own creation. As soon as the sixteenth building is erected, the game ends and players score points for what they built. Who has contributed more to the current state of Glasgow?
Glasgow has lots of elements you've seen in other games: a time track for movement, as in Lookout's Patchwork and many other designs, which forces you to waver constantly between jumping ahead to grab the thing you really need (at the expense of giving the opponent everything you pass) vs. trying to grab an extra item or two; resource management with a ceiling on how much you can hold so you must surf between collecting and spending, with both extremes being less than ideal since they'll force to make bad choices during movement; and scoring combinations on buildings that encourage you to collect all of this one thing or one of each of these other things or those third things in these places. 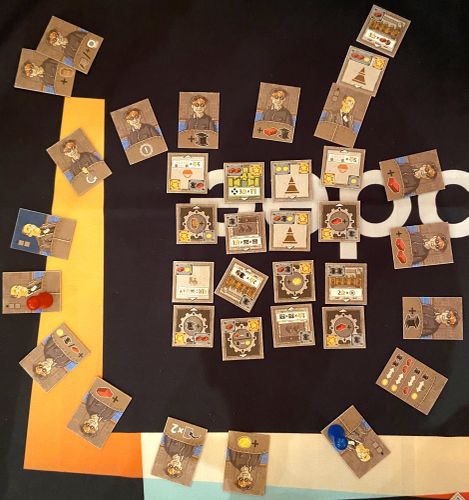 Final city layout
A few townspeople offer special actions that go beyond collecting and spending: One lets you trade goods in your hold, another grants you a barrel that serves as a joker item as beer is apparently a universal currency in Scotland; another lets you use the next card you land on twice, and still another allows you to flush building plans from an architect's hands, which is great for both stifling the opponent or pulling the slot machine lever for what you need.

In one sense, Glasgow falls in the same bucket as Lookout's Mandala, which I raved about here, as it feels like a classic, no-frills, well-honed design. You want a twenty-minute game that will deliver something fresh (thanks to the randomization), yet familiar (thanks to its design core) each time? Then here you go! Lookout has had a solid record of developmental success for more than a decade, and you can feel that knowledge at work in Glasgow as the game flows well and you can jump into it almost immediately thanks to iconography that tells you almost everything you need to know.