New Game Round-up: Welcome New Lords of Vegas, Control Europe in The March of Progress, and Prove Yourself a Wizard Yet Again 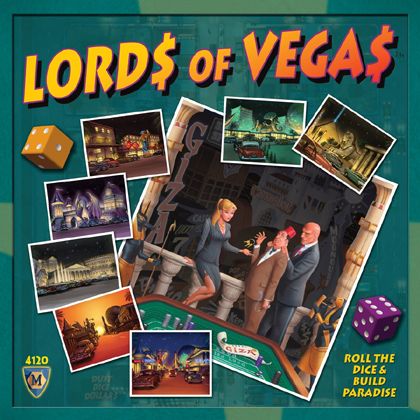 Let's pause the NY Toy Fair 2020 reports for a moment to dip into other game announcements, partly to stay up-to-date on things and partly so that I can close a few tabs on my browser. I like to leave everything open to impose a constant sense of guilt for what I haven't yet done, but even I have my limits. Anyway...

As you might have noticed, Underworld has not been released, and as of Feb. 26, 2020, Selinker reports that the rights to the game have returned to the designers, so they plan to bring the game back to market as a Lone Shark Games title. Selinker notes that plans are still being locked down with final details to be announced in March 2020, but here's what they have so far:
Quote:
—We believe we will soon be able to sell copies of the Lords of Vegas base set and the very-hard-to-find expansion Up!
—We hope to make the long-awaited expansion Underworld this year.
—We hope to put together a 10th anniversary deluxe edition or something like it.
—We also regained the rights to our popular poker book Dealer's Choice: The Complete Handbook of Saturday Night Poker. We hope to publish a 15th anniversary edition of that too.
—We're building a Kickstarter for all that. We hope to launch it ASAP.

One of my favorite game experiences ever came from me teaching Lords of Vegas to a group at BGG.CON, then watching the game unfold over two-and-a-half hours — far longer than the normal playing time — with those players going at one another constantly and negotiating forever on trades, with the experience being akin to a play in which mother and daughter and the daughter's boyfriend and fourth person who I don't recall discover a lot about their inner wants and needs, with the game-playing being the trigger that brought such discoveries to the surface. It was amazing.

• Following other recent game announcements, U.S. publisher The Op has revealed that a new Harry Potter game will join its catalog next to Hogwarts Battle, Codenames: Harry Potter, and Harry Potter: Death Eaters Rising. So much Potter!

The new title is a 2-4 player worker placement game called Harry Potter: House Cup Competition that gives people yet another chance to call "dibs" on their favorite Hogwarts house:
Quote:
Welcome to another year at Hogwarts School of Witchcraft and Wizardry! The House Cup calls for the brightest students to use gained knowledge and magic to learn lessons and complete challenges. Players send iconic characters like Harry Potter, Cedric Digory, Cho Chang, and Draco Malfoy out on the game board to enhance their skills. The player who earns the most points for their House will be named the House Cup Champion!
The game lasts seven rounds, with players storing their points in test tubes akin to the scoring registers in Hogwarts, although Dumbledore will just give the win to Gryffindor at year's end anyway, so why bother? 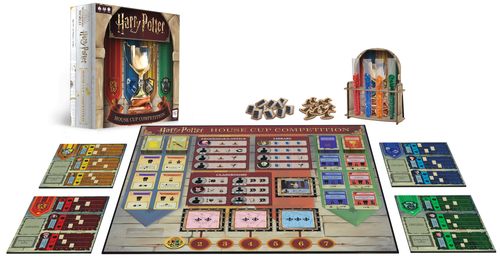 • UK publisher Surprised Stare Games is running a crowdfunding campaign (KS link) for two new games, one being the two-player game The March of Progress from SSG's Alan Paull. (Technically, the KS campaign is being run by Spanish publisher 2Tomatoes, which will release these games in Spanish and French, with Frosted Games releasing the titles in German.) Here's an overview of this design, which will debut at UK Games Expo in June 2020:
Quote:
Your goal in The March of Progress is to control countries through the playing of action cards so that you generate victory points (VPs) during scoring. Whoever has the most VPs at the end of the game wins.

In the game, each side has a hand of eight action cards, ranging from Move to Attack to Recruit. Each player simultaneously chooses one card to play each turn, then reveals and carries out the action. Cards stay discarded until a player plays their score card after which they regain all played cards.

The March of Progress includes an introductory scenario based on The Thirty Years War to set out the core rules of the game. The game includes four additional historical scenarios: The Age of Marlborough, Vive l’Empereur, World War 1 in the West, and World War 2 in the West. Each scenario changes the set-up and tweaks the rules to give a flavor of strategy in different time periods. The scenarios create a varied and challenging two-player game.

• The second SSG title is a co-design between Paull and David J. Mortimer, a 1-2 player game titled The Ming Voyages, with the game using multi-function cards along the lines of Mortimer's earlier design The Cousins' War. An overview:
Quote:
"The Ming Voyages" are the seven journeys made by the Chinese treasure fleet of oceanic junks between 1405 and 1433. The Yongle Emperor constructed the fleet during a period of outward-looking expansion of Chinese influence overseas, and its commander was Admiral Zheng He. The maritime power of the Ming Empire was used for political purposes, not just for trade. The immense fleet was technologically far in advance of European counterparts until at least the 18th century. While it is purported by some that the fleet circumnavigated the world and discovered all its continents save Europe, the voyages certainly reached Calicut in India and Hormuz in the Persian Gulf, while making landfalls in the Arabian Peninsula and East Africa — but on the landward side of the Empire, border troubles were always brewing.

In The Ming Voyages, one player will be the Ming Emperor who is trying to complete all seven treasure voyages, in addition to protecting the Chinese borderlands from invading barbarians. The other player controls the three disparate barbarian factions who are trying to settle on the borderlands with China. Battles can occur in these borderlands, with players use their three dice to roll for triples, doubles, and singles that are better than their opponent's rolls. Reserved cards can be used for re-rolls.

The game uses multi-function cards to provide actions for players to reinforce their armies and attack the enemy and for the Emperor to complete voyages. Play of a card may provide an out-of-turn action for the opponent, so players must be careful of timing. Only the Emperor draws new cards. Players swap hands at the end of each turn, so the Emperor always knows what the Barbarian Overlord holds, and each player tries to exploit the out-of-turn actions.