Great Scott! In early April 2020, Ion Game Design and Sierra Madre Games launched a Kickstarter campaign for the second edition of Pax Renaissance and their latest addition to the Pax series: Pax Viking. Whether you're already a fan of the series or simply Pax-curious, there's no better time to delve into this deep, historically rich series of strategy games.

If you don't know what a Pax game is, think of it like this: In traditional wargames, players represent nations maneuvering pawns on a map, but in Pax games, players ARE the pawns. With the exception of the future-focused Pax Transhumanity, Pax games are historically based strategy games driven by a card market in which players have a couple of straightforward actions each turn, most commonly buying a card from the card market or playing a card from your hand into your tableau. But beneath the deceptively simple actions comes a wealth of decisions that often gives players the tension of a high-stakes chess game at every turn.

Pax games tend to have multiple paths to victory that are often triggered in clever ways to keep players on their toes. I'd imagine it takes even the most skilled players several games to internalize the rules before you can even begin scratching the surface of each Pax game's strategic depth. In fact, you could have the rules down to a T and still not have a clear understanding of what exactly you need to do outwit your opponents and win the game. It's no wonder Pax games are so often described as "opaque". 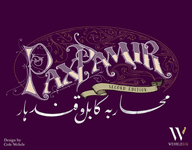 Since its release in 2019, Pax Pamir (Second Edition) from Cole Wehrle has been dubbed the most accessible Pax game in the series, and I totally agree. I've played with many friends who were either uninterested or intimidated by all things Pax, yet they all ended up pleasantly surprised with how much they enjoyed it in spite of their initial skepticism. Though Pax Pamir (Second Edition) is unarguably very accessible compared to its predecessors (i.e., Pax Porfiriana, Pax Renaissance, Pax Emancipation), and even Pax Pamir first edition, it certainly is no walk in the park in terms of complexity. There is still plenty of room for a lighter weight contender in the Pax ring — enter Pax Viking.

• Pax Viking, designed by Jon Manker and developed by Phil Eklund, is intended to deliver the signature Pax gaming experience with a much flatter learning curve, making it even more accessible for easing players into the series. Not only is the concept of an entry-level Pax game unique, but Pax Viking even has round cards(!?) to set it apart from the others. Here's an overview from the publisher covering the theme, who you are, and what your goal is:
Quote:
Pax Viking is a strategic, historical card game for 1-6 players, ages 12 and up, about the less known Vikings, those who travelled eastwards. These came primarily from Sweden and were for the most part merchants. They were skillful opportunists both in matter of silver and axes and were ready to use whatever works best as a tool in the current situation they encountered. They did so with the same adventurous explorer mindset found among the westward-traveling Vikings, and reached far to the south and east in their journeys, forming many strong connections and founding societies and future empires on their way. 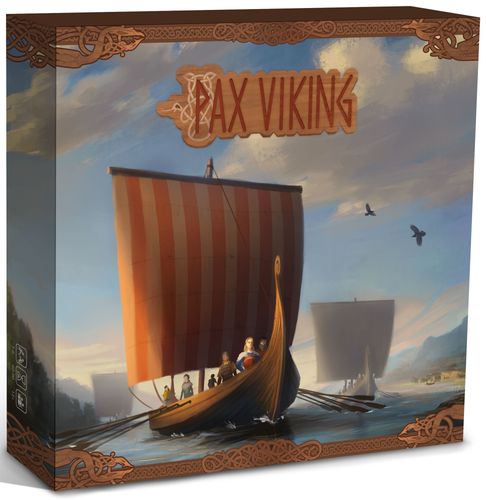 Prototype box cover
In Pax Viking, you represent a Jarl, one of the powerful leaders in the nordics during the 10th century that may have had ambitions towards ruling Sweden. The game takes place just before the turn of the previous millennia. Your goal is to build your family's power through trade, personal connections and smart, but sometimes deceitful actions with the ultimate goal to become the first King to rule Sweden.

There are four main paths that history may take. During the game, you strive to have a high reputation in one or more of these:

1. Sweden through a stronger centralized ruling where Sweden becomes a unified country, with a heavier emphasis on trade and networking.
2. Rus where the new strong areas in the east, founded by the Swedish Vikings, become a closer part of the Swedish Viking culture and eventually a part of Sweden.
3. Theocracy by succumbing to the growing and expansionist political system Christianity, which is spreading throughout Europe.
4. Jarldom by sticking to the more raiding-oriented, decentralized Jarldom structure that has served your culture well during centuries.

The window of opportunity to win comes through the event cards. Every time an event card is played during a winter action, it will include a check-for-win for one or more of the four paths.
• Pax Renaissance, designed by Phil and Matt Eklund, has been out of print for quite some time, so it's exciting to hear the news that the new and improved Pax Renaissance 2nd Edition is coming to our tables in Q4 2020. Here's a very high-level overview from the publisher:
Quote:
As a Renaissance banker, you will finance kings or republics, sponsor voyages of discovery, join secret cabals, or unleash jihads and inquisitions. Your choices determine whether Europe is elevated into the bright modern era or remains festering in dark feudalism. 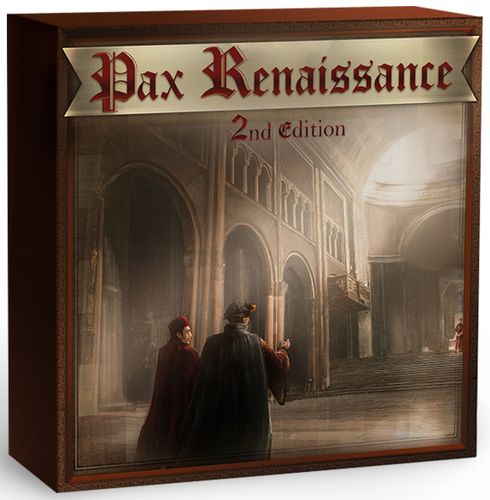 Prototype box cover
In Pax Renaissance, you have two actions each turn. As in other Pax games, you can acquire cards in a market, sell them out of the game, or play them into your tableau. You can also stimulate the economy by running trade fairs and trading voyages for Oriental goods. A map of Europe with trade routes from Portugal to Crimea is included, and discovering new trade routes can radically alter the importance and wealth of empires, ten of which are in the game.

Four victories determine the future course of Western Society: Will it be towards imperialism, trade globalization, religious totalitarianism, or enlightened art and science?

Pax Renaissance is considered by many to be the quintessential Pax game. On a personal note, it is the first Pax game I played, and it not only got me into Pax games, but also put me on a bit of a historical board game kick that hasn't slowed down.

The original Pax Ren packs so much game into such a tiny box; it's so deep, complex and opaque, yet thematic and somehow manages to pull it all off in a short playtime (60-120 minutes). It's definitely a commitment rules-wise and not a game you can casually break out with just anyone, but once you know it, it's truly a rewarding experience, especially when you play with others who understand it.

Based on the updates below, Pax Renaissance 2nd Edition should be considerably more accessible than the first edition with:

—Updated and expanded rules, components, and new Renaissance-inspired art.
—A game board that enables a third state for map cards and makes set-up time faster.
—A new solo mode.
—The previous expansion pack (59 market cards) and BGG promo (5 cards) included in the game.
—Major improvements to the iconography that allows cards to be splayed without changing the mechanisms.

Pax games might seem daunting at first sight, but with the new entry-level Pax Viking, you'll have a starting point to ease in. If you're up for something a bit heavier, pour that beer into your DeLorean and take a trip back to the Renaissance with the revamped and more accessible second edition of Pax Renaissance. You shouldn't need more than 1.21 gigawatts of power to get there...