wredespiele behind the scenes: Designer Diarys and more
Recommend

If you've read my designer diary, you've probably guessed that I've learned a lot about game design in the process. This is a list of the most important points.

1. Every idea has been there before
Alright, the new game is supposed to be unique, of course. But it’s not that easy: Every theme, every game mechanic, everything has been there before in one or the other way. The problem is: Every year, infinitely many new games become available on the market and it’s virtually impossible to know all of them - let alone play them. So, everytime a new game had some similarities with Thalara, I threw everything overboard. This is not even necessary as long as there are enough unique elements. There are countless love songs out there already, but still some of them enter the charts every year. This realization took me a lot of time - don't make the same mistake! Thalara is a really unique game, but similarities can be found everywhere. Thalara is like Smash Up, but with almost no luck involved. Thalara is like Magic: The Gathering, but much easier. Thalara is like Dominion, but without deckbuilding (how is that even possible?) 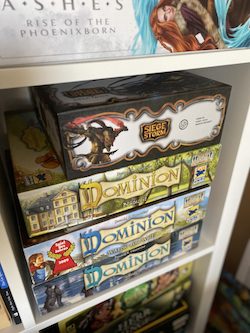 Siege Storm or Dominion: Some similarities with other games aren't really a problem

2. Restrictions drive creativity...
If I get stuck, this technique helps me: How would I solve the problem if I only had certain components available? For example: No game board? No game pieces? Only a certain number of cards? What would happen if the instructions had to fit on one page? So you are forced to find new ways and question the old. What is the essence of a deckbuilding game and does it work even if you have the whole deck in your hand? With Thalara I took these limitations to the extreme: I threw out almost all the components over time to distill the essence. There are other great examples out there: Think about the the minimal components of Love Letter or Dragon Punch, for example.

3. ...and restrict you
This is quite obvious: self-imposed restrictions not only boost creativity, they also make finding solutions enormously more difficult. Therefore, it makes sense not to hold on to every restriction compulsively. Of course, it's great when a game works completely without resources and yet achieves the same desired effect. But when the game gets better by adding resources: Go for it! The restriction must not degenerate into an end in itself. In the end we want to play a great game, no matter what it takes. With Thalara I had decided to use a maximum of 36 cards. This had a very practical reason besides the creative effect: I wanted to keep the production costs low. This is an important point, especially for a small edition. And yes, I had a wonderful solution that works with 36 cards. But: In the end the game just got even better with more cards.

4. Perfection gets in the way
A game that is never finished is of no use to anyone. And the secret is: There is always something that can be improved. I don't know if my perfectionism is just an extreme case or if everyone feels the same way, but no matter how satisfied I am with my ideas today, tomorrow I'll think of what I could do even better. And then nothing fits together anymore and I start all over again. With Thalara, I had to learn at some point that small improvements are perfectly okay, but you can't always start from scratch. It helps not to lose sight of the goal and to save a great new idea for the next game. Also, it helps me to write down all these ideas. They are not lost! 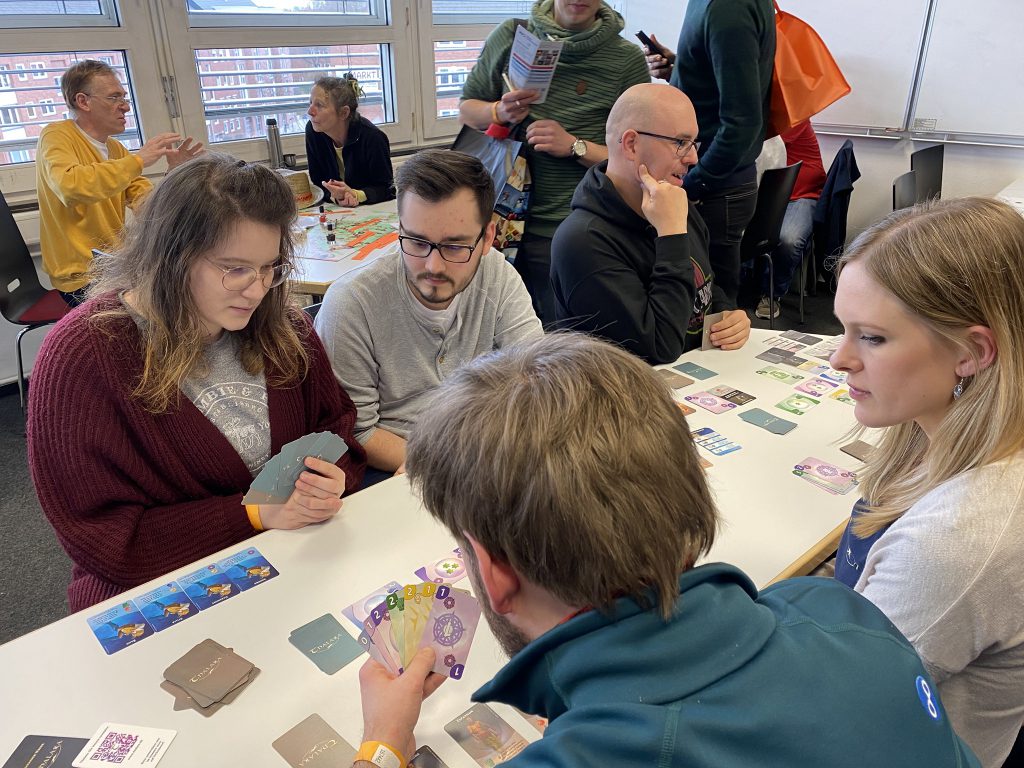 Playing Thalara at Bremer Spiele-Tage 2020. Letting others play your game is just SO important. This is how you make the most of the test results:

5. Testplayers provide problems, not solutions
Some test players know quite well what they find annoying about a game. Maybe the game takes too long, maybe it's too complicated, maybe it's unfair. And I'm sure they have lots of ideas about how to solve the problems. Most of the time these are the most obvious solutions: If a game takes too long, then fewer cards need to be drawn. But the simple solutions are rarely the best. It's better to listen to the criticism of the test players first, and then think about where the core of the problem lies. Maybe the game takes too long because the decisions are not intuitive? Are there really too many rounds or do the individual moves take too long? And when you have a solution, test it on your own before you let it loose on the testers again. With Thalara, I often made the mistake of thinking aloud in response to justified criticism and discussing my solution approaches. But when testers have just gotten used to a certain rule of the game, it is sometimes difficult to mentally break away from it. Then it can be useful to continue with a different, unbiased test group. Oh, yes, and of course we authors make the same mistake when we love a game element. Which brings us straight to the next point:

6. Streamlining is important
This one rule that made the game so special in the beginning, it can't disappear under any circumstances. In Thalara there was a "color joker" for a very long time. It had a very low strength, but could be used as any color. The color joker was awesome: it opened up a new strategic option, made the game less unpredictable, and the test players loved it. It took a really long time and a lot of effort to remove the card from the game. And indeed, the game had changed so much since the invention of the color joker that it was no longer necessary. And if one element of the game does not make the game much better, then there is a cost-benefit analysis: How much does the element complicate the game and how much better does it make the game? The color joker extended the rules of the game by a whole paragraph, while the fun remained almost the same. Even worse, the color joker frequently led to questions and ambiguities regarding a number of spells. For example, does it always count as all colors at once, even if I don't need them right now? Elements like that are not lost: In a well designed expansion the mechanism could find a place again, but in the basic game it doesn't have a place.

7. Balancing is never objective
It took me a while to figure this out: How can balancing not be objective? If one character is better than another, if one skill or card is better than another, then it's a balancing problem. And if two game elements are exactly the same strength, then the balancing is objectively good, right? It is not that simple. At game fairs, where the testers often only play one or two rounds, Thalara's balancing has been criticized time and time again. So it doesn't help much if I can assure the testers that you‘re reliably winning with every character against every other character as long as you’re the better player. What counts is the perceived balancing. And the challenge is to give beginners and professionals alike the feeling that the game and its parts are well balanced. Of course, that's not always possible, some subtleties can't be fully understood in the first rounds. Then it is important that beginners at least keep going long enough to develop a feeling for the tricks. And that brings us to the final point: 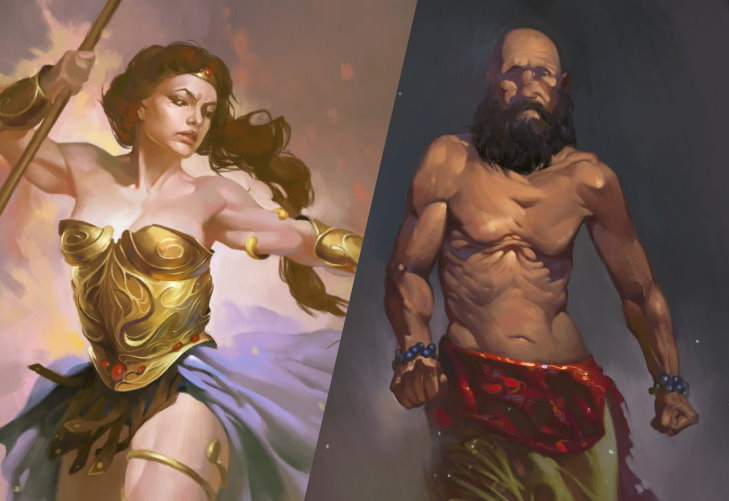 Myrja vs Kandhran: If both players know how to play, no character should be better than the other. On your first play it might still feel a little unfair.

8. A focus on fun
We all have different expectations of a game. Some want a strategic challenge that slowly builds up over hours of conflict. Some want a short, unpredictable chaos. A fun game with nice people, where you can have a good time. In this respect there is of course no general advice at this point. But one thing I learned during the development of Thalara: If it's no fun, it's not worth anything in the end. How much fun we have while playing depends on a lot of factors, which are weighted differently for everyone: Interesting decisions, experiencing self-efficacy, tension or surprising aha-moments. An important factor is often the learning curve. That doesn't mean that the game has to be easy, nor does it mean that there must be endless room for tactical improvement. But the game must be fun at every point of the process: The very first game just like round 1000. "Easy to learn, hard to master", it's often called. I prefer to put it this way: Fun to learn, fun to master. The game should also be fun before I have memorized the texts of 200 different cards. And it should still be fun even if I know the game inside out. With Thalara I tried to achieve just that. I hope I succeeded, at least for some of you.

Read more about the Thalara design process here:
Evolution of a board game: Don’t aim for perfection