Australian publisher Grail Games has had a steady partnership with designer Reiner Knizia for years, starting with a new version of Circus Flohcati in 2015 followed by a new version of Medici in 2016.

Artist Vincent Dutrait was responsible for the look of that second title, and at this point the Knizia/Dutrait/Grail team has also worked on King's Road, Medici: The Card Game, Yellow & Yangtze, and the still-to-be-released Medici: The Dice Game.

Now they're coming together again for two new titles, the larger of which is the 2-6 player game Whale Riders, which bears a 30-45 minute playing time and this description:
Quote:
You are a whale rider. For generations, your people have known and lived with the ice whales and together you've bought and traded at the busy ports along the fabled Ice Coast. You are honored to be the latest in your family to sail with the whales — but the ice is thickening and the glaciers are moving. A deep winter is coming, the fiercest for centuries. You decide to ride your mount one final time before the snows come to buy and sell as much as you can...and maybe even collect some precious pearls along the way.

Whale Riders is a new design with a classic feel, with players racing to the end of the Ice Coast and back, buying and selling as many resources as possible to make the money needed to acquire the richest prizes. Will you skip opportunities to gain the greatest treasure, or will you make your money slowly along the way? 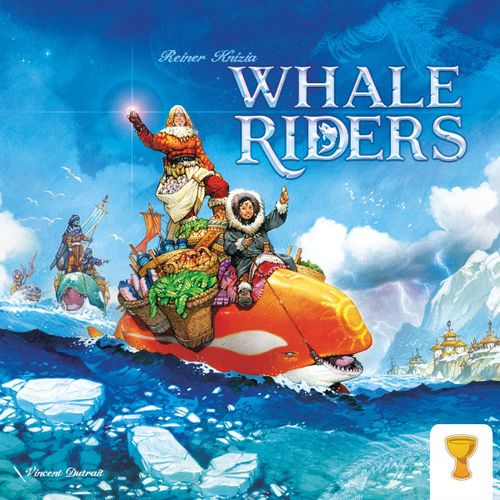 Each player has two actions per turn, but a lot they want to accomplish. Sail? Buy? Sell? Draw more order cards? All the while, your opponents might be sailing past and beating you to what's on offer down the coast! Once all the precious pearls have been purchased, the game ends and the player with the most pearls wins!
Grail Games plans to Kickstart Whale Riders in July 2020, along with a standalone companion game from the same team. In Whale Riders: The Card Game, which is for 2-5 players, you ride alongside others to buy goods along the Ice Coast, sometimes working together with others only to become competitors again when a better proposition comes along. 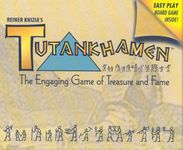 • In other Knizia news, U.S. publisher 25th Century Games plans to release a new edition of Tutankhamen — first released in 1993 by AMIGO, then republished in 2004 by Out of the Box Publishing — under the slightly different name Tutankhamun. The game will accommodate 2-6 players, and here's an overview of the setting and gameplay:
Quote:
The Great King Tutankhamun has passed, and arrangements are being made to fill his tomb with artifacts that will travel with him to the afterlife.

You are one of the priests and priestesses gathering artifacts for King Tut's tomb from all over Egypt. Once all the parts of each artifact have been located, that artifact is placed in the tomb, and the priests who took the most credit for acquiring it donate the funds needed for its procurement. Along the way, enchanted idols from the Gods may assist you in your journey. By acquiring artifacts, you rid yourself of your own wealth in order to pay the highest tribute to the late King Tut. If you can be the first player to completely disperse your wealth, you will so impress the new Pharaoh that he'll appoint you to the highest priestly office.

Prepare your offerings and invoke the aid of the mighty Egyptian Gods while you wind your way down the Nile toward the tomb of the great King Tut. Will you earn the favor of the new Pharaoh and be declared the next High Priest of Egypt? 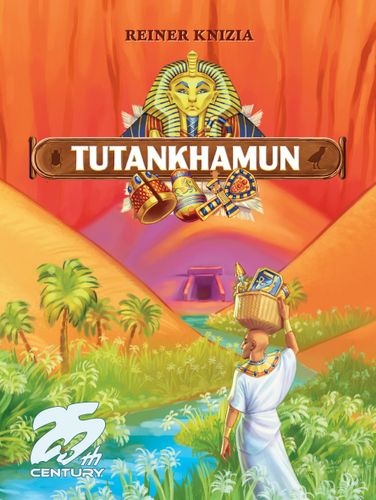 To set up, shuffle the artifact and god idol tiles, then arrange them in a snake-like pattern that emulates the winding of the river Nile. Players start at one end of the line, taking turns choosing any tile from in front of them along the Nile while never being able to claim a tile they have already passed. Multiple sets of scoring tiles (three sets each of 8, 6, 4, and 2 points), along with ten 1-point scarab ring tiles, can be claimed, and when the last tile of any set has been claimed, the player holding the most tiles from that set scores the number of points listed, while the player holding the secondmost tiles scores half that amount. Whoever has the most scarab tiles when the last one is collected scores 5 bonus points.

Tutankhamun includes two copies each of five different Egyptian god idol tiles. When you collect one of these, you immediately trigger its ability to manipulate tiles on the path, tiles in player's collections, tiles in the Underworld (i.e., the collection of bypassed tiles), or scarab ring tiles in your collection.

When a player reaches zero on the score track at the end of their turn, the game ends and that player will be proclaimed the new High Priest of Egypt! 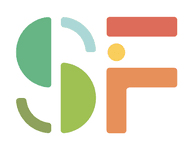 • When Knizia tweeted about the release of his game Phantom Seas in May 2020, I was surprised to discover not a design of his unfamiliar to me (since few people can keep up with all that he releases), but rather that the publisher of the game — SimplyFun — still existed.

For those not familiar with the company, SimplyFun started publishing educational games in the late 2000s, with its distribution of these titles being handled by sales agents who would host Tupperware-style parties during which they would show guests the games and take orders for them. I wrote about several SimplyFun releases in the late 2000s on Boardgame News, the site I ran prior to joining BoardGameGeek, but then I lost contact with the company and forgot about it — which is perhaps to be expected given that I never saw their games in stores or at conventions, much less at private home parties.

In any case, in April 2020 SimplyFun released the 2-4 player game Phantom Seas, which plays like this:
Quote:
In Phantom Seas, you want to claim as much treasure as possible without having it stripped away from you by the phantom ship that patrols the waters.

To set up, place the 22 treasure tiles face down at random on the designated spaces on the game board. These tiles are worth 1-3 points as indicated by the number of locks on them. Place the included compass on the game board, and orient the board so that the compass points north. Place your ship on one of the starting locations and the phantom ship in the center of the 13x13 game board. 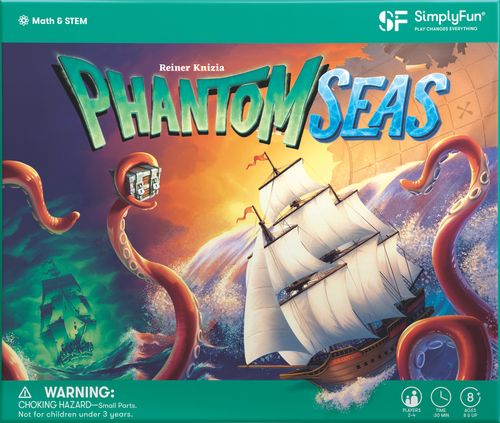 At the start of each round, reveal seven direction cards from the top of the deck. Players then take turns choosing a card and moving their ship in the indicated direction and distance, with most cards giving you choices for one or both of these values. If you finish your movement on a treasure tile, flip it over to see whether the phantom ship moves; if it does, the phantom ship moves directly toward you, and if it reaches you before ending its movement, then you throw that treasure away instead of keeping it.

Some tiles have you rotate the game board (and the compass), which means that the direction cards will now have you moving in different ways.

After all the cards have been played, reveal seven new cards from the deck. After seven rounds or after all treasures have been claimed, players count their scores to see who wins. 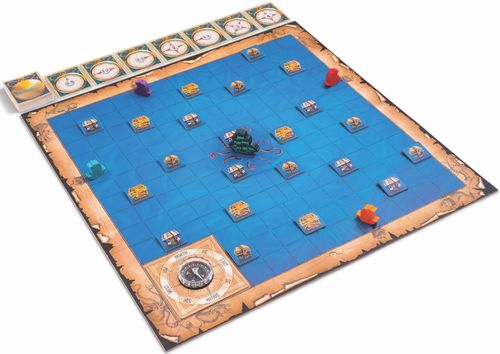