• In February 2020, U.S. publisher The Op announced Scooby-Doo: Escape from the Haunted Mansion from Jay Cormier and Sen-Foong Lim that was labelled as the company's first "Coded Chronicles" game.

The second such title has now been revealed: The Shining: Escape from the Overlook Hotel is by the same designers, and it's for one or more players, ages 17 and up, with a playing time of at least two hours and a release date of Q4 2020. Here's an overview of what you're doing in the game:
Quote:
The Shining: Escape from the Overlook Hotel puts one or more players in the roles of unhinged writer Jack Torrance's wife and son, Wendy and Danny, who must work together and find a way out of the mysterious resort!

Driven by the "Coded Chronicles" mechanism, which requires you to unlock clues and solve puzzles for unique storytelling codes, the game allows you to use psychic abilities like "the shining" to get through more than two challenging hours of escaping the threat of homicidal Jack and the paranormal hotel itself! Since every Coded Chronicles game is enriched with thematic details and objectives, escaping captivity makes this edition's difficulty level as hard as a dizzying hedge maze (minus the time limit)! 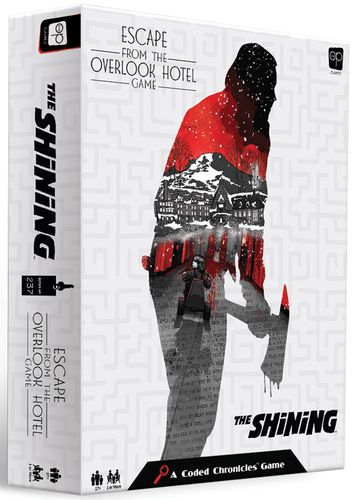 Players can anticipate being engaged with every unpredictable turn, thanks to Wendy and Danny's heightened abilities, which allow their characters to investigate with double the intuition as characters from the previous Coded Chronicles game, Scooby-Doo: Escape from the Haunted Mansion. Use Wendy's skill of looking and using surrounding objects to get a better hold of helpful items or tap Danny's supernatural "Shining" to reveal hidden clues.
The year 2020 is the fortieth anniversary of the film The Shining, so perhaps we shouldn't be surprised to find a second game being released this year to mark the occasion, with Prospero Hall and Mixlore's The Shining having been released in March 2020. 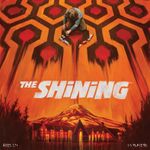 • Or maybe given the current growth of the board game market, we just have to anticipate that many licensed properties will have associated games released by multiple publishers. In March 2020, for example, I wrote about Back to the Future: Dice Through Time and Back to the Future: Back in Time, with each being a co-operative dice-based game due out in mid-2020, the former from Ravensburger and the latter from Funko Games.

And just as The Op is following Mixlore onto the market with its own game about The Shining, CMON Limited is following The Op with its own take on Scooby-Doo, with Scooby-Doo: The Board Game — due out "soon" — being a co-operative design for 1-5 players from Guilherme Goulart and Fred Perret. Here's an overview of the game from CMON:
Quote:
Ruh-roh, Shaggy! There's a monster on the loose, and it's scaring everyone out of town! It's up to the Mystery Inc. gang to stop them! Scooby-Doo: The Board Game is a co-operative family game for 1-5 players that brings the beloved cartoon series to life with amazing miniatures of the whole gang.

Players take on the role of Scooby-Doo, Fred, Velma, Daphne or Shaggy, and ride the Mystery Machine around town, building traps to catch the villains before they frighten all the citizens away — but just like in our favorite episodes, even the best plans can go awry as the monster, which is controlled by the game itself, may make a move the players never expected! 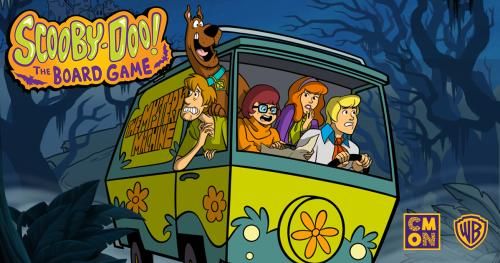 Each member of Mystery, Inc. has their own unique, special ability to help them during the game, and they'll need all the help they can get because the villains all operate differently as well! The gang can succeed only if they coordinate together as a group.

Scooby-Doo: The Board Game has three levels of difficulty (easy/medium/hard) and special rules for playing as a two-player game or a solo game.