Now one week ahead of the delayed release of that second game, which was originally due out in May 2020, Osprey has announced an expansion for both games — Undaunted: Reinforcements, with this title due out in August 2021. Yes, that's more than a year away, but you haven't even touched North Africa at this point, so ideally you'll have plenty of time to prepare for this modular expansion. Here's what's coming:
Quote:
In North Africa, the Long Range Desert Group is a thorn in the sides of the Italian forces, disrupting vital lines of communication and striking at strategic targets ranging far and wide. In Normandy, U.S. forces brace against German counterattack, determined to maintain their foothold in the region. The fighting is intense, and the outcome hangs on a knife's edge. With everything at stake, you desperately need reinforcements! 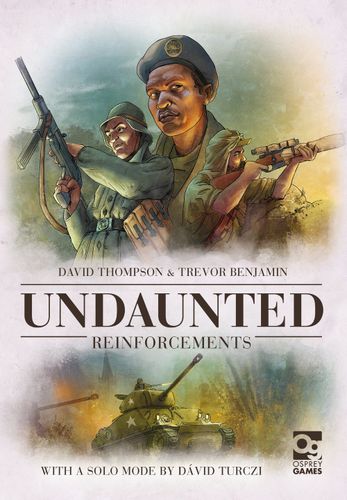 Undaunted: Reinforcements introduces a range of new rules, scenarios, and units. Unleash the might of the German and American tanks and see how your new squad options fare against them in Undaunted: Normandy, or make use of mines, assault aircraft, and other new units as you attempt to outfox your opponent in Undaunted: North Africa. Whether you have one Undaunted game or the other, with Reinforcements you can play for the first time in a four-player mode, or test your mettle in a solo mode by Dávid Turczi.

• As part of its fortieth anniversary celebration, German publisher AMIGO is releasing special editions of various titles in its catalog, with the newest such announced title being L.A.M.A. Party Edition, a new version of Reiner Knizia's 2019 Spiel des Jahres-nominated card game L.A.M.A.

This version of the game includes a single pink llama card that can be played on top of any card, but which is worth -20 points in hand at the end of a round; number cards with pluses, e.g., 4+, that allow you to take another turn immediately when played; and pink tokens worth 20 points, which means your luck can turn around quickly if you win a round and ditch one of those! For details on how to play L.A.M.A., check out my wildly enthusiastic overview video.

• Cryptozoic Entertainment had announced Steven Universe: Beach-A-Palooza Card Battling Game from Erica Bouyouris and Andrew Wolf as a Q1 2020 release, but plans changed for what is likely to be any number of COVID-19-related reasons, and instead the game will now be Kickstarted starting on July 14, 2020, with the game being advertised as a "Kickstarter exclusive".

• German publisher Pegasus Spiele has picked up the Paolo Vallerga and Marco Valtriani design Armata Strigoi — which debuted at SPIEL '19 from Italian publisher Scribabs — for release worldwide, with the second edition of the game hitting the market in September 2020.

Armata Strigoi is inspired by and set in the world of German power metal band POWERWOLF, which co-designer Valtriani explained in detail in a BGG News designer diary in October 2019. For an overview of the setting and gameplay, you can watch this overview video recorded at SPIEL '19 or read the following:
Quote:
The eternal struggle between vampires and werewolves is coming to an end. The last Vampire Master and his Apprentice, Strigoi from Wallachia, are dwelling in the ancient fortress of Tismana: a stronghold haunted by evil undead creatures. Nevertheless, the POWERWOLF — sons of the Legends of the Night and the Armenia Savage Army — the defenders of the "Real Truth", prepare for a last frantic assault knowing there are no alternatives to victory!

Armata Strigoi is a game in which the Powerwolf win or lose as a team, but each player makes their own decisions about their actions and movements. Each player represents one of the Powerwolf heroes which assault the Strigoi's fortress as a single pack. In order to win they have to defeat both Vampires. However, the two foes are initially invulnerable and their vitality is intrinsically linked to their dwelling fortress, thus, upon the demise of the first vampire the whole structure will start to crumble and collapse on itself, making the victory a race against time! 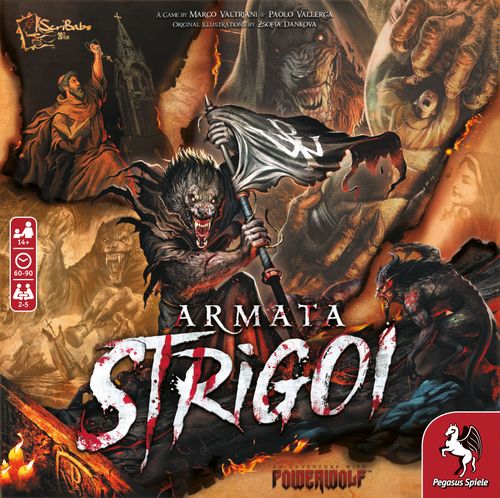 The Powerwolf act collectively, but a pack of werewolves during a furious assault is not known to be a highly organized band that can devise and set up high-profile strategies and tactics. Hence, the players are forbidden from sharing details about their cards, though they can talk to each other, propose joint actions, or heal a comrade.

Victory is achieved by defeating both Strigoi. To make them vulnerable, the Powerwolf must first collect Blood Points by decimating the fellow Creatures of the Night who haunt the fortress. During their quest, they can also collect weapons and magical artifacts.

If one Strigoi perishes, the other immediately turns into a Supreme Master Vampire, making them even more lethal. At the same time, the fortress starts to crumble and collapse room by room. If both Strigoi are defeated, the Powerwolf pack wins the game. It is not an easy task, but let the hunt begin!