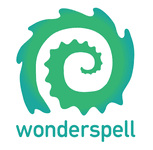 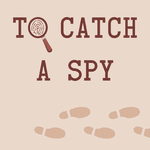 • Wonderspell is a new publisher founded by designers Jason Greeno and Jason Tagmire that plans to release 54-card games (submission form here), and its initial release will be Harsh Shadows, a one-player game by Rachel Bruner that she originally submitted to the 2020 54-Card Game Design Contest on BGG under the name To Catch a Spy, which is a 1-2 player game.

You can explore the evolution of the game in this WIP thread by Bruner, or read this summary of how the game currently works:
Quote:
As a secret agent, you've been assigned to catch an elusive spy before they get away. Search for clues and find evidence while you track the spy, but watch out for dangerous explosives! 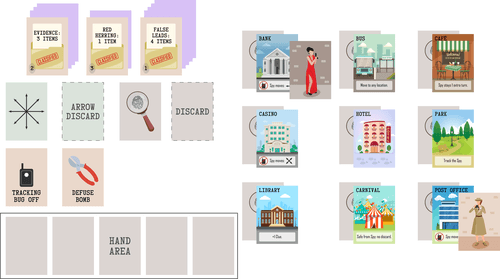 Set-up with Bruner's placeholder art
In the solo game, you are the agent and go first, moving to an adjacent location and revealing a discovery card, which could be an item, clue, or bomb; item and clue cards go in hand, while bombs force you to discard. You can use a location's special ability and clues to reveal case cards under files. You might be able to place a tracking bug on the spy.

For the spy's turn, the arrow cards move the spy to an adjacent location, where a new discovery card is placed at random. If the spy moves to your location, discard a card. If you can't discard a card or discover you've discarded an item matching a case card, you lose immediately.

When the discovery deck is empty, the spy attempts to escape. You must have placed a tracking bug on the spy, have the three item cards in hand matching the case cards, and make it to the spy's current location before the spy escapes.

Art from Harsh Shadows by Ben Flores
In the two-player game, which will likely be included only in To Catch a Spy, one player is the spy while the other is the agent. At the start of a round, each player chooses and reveals an arrow card, then the agent takes their turn, followed by the spy. Gameplay takes place as described above, with the spy needing to place all cards in the discovery deck before trying to escape, while the agent needs to collect the three items matching the case, bug the spy, then reach the spy's location.

• Aside from L.A.M.A. Party Edition, which I covered the other day, German publisher AMIGO has revealed information about a couple of October 2020 releases, with one of those being the newest title in Uwe Rosenberg's long-lived Bohnanza series of card games.

In the standalone game Excalibohn, which is for 3-5 players, gameplay is much like it is in Bohnanza, except that most types of bean now have a special "magic power" associated with them. Each player starts the game with one magic card and can earn more. After planting one or two cards at the start of your turn, you now have a magic phase during which you can use potions and other special powers.

• In 2019, AMIGO debuted Richard Garfield's Carnival of Monsters at Gen Con 2019 — and you can check out extensive written and video coverage here — and for 2020 AMIGO is expanding the world of that game with a standalone design from Alexander Pfister titled Monster Expedition. Here's a summary of gameplay in this 1-4 player game that plays in 30 minutes:
Quote:
As the newest members of the Royal Monstrological Society, players embark on an expedition to hunt for legendary monsters, which have been spotted in the cloudlands, in the deep sea, and in the haunted forest. With ideal dice combinations, players can improve their camps, catch new monsters, and use the abilities of previously captured monsters.

At the start of Monster Expedition, players each receive a set of three supply camps, and a wilderness display is formed from ten cards. Create a draw pile based on the number of players, then place this deck in the center of play, along with the game board and dice. 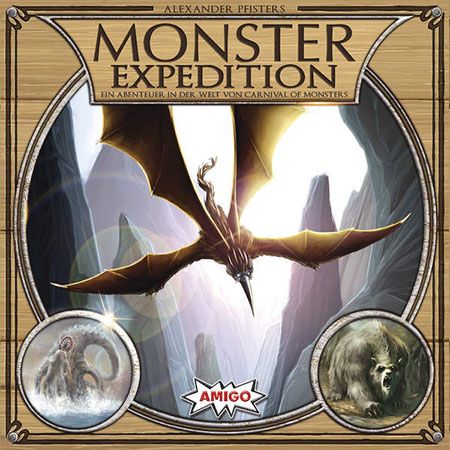 On your turn, you choose one of your three camps, then goes monster hunting, with your camp level determining which dice are available. At the start of the hunt, you roll all the dice, and after each roll, you set aside all dice of a chosen value that you haven't yet set aside. If you can't set any dice aside, the throw counts as a miss and you lose the best dice you laid out previously.

When you stop, use the set-aside dice to capture monsters from the wilderness and improve your supply camps, possibly calling on abilities from monsters already in your collection. When the draw pile is exhausted, complete the round so that all players have had the same number of turns, then tally the points to see who took the biggest haul.