First edition cover
U.S. publisher Rio Grande Games has announced the next title in its Winsome Games reprint line following the release of Gulf, Mobile & Ohio in April 2020 and the impending release of Trans-Siberian Railroad with this third title being Southern Rails from Winsome's own John Bohrer under the pseudonym "Harry Wu".

Southern Rails is a 3-5 player game that was first released by Winsome Games in 2015. Here's an overview of how it works:
Quote:
The game is played on a map of the southeast United States and is similar in style to many of the stock-based, cube-rail games released by Winsome Games since 2007. During set up, players spend two rounds selecting stocks from two of the six available companies, then the game begins. 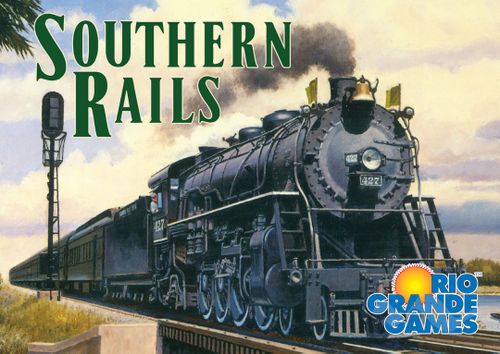 Each turn, a player must place a track cube for one of the companies in which they have stock. The first cube of a company can be placed on any hex, while each subsequent cube for that company must be placed adjacent to another of the same color. Hexes (other than Atlanta) can have 1-3 cubes placed on them, and when a cube is placed in a city — with cities coming in four colors — that railroad's revenue increases by $1-4 depending on the color of the city.

When the tenth cube of a company is placed, railroads earn points based on certain criteria — highest revenue, fewest shares owned, most cubes on the map, and most cities of a color in its network — with ties resulting in no points being awarded for a category. (If, for example, both the purple and black railroads have the most red cities in their networks, then no railroad scores the points for having the most red cities in its network.) Each player then scores points equal to the points scored by the railroads in which they have stock. 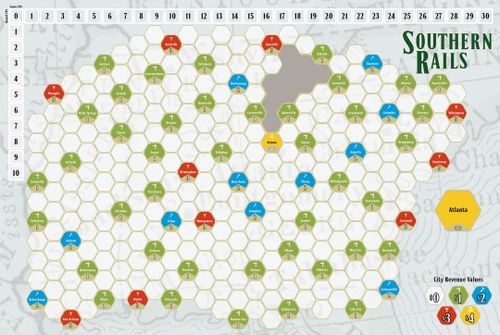 Player order is then reassigned, and players get to select an additional stock after which they again take turns placing cubes on the board. After the fourth scoring round, the game ends and whoever has the most points wins.
In April 2020, Rio Grande Games announced that Trans-Siberian Railroad — the second title in its Winsome Games series — would be a mid-2020 release. The game is nearly ready, but Rio Grande is reprinting the rules to correct an error, so those new rulebooks need to be inserted into the boxes prior to shipment.