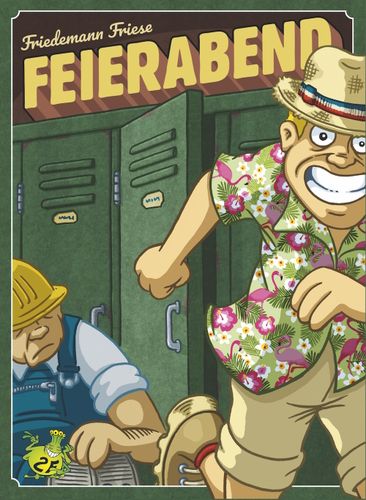 Every publisher is facing challenges in 2020 — well, everyone really, but let's stay focused on games here — and they're responding to them in different ways. Here's an excerpt from a press release from German publisher 2F-Spiele:
Quote:
Until early March, we had grand plans to release Feierabend (a.k.a. Finishing Time) at Berlin Con in July and Gen Con in August for the first time, and then life pulled the rug out from under us. Because of the lockdown as a result of the worldwide Covid-19-situation, basically all game conventions and game shows were cancelled for an indefinite period. This resulted in uncertainty for a lot of our international partners, while we needed to move ahead, trying a different approach to release the game.
As far as I know, 2F-Spiele consists solely of designer Friedemann Friese and editor Henning Kröpke, and if the company doesn't publish games, then they survive solely on continued sales of whichever games were released previously. Thus, they decided to find a different path to production: "We will release the game in a bilingual first print run limited to 2.400 copies, including German and English rule booklets. Hoping for a successful start, together with our international partners we will then release a second print run in early 2021 including several localized editions."

For many, 2020 has turned into a yearlong Groundhog Day, with each day feeling like the same grind over and over again. You're stuck inside, unable or unwilling to travel, and do the same things again and again, which sometimes — let's be honest — is what work feels like. Coincidentally, Finishing Time is all about escaping the grind of work to give yourself relaxation, both in the immediate sense of blowing off stress and in the longer term by improving working conditions for yourself. Here's an overview of this after-worker placement game for 1-6 players:
Quote:
In Finishing Time, you are playing a team of workers (female, male, and non-binary, too). Each day you leave work stressed and look for some fun in the evenings — but thanks to a 70-hour work week and a low income, you don't have many possibilities for relaxation. Sure, you can head to the pub for drinks, go on blind dates to find a partner, or fish or jog outside, but this is not a good work-life balance. It's a rat race.

If you really want to relax, you need a higher income for you and your fellow workers — and the women on your team should be paid the same as the men. You want to work fewer hours each week, and taking a vacation would be good, too. Let the union help you fix this depressing lifestyle. This change might stress your employer, of course, but they already earn enough to be able to de-stress their life. 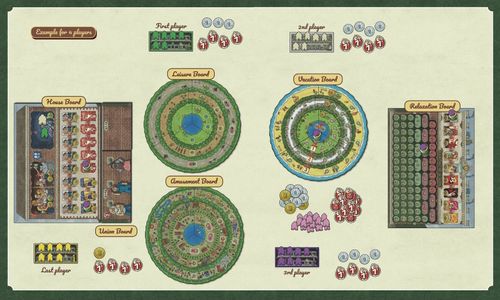 Set-up for a four-player game
Each turn, place one (or more) of your workers on any available after-work spaces to gain relaxation. Taking leisure time doesn't cost anything, but going to town for amusement requires you to spend hard-earned money. Going on vacation for real relaxation is out of the question until your employer is convinced to grant your workers some time off. When your workers meet partners, you gain access to even better relaxation options.

At the pub, workers can relax and have drinks in front of the bar — or they can earn additional income and suffer more stress by working a second job there. You'll want to visit the union office, too, to strike for better working conditions. If you have enough strike tokens, you can force your employer to reduce working hours, increase your income, close the gender gap, or even send you on vacation.

After all your workers have been placed and taken their after-work actions, they are forced to return to work. You place them all on your factory where they then suffer stress, earn income, and gain strike tokens from the union, depending on the current working conditions. 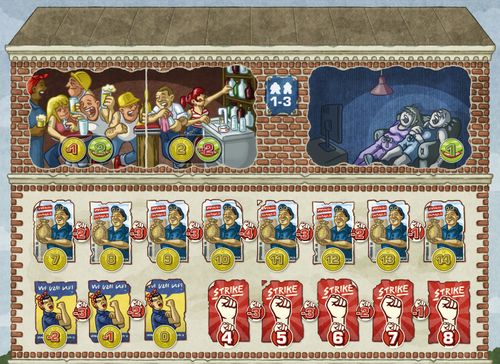 The house board: pub, home, working condition meters
The end of the game is triggered once a team gathers at least 40 relaxation. (In this game, relaxation is considered to be a currency.) Your workers are then placed on after-work spaces and go back to work one more time, after which the most relaxed team wins Feierabend.

Create a better (that is, more relaxing) life for your workers and their partners. Which team will relax the best and win the game? But really every team is a winner since they fought for better working conditions. Workers unite!
So how will 2F-Spiele make this game available now that Berlin Con and Gen Con won't take place as originally planned? Initially, to compensate for the cancelled game conventions 2F-Spiele plans to sell the game directly, in Europe through the online store 4x-Brettspielmarkt (starting August 3, 2020) and in North America through the BGG Store (in September 2020). These direct sales including a 2F-Spiele Digital-Convention expansion — one additional space for your workers to go during their time off. Copies will then be made available through retail stores in Europe starting on September 7, 2020, thanks to the Spiel-direkt distribution system with the expansion being available as a downloadable item. 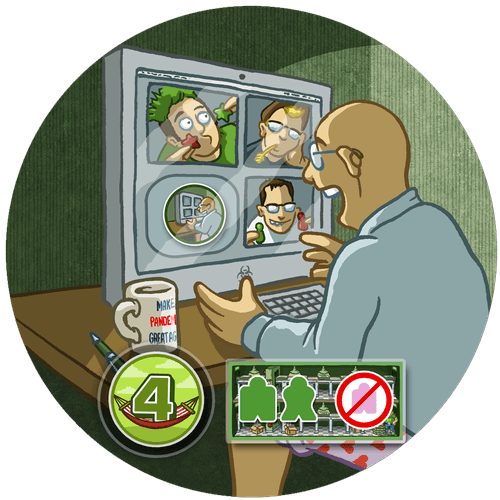 I'll note that I edited the English rules and solo rules for Finishing Time, not for direct compensation, but because the item will be sold via the BGG Store and I put on many hats as a BGG employee.

Friese is blogging regularly on BGG (Game Designer Lockdown), and he has promised that a designer diary for Finishing Time is forthcoming, but he's already posted a diary overview, more about the game's history, and a tiny bit about the solitaire game. Wrote Friese: "I worked a lot on having an automated solo variant, because of these times now. Every game seems to need to be soloable."

In the blog, Friese has also been writing about the 2F-Spiele title that was planned for release at SPIEL '20, a large 2-2.5-hour game titled Fayium. With SPIEL also going digital in 2020, perhaps 2F-Spiele will release Fayium in a similar manner, but the company has not released details for now.