Game Preview: Pandemic Legacy: Season 0, or Into the Red Zone 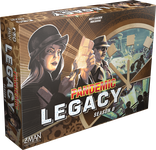 Following a teaser in early July 2020, Z-Man Games has announced the forthcoming release of Pandemic Legacy: Season 0 from Matt Leacock and Rob Daviau, the final title in the Pandemic Legacy trilogy, albeit one that takes place decades before the other two. Here's a quick overview of the game from the publisher:
Quote:
1962 — The Cold War continues as a new threat looms on the horizon, a deadly new Soviet bioweapon, something called "Project MEDUSA". You and your fellow medical graduates have been called up to the CIA for the critical mission of investigating and preventing its development. Travel the world using carefully constructed aliases to move swiftly between Allied, Neutral, and Soviet cities. Your missions will require you to eliminate Soviet operatives, acquire specific targets, and set up other CIA agents on location to execute your operations without a hitch. As you complete objectives over the course of twelve months, each success or failure will bring you closer to the truth.

Combatting this dangerous new pathogen is of utmost importance, but it's not the only threat you'll encounter in the field. Soviet agents are taking root in all parts of the world, and it's critical to your mission that you keep them contained before they can escalate international tensions. Luckily for you, you won't be without backup. Coordinate with other covert CIA operatives for assistance — they're particularly effective at making Soviet spies disappear...quietly. Make strategic use of CIA teams at different locations to clean up the board and keep your eye on your main objectives. 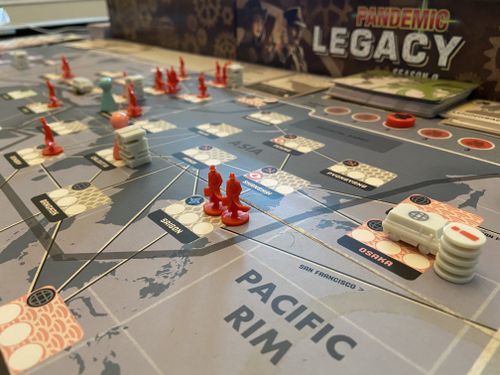 Midgame during the prologue game — no spoilers!
Designed as a prequel, Pandemic Legacy: Season 0 does not require you to have completed Season 1 and Season 2 before diving into this Cold War spy thriller. As in the first two Pandemic Legacy games, each time you play brings new cards, rules, and conditions that affect future games. Each alias you create will gain contacts and other assets to execute your plans more smoothly. And, of course, the CIA will be watching and evaluating your performance in the field. Work together with your fellow agents to prevent this new bio-threat — the fate of the world depends on it. Can you save humanity once again?
Something nice about Season 0 is that it contains a prologue game ahead of the year-long campaign that will last 12-24 games depending on how well you do. You can play the prologue game as many times as you like, and by doing so, you'll get a handle on what's taking place in 1962 and how you can take actions to confront and reveal the activities of the Soviet Union.

Another nifty element is that Soviet agents serve the role of diseases in this game, and when you would place a fourth agent in a location, instead of them spreading to adjacent locations, you pull the bottom location card from the deck, then carry out the "incident" described on it, with you possibly losing a safehouse, being shipped back to Washington, having agents show up in other places, or losing cover for your alias. 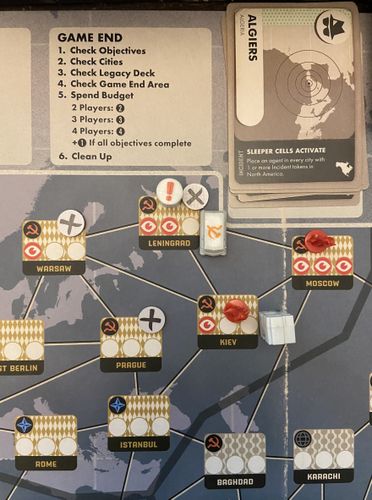 Lots going on in this pic, but with no spoilers!
I've played the preview game twice with two players on a review copy of the game from Z-Man, losing the first and winning the second. In the prologue, you must complete two objectives in order to succeed. (Having one failed objective still lets you advance in the campaign with a rating of "adequate", with you increasing funding along the way; failing two or more objectives is the only way to truly fail.)

One of those objectives requires you to have a Soviet team (which is under your control) in Novosibirsk at some point during the game to hunt for a missing agent, while the other is a deduction game of sorts. You know that a sample of "Project MEDUSA" is somewhere in Europe, but not which specific location. You can spend Europe cards to discover that location or you can see which locations are revealed in the player deck and therefore cannot be the hidden location, then hope for the best by assigning teams of the appropriate affiliation to whichever locations you haven't eliminated as a possibility.

In the video below, I cover the prologue game in more depth, while not revealing any spoilers about the campaign itself. I mean, I show sealed components from the campaign, but what's inside those packages while remain a mystery to both me and you for now: