After weeks of teasing, German publisher Queen Games has unveiled the first two titles in its "Stefan Feld City Collection", a collection that "will be a multi-year project comprised of 8+ games", according to Queen — "8+" presumably because Feld and Queen have planned out that far, but who knows what he'll create down the road.

Here's an excerpt from the press release announcing this series, which will contain "re-implementations of beloved titles previously released, as well as newly-designed titles specifically for the collection":
Quote:
Each previously released title is being meticulously re-examined, tweaked, and improved with new gameplay elements, and will include existing expansion material as possible. In addition, these games are being moved to a new setting, which has been carefully chosen and gameplay elements altered to match the setting. Cities will be featured from all over the world, and we consider it important to represent these beloved cities well, showcasing their unique beauty and features. Each game will feature unique artwork from an assortment of well-known artists, but with a similar style to tie them together, including a painstakingly created cityscape panorama that will run across the sides of the boxes.

The first title in the series is Hamburg, with this game being not a reimplementation of Die Speicherstadt, which actually is in Hamburg, but a reimplementation of the 2013 release Bruges, along with the expansions The City on the Zwin and Pets, the latter of which I didn't even know existed until this point. No wonder I felt a tiny furless hole in my heart whenever I played Bruges...

In any case, here's an overview of Hamburg:
Quote:
Hamburg is a card game in which each card has five different uses, and players must cleverly choose the best use for each one, all while avoiding disasters and racing for different objectives.

In the game, players act as mayors of the city of Hamburg in the late 19th century. The game is played over eight rounds. At the beginning of the round, six colored dice are rolled, with players receiving a threat marker in the color of any die that rolls a 5 or 6. The black die is a "wild" threat, with players drawing a threat token with one of the other threat types hidden on the back. If a player ever has three of one type of threat, they receive a penalty.

Next, players have the opportunity to pay a number of coins (equal to the pips on all dice
showing a 1 or 2) to advance on the mayor's track. The black die also activates the clergy in St.
Michael's Church, which serves as a round counter and awards points for certain building types at the end of the game. 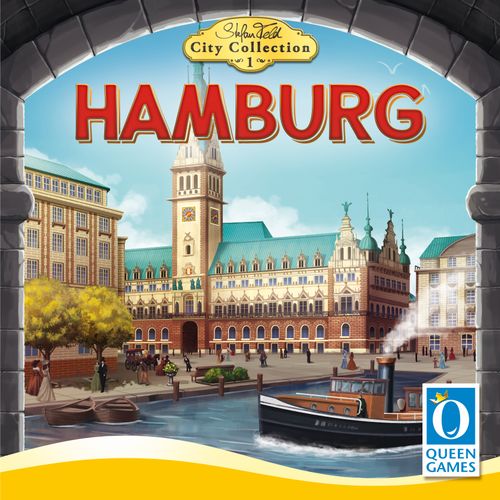 On their turn, players play five cards from any of five stacks of cards, one for each of the five colors in the game. These cards are in thirteen categories, each representing a different location around Hamburg, with seventeen individual cards within each category. Each card in a player's hand may be used for a number of purposes, including building the city wall, activating boats (if a 3 or 4 is rolled), starting a building plot, and constructing a building (card) on the plot, with this building granting a new ability or endgame scoring condition.

Players receive points for various accomplishments during the game. In addition, they may receive bonus points by being the only player to have achieved one of five conditions for that round. Whoever scores the most points after eight rounds wins.

The second title announced from Queen is Amsterdam, which is a reimplementation of 2009's Macao "with a new setting, improved card balance, and new gameplay elements".

Here's an overview of gameplay for those not familiar with the original game:
Quote:
Amsterdam challenges players to build combinations of abilities, as well as to correctly calculate the advantage of delayed gratification for actions.

In the game, players are merchants in Amsterdam near the turn of the 20th century. At the start of the game, two district cards are placed on each of the twelve spaces on the designated board. At the beginning of a round, the next two district cards, as well as two building and two profession cards (each from a deck of 54 of each type) are drawn to form the offer of six cards. Each of these cards has a cost in colored action cubes and grants a new action, special ability, or way to score points. In turn order, each player takes a card from those on offer. Finally, a market card is revealed that allows players to exchange money for victory points on their turn. 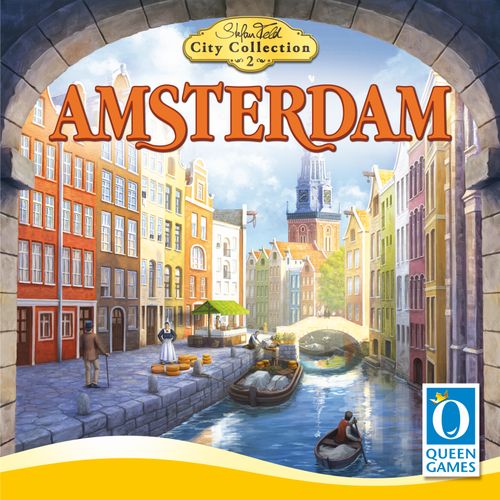 Next, the six colored dice are rolled. Each player decides which of the six dice they would like (players may choose the same die), then takes as many action cubes in that color as the number of pips. Players place their new action cubes on their rotatable windrose as many spaces in the future as the number on the dice. Finally, the wheel is spun, so that players gain access to all cubes that were located on the 1 space of their windrose.

Action cubes are used to purchase cards that a player has taken, claim one of the nine types of goods around the city of Amsterdam, and ferry goods or workers through canals to warehouses. Players earn points for delivering their goods, as well as for bonuses on cards they purchase, and the player with the most points at the end of the twelfth round wins.
Queen Games plans to launch a Kickstarter project for these titles on August 18, 2020, with shipping to occur to backers in Q1 2021. Future titles in the "Stefan Feld City Collection" will be launched on Kickstarter in pairs, with the next two titles being New York City (an apparent reimplementation of a previously released title) and Marrakesh, a new design. 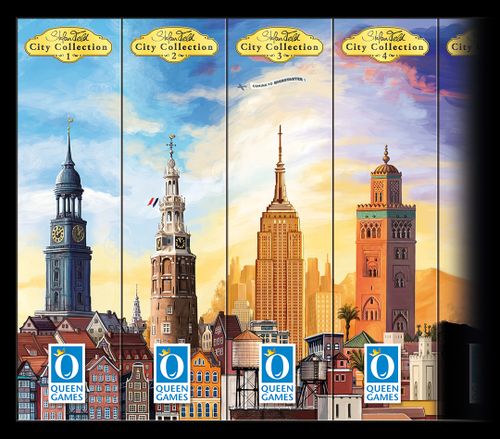