Card drafting + <<insert any game mechanism>> is typically a winner in my book. I love that mental struggle of wanting or needing to keep a card to help myself, and at the same time wanting or needing to hold onto a different card because I don't want to pass it to my opponents. It doesn't matter whether card drafting is a main feature of the game, as in Bunny Kingdom, Among the Stars or 7 Wonders, or a less prominent feature or variant in games like Capital Lux or Terraforming Mars.

Drafting cards in a game tends to create more strategic choices, mitigating some of the randomness of drawing cards, and makes games more interesting in my opinion. As you might expect, my ears always perk up when I hear of new games with card drafting, so I figured I'd share three upcoming fantasy-themed, card-drafting-ish releases that I'm looking forward to hearing more about.

• Grey Fox Games will launch a Kickstarter campaign in August 2020 for Tim Armstrong's Arcana Rising, a card-drafting, engine builder for 2-6 sorcerers that plays in 20-60 minutes. In more detail from the publisher:
Quote:
Arcana Rising invites up to six spellcasters to participate in a competition to acquire arcane artifacts and cast mighty spells in an effort to gain knowledge and power. As they gather their mystical relics, they note the passing of the moons which amplify the power of certain schools of magic allowing wizards to cast spells at the peak of their power! 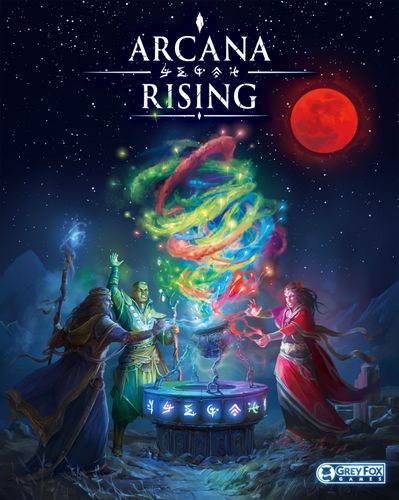 Arcana Rising is a drafting and engine-building game in which players compete over three rounds to craft a magical engine that will power their collected artifacts and generate points for them at the end of the game.

On a turn, players select a single card from the pile they are passed. Once a card has been selected, players pass the remaining cards clockwise, then choose whether to add the newly acquired card to their tableau or discard the card in order to run their engine and cast their spells. Randomized moon tokens tell players which of their spells may be cast. Therefore the timing of executing your powers is nearly as important as the powers themselves.

The cards fall into schools of Charms, Herbology, Blood Arts, Potions, Alchemy, and Artifacts. Only a single type of spell can be cast each turn, depending on a randomized order for that round.

After three rounds of drafting, players calculate their scores based on the unique set of artifacts they have collected and the player with the most victory points wins!
After checking out a demo of Arcana Rising during the BGG livestream for Comic-Con@Home, I suspect this will be an instant hit for fans of Res Arcana and It's a Wonderful World — but you don't have to take my word for it as Arcana Rising is currently available on Tabletop Simulator, so you can play it and decide whether it's something for you. 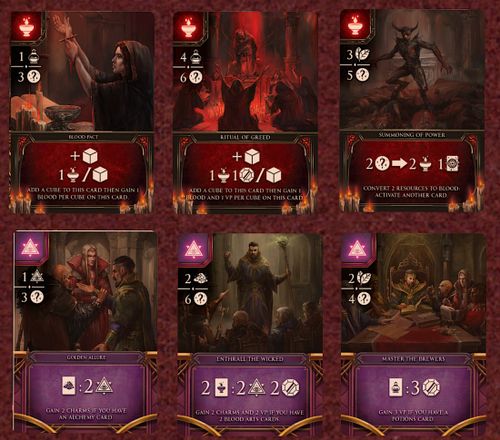 Spell cards from Tabletop Simulator
The box cover and card art by Yaroslav Radetskyi is beautiful, and the style might be familiar if you've played Reavers of Midgard as that game also features Radetskyi's artwork. In Arcana Rising, each of the three rounds uses its own deck of spell cards, and I dig the way the images progress from round to round for common spells. It's a nice touch and helps make the theme pop.

Riftforce intends to fill the gameplay gap between conventional duel games and LCGs, without the expensive buy-in and need to learn a tons of different abilities. Here's the backstory and a brief overview of what you can expect from this 20-30 minute, hand management, deck construction battle for two:
Quote:
The Rifts changed our world. Villages were torn apart, then Riftforce emerged from it and spread across the land. What seemed lifeless before started to rise and wake. Flames left campfires, and waves poured out of their riverbeds. Even the sun and moon leave their footprints in the ground.

We learned how to control those living elementals and formed guilds to perfect this knowledge. While competing for Riftforce the guilds forged temporary alliances to share their unique abilities and guard the access to the Rifts.

Now it is your time! Choose your guilds, combine their powers and rush into battle. Gain Riftforce from the land you control and all the elementals you destroy until you have enough to ascend into a higher state of power. 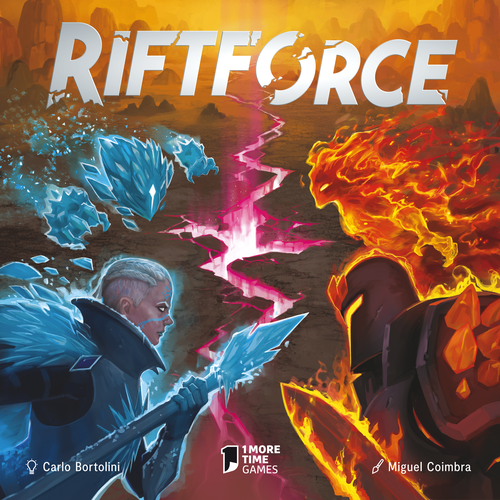 In Riftforce, each player starts by drafting four of the ten different guilds, each with a unique power, to forge their own asymmetrical alliance. Every game of Riftforce gives you a chance to discover new synergies between guilds, which will greatly influence your overall strategy and strengths. Can you combine the flexible and mobile water guild with the all-consuming fire elementals who even harm their allies and unleash their full potential?

The guilds' elementals are the lifeblood of the game; they are your troops and at the same time the resource necessary to attack. Soon you will find yourself wondering how to use them best. Each turn you are torn, choosing one of three possible actions. Do you want to strengthen your position at the Rift, sacrifice elementals for powerful combo attacks or gather support for your next turn?

Gain Riftforce by destroying the elements of your opponent and by controlling locations along the Rift. Only then will you ascend and win the game.

Discovering new synergies between the different guilds, clever gameplay combos and the deeper layers of strategy will keep you coming back to enjoy the game again and again. 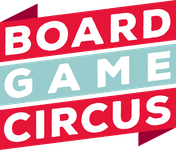 Here's an overview from the publisher:
Quote:
A certain something filled the air. While energizing the magic crystal in his wand, Orly suddenly felt a change he couldn't name. Usually this ritual took only seconds before the crystal power kicked in. Not today...it took him minutes to obtain the desired power required to load his wand for the adventurous travel ahead of him.

While waiting for the blessing of the crystal power, he noticed something dark. Something was lurking in the mist absorbing the essential and much needed crystal power from the crystal fragments orbiting around their world, Amanaar. In light of the immense threat to their habitat, Orly decided to set off on a journey, visiting some of the remarkable creatures of Amanaar in order to seek out the dark power that threatens their very lives. Never in his humble existence would he have imagined that some of his friends would turn against him in a battle for the Lost Lights of Amanaar... 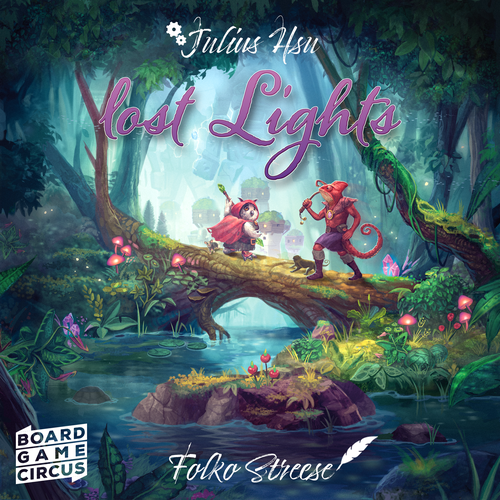 Non-final box cover
In Lost Lights, two players battle with their party of diverse animalistic characters for control over the Regions of Amanaar. During set-up, each player drafts 10 of 27 beautifully and individually illustrated cards.

On your turn, you play a card from your hand and take a number of actions equal to the action point value on the card. Actions allow you to reinforce your party with new followers or move your followers between the areas on the map. In areas where both parties meet, you battle. To resolve battles, both of you secretly choose one character card from your hand as a leader in this battle, using their special ability. After the special abilities are resolved, your combined battle strength is summed. If you lose the battle, remove your party from the contested area; if you win, you are now the dominant force in that area.

The game ends immediately if one of you has no party members left on the map or if both of you run out of cards. When the game ends, you add up your scores for each area to see who has the higher score. 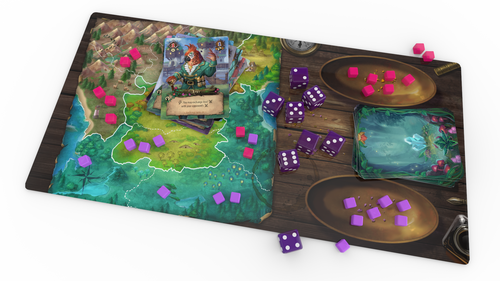