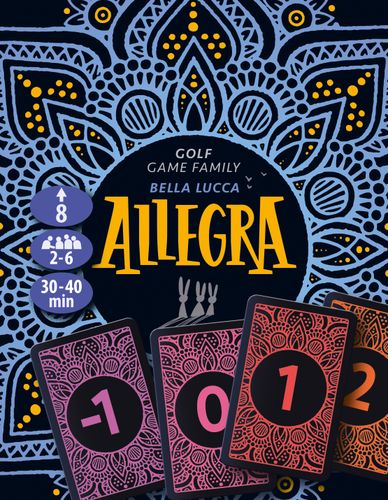 • As is normal for this time of year, German publishers are releasing info about titles for SPIEL — but the acquisition of those titles might be trickier than normal since no one will be in Essen to sell and buy games.

Drei Hasen in der Abendsonne has announced its new release for late 2020: Allegra, which is a version of the public card game "Golf", which has been the inspiration in recent years for titles such as CABO, Skyjo, HILO, and Bézier Games' Silver series.

Allegra, from designer Bella Lucca, mixes up the Golf formula by allowing — and forcing — players to cooperate in order to lower their score. Here's a detailed overview of the game:
Quote:
The deck consists of cards numbered -1 to 11, and in each of the three rounds, each player starts with twelve cards face down in a grid of four columns and three rows. Your rightmost column is also considered to belong to your right-hand neighbor, and likewise your area includes the rightmost column of your left-hand neighbor. Each player reveals any two cards in their area, then the round begins. 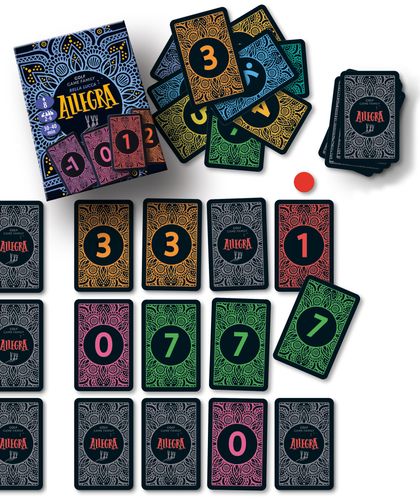 Any time you have three identical cards in a row or column — even a row that includes a card in your left neighbor's rightmost column! — you discard those cards from play.

Whenever one player has all their cards face up, each other player takes one more turn, then players sum the value of the cards in their area (which includes any cards remaining their neighbor's rightmost column). If the player who triggered the end of the round doesn't have the lowest sum, their sum is doubled. The player with the lowest total score after three rounds wins. 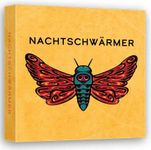 • Another title recently announced by a German publisher is Nachtschwärmer from Sabrina von Contzen of Dachshund Games. This 2-6 player game seems ideally designed for play in a German bar, and the first one hundred copies sold (via the Dachshund Games website) include a travel bag and bottle opener to complete the package. Here's an overview of how the game works:
Quote:
In Nachtschwärmer ("Night Owls"), each player is a moth that wants to reach the light in the center of the table before anyone else — but moths don't fly in a straight line, so you need to figure out how to wiggle well to win.

The game consists of one six-sided die and eight bar coasters: one a "flying" disc that has arcs marked 1, 2, 3, and 4 along its edge and seven moth/light discs. Each player takes a coaster and places it moth-side up in front of them, while one coast is placed light-side up equidistant from all players. The moth side of a coaster has two black lines intersecting the perimeter (180º apart) and a red line every 22.5º around the perimeter.

On your turn, announce a number from 1 to 6, then roll the die. If you guess correctly, you advance your moth, possibly take a second turn, or even send a player back to start; if you guess incorrectly, you might still advance (although not as much) or another player might move instead of you. 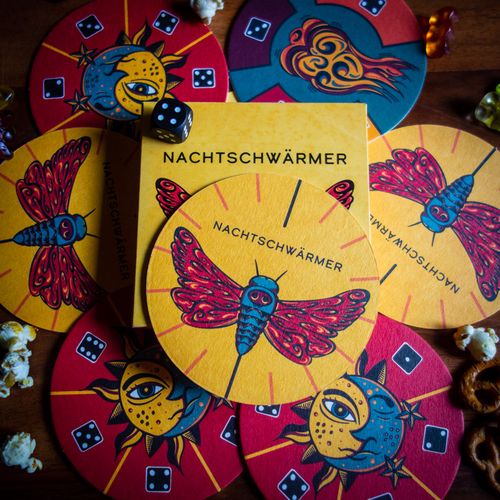 No disc can ever be placed on top of another, so if a moth is blocking your way, then you must fly elsewhere! Whoever first touches their moth to the light disc wins!

Nachtschwärmer includes three variants, one of which has you start the game with several obstacles in play, say pretzels or gummis. Any time you hit an obstacle, you must eat it, then return your moth to its starting point.
The ideal way to demonstrate movement in the game comes via this gif on the Dachshund Games website. So intuitive once you see it in action!