A question of style: picking from the board-game chalkboard

Don't fall in love with me yet, we've only recently met
Patron Badge for 2009 through 2020
Over at his sporadically-updated (like I can talk) but eminently thought-provoking Big Game Theory, Oliver is ruminating on what we mean by ‘styles’ of game.

Mezmorki wrote:
What got me launched on this was, as I said, trying to organize my own games into some logical buckets and groups. Call them styles of games if you will. I started thinking about what's going on in my brain when I walk over the game shelf to pick something out. What am I asking myself? Typically, I'm asking about the overall feelings and mood I'm looking for. How interactive is it? How long does it take to play? How brain burning is it? Do I want to laugh and socialize while I play? Or contemplate in relative silence?
I contributed a bit to the discussion but then serendipitously came across an article in the magazine that comes with my monthly craft-beer box: “Hung up on Style: Style has always been a useful roadmap, but are today’s craft brewers taking us on unwanted diversions?” which prompted some further thoughts.

Lily Waite wrote:
There’s no doubt that the beer world is more vibrant and creative than ever before. Brewers, faced with increasing competition and fewer ways to impress an ever-more crowded marketplace and stand out from the pack, are becoming more inventive and pushing more boundaries.

While drinkers are spoilt for choice with this glut of creativity, there is a risk that intrepid exploration beyond stylistic boundaries simply merges into homogeneity; what were separate and distinct styles are at risk of mushing into similarity. It begs the question: do styles even matter anymore? How important are they to brewers, and do drinkers pay heed?
Substitute beer for board games and brewers for publishers and this sounds a little familiar, right?

The article goes on to explain that the modern concept of beer styles dates back to 1977 in Michael Jackson’s “The World Guide to Beer” and that these styles went on to be precisely codified, primarily for the purpose of separating beers into different competition judging categories. Might have saved us some trouble in the Golden Geeks over the years eh…

Quote:
The idea of a framework of categorisations for the vast spectrum of variation within beer is a hugely useful one. The frame of reference that a codified language gives is so ingrained through decades of use that we’d fail to cope without it. For example, just try ordering a session IPA at the bar without using the words ‘session’ or ‘IPA’.

Within this web of meaning styles afford us, styles offer other benefits than the ability to name beer. “They are a great teaching tool for consumers. I remember when I had my first witbier in 2006 and I instantly fell in love with wheat beers. I did research to find out what other beers were like that which had me jumping into hefeweizens and other Belgian styles. Beer styles are excellent guides to discovering beer.”
This is key for me as a beer consumer but not obsessive. When I’m choosing a beer to try from a menu of 20+, I look to something like this: 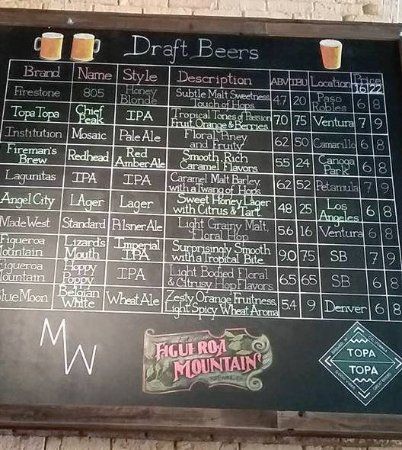 There are a couple of quantitative measures; perhaps Alcohol by Volume and International Bittering Units are the equivalents of player count and length as criteria for a first whittling-down (I’ll not bring up the ever-contentious ‘weight’ here!) but what I really want is some idea of what the whole thing is going to taste like. Sadly we can’t take a sip from a board-game taster glass or order a flight.

The style and description columns on the chalkboard provide that information in a concise way and importantly they’re experiential, not mechanical. Home-brewers might want to know the details of which hop, malt and yeast were used, the temperature it was mashed at and more but most of us just care whether we’re going to like the taste.

Similarly, I rarely find that knowing a game features delayed-action-worker-placement-with-two-half-hitches tells me much about how it’s going to feel. That’s why BGG’s new(ish) game mechanic classification seems more relevant to scholars and budding designers than players. 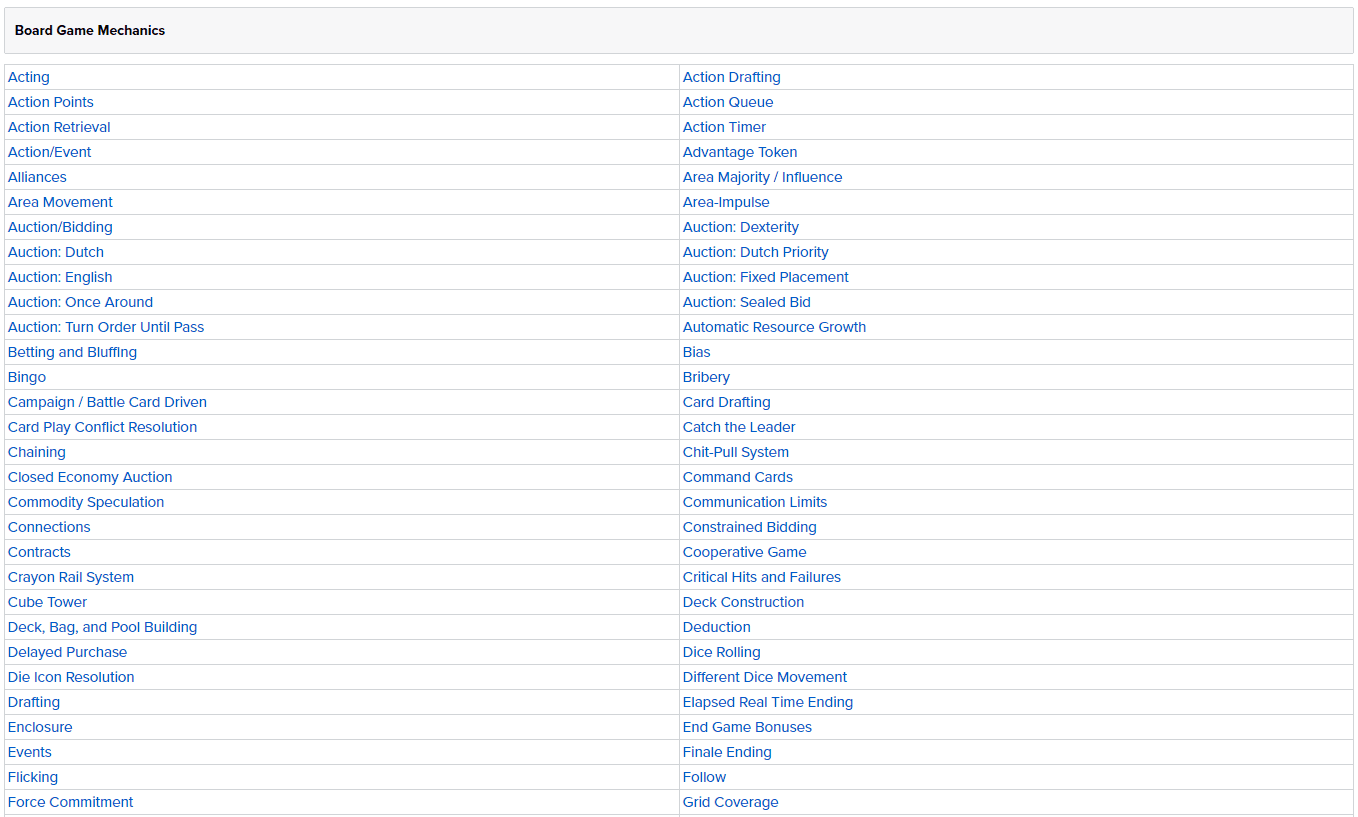 I mean seriously, that's like a third of it

So what are the ‘elements of style’ in board games? What would be put on our board-game chalkboard? Like Oliver, I think the big ‘schools of design’/subdomains (Euro, Ameritrash, wargame, abstract etc.) are too broad for this purpose. Loving Tigris & Euphrates (it is a Euro damnit!) doesn’t mean I’m also going to enjoy Castles of Burgundy.

Here are a few I think about, alongside the aforementioned player count and length, when picking out a game:

Type of interaction: how much do the other players factor into your plans? Cut-throat blocking and destruction, or gentle co-existence as we tend our parallel gardens?

Complexity vs elegance: simple to learn or lots of phases and exceptions to run through before we get started?

Player investment: does the enjoyment of the game come mostly from competition and strategizing to win? Or does it offer different pleasures like co-creating a narrative or making each other laugh?

Randomness: are the players constantly forced to adjust their plans in response to unpredictable events? Or is it more about who can look the furthest ahead and optimise their long-term strategy?

In another stroke of serendipity, just after reading Oliver’s post I came across this designer diary from Peer Sylvester, on his new game Polynesia.

Quote:
I'm quite happy with the result of the Polynesia design, which reminds me of King of Siam in the sense that it's a very deep game with a small rule set and a sixty-minute playing time with a lot of interaction and nearly no random factors. They play completely different, mind you, but I daresay that if you like one, then you probably like the other as well.
I think we could just about squeeze the bolded portion on a chalkboard and it covers most of my above points too. I share Peer's confidence that I would enjoy the game based on what I know about my taste.

Let’s throw the discussion open! What does ‘style’ in board games mean to you and what do you want to read on your chalkboard? Mine’s a hazy IPA, cheers!