Roll up! Roll up! Get your free* games here!

Don't fall in love with me yet, we've only recently met
Patron Badge for 2009 through 2020
I've been thinking of doing something like this for a while, and John has kicked me into action with his blogpost:

I have a cupboard full of too many games and I only play about a third of them in any given year. I believe that games are meant to be played and not just collected. So I'm going to give some away, following the same rules as John:

Quote:
Here are the rules for The Great and terrible Games Give Away of 2020.

One week after the post, I'll randomly choose a person to give the game to by rolling a die.

The person who wins the game agrees to pay shipping. This helps me from losing lots of money in being too stupidly generous. It also allows me to ship games internationally without being afraid of those shipping costs. If you're willing to pay for international shipping, I'm willing to otherwise send the game to you for free.

After I choose the winner out of any comments, I'll send a geekmail to get a shipping address. Once I've shipped the game, I'll send another geekmail with my paypal info so that the new game owner can pay whatever the actual shipping costs were.
His rule about the new owner playing the game is vitally important to me. I'm not doing this to move clutter from my dusty cupboard into yours. So if you want one of the games I'm offering, let me know why you think you'd get it played and after you've done so, I'd love to hear how it went.

First up is a Knizia! Prosperity, his co-design with Sebastian Bleasdale, is a bit too much on the optimisation side for my taste but could well be up someone else's alley. 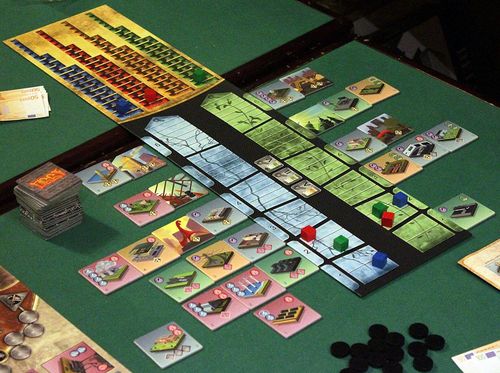 EDIT: having thought about this a bit, I'm going to change the terms slightly. I reserve the right to pick the winner however I like, rather than randomly. You will improve your chances by explaining why you want this particular game and who you think you'll play it with.