A blog about looking at, and approaching, game design from an uncommonly different perspective.
Recommend

Patron Badge for 2017 through 2019
Everyone has an internal interpretation of the ideas, "complexity" and "depth". Though, if you ask any random two people what are their interpretations, you'll very likely find that they either aren't in sync, or that one or both of those people can't articulate more than a foggy high concept. In this article, I offer my own fleshed out definitions of these two ideas, in effort to help crystallize them for those of you who don't already have solid interpretations—in effect adding to your game design toolbox some concrete metrics to build with.

Complexity: The meaningful intersection of two independent base rules.

There are a couple of key concepts in that definition that must be grasped in order to fully comprehend it: 1) "base rules" and 2) "meaningful intersection".
Quote:
1. A "base rule" is an unmodified rule that can't be removed from the system without radically changing the game design. For example, a base rule in Chess is the player must move one piece on her turn. The patterns of valid cells to which each piece may move are not base rules, but rather extensions of the base rule (extensions like these do not affect the complexity of a system, one way or the other).
2. "Meaningful intersection" of two rules occurs when the execution of one rule either modifies or serves as input into the other rule in a manner that has weighty impact—that is, impact resulting in a change to the way that the affected rule alters the game state (not just a change to the value of a game variable within the rule).
So, now we can confidently understand that complexity arises when a player follows one base rule, and in doing so changes the way that another base rule affects the game state. Consider two hypothetical rules: A and B.
Quote:
A) You may draw one card from the draw pile.
B) You must either swap the positions of two different colored towers on the board, or destroy any one tower to reset the empty draw pile.
Rules A and B are both base rules. If A is removed from the system, players' card hands operate on a positive feedback loop, which would fundamentally change the game design. If rule B is removed, towers' positions on the board do not change, and the draw pile operates on a positive feedback loop—again, significantly altering the game design in two ways.

Rule A intersects rule B in a meaningful manner. If you choose to draw a card, and that card is the last card in the draw pile, you now have an option to leave the tower positions unchanged and completely remove a tower from the board, thereby resetting the draw pile. Rule A served as input into the possibilities in executing rule B. This is interesting because now each time a player chooses to draw a card, she might immediately trigger the destruction of a tower and return card possibilities to all players, or she whittles the draw pile down toward that option becoming available to someone. Adding a card to your hand might be good, but does the good outweigh the destruction of a tower at this or some foreseeable point in the game? Does the good outweigh the possibility of someone else taking a certain card in hand?

Rules A and B are complex. Conversely, imagine if rule B were just ever so slightly different:
Quote:
B) You must either swap the positions of two different colored towers on the board, or destroy any one tower to reset the draw pile.
The only difference is that the requirement of the draw pile being empty is gone. Rule A now no longer intersects rule B—it doesn't matter whether or not you draw a card, rule B will remain unchanged either way. Now, rules A and B aren't complex. Now, the choice to draw a card isn't interesting—why wouldn't you bolster your hand with another card?

Measuring a Game's Level of Complexity

(You might be thinking, "No, a game with only 10 rules is simple!" If you're thinking that, then you're mixing up "simple" with "elegant", two very different ideas. Simple is the opposite of complex, and indicates that a low percentage of a game's rules result in complexity. Elegant, on the other hand, indicates a low number of rules.)

Having a concrete metric for how complex a game is can be very helpful in both the analysis of a game design and the development of a game design. What's really cool is that we can easily visualize this measurement! Let's consider an imaginary game with base rules A, B, C, D, E, and F.

First, we build a 2D matrix with each rule existing on both the X and Y axes. Each cell in the matrix represents the intersection of the rules that are cross referenced there. We grey out all duplicate cross references, since they would represent redundant intersections between rules.

In a game that is perfectly complex, that is every single base rule intersects each other base rule (very rare, and harder to achieve the more base rules a game design includes!), our visualization will end up looking like a solid staircase leading down.

If you're designing a game, working with this visualization method is a great way to track progress toward injecting (or removing) as much complexity as you desire into the design. See an unmarked cell in the staircase, and you aren't already happy with how complex your game is? Look at the two rules that are cross referenced in the cell, find a way to tweak them so that they result in complexity, mark that cell when you're satisfied, and move along! You feel your game is too complex for the intended audience? Simply find marked cells and break the complexity link between the cross referenced rules until the staircase looks more incomplete.

Depth: When the consequence of a decision greatly ramifies into newly created choices.

Before moving on, let's solidify a few terms:
Quote:
1. A "choice" is a set of options to pick from.
2. A "decision" is the selection of an option within a choice.
3. A "ramification" is the creation of a new choice via a decision.
The more ramifications a decision has, the deeper the decision is. It's most helpful to envision this behavior in the manner of a tree structure. 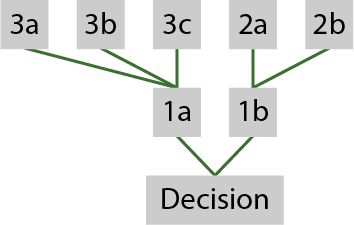 Using Chess as an example, we can see that making almost any decision (moving a piece) results in the new choice of a great number of other possible moves. And, if we make any of those new moves, the consequence is another new choice of other possible moves. The initial decision ramifies greatly—and, in fact, without outside interference, the decision ramifies infinitely (the one exception being decisions for a pawn, which has a terminus to its possible moves). Chess is filled with deep decisions. 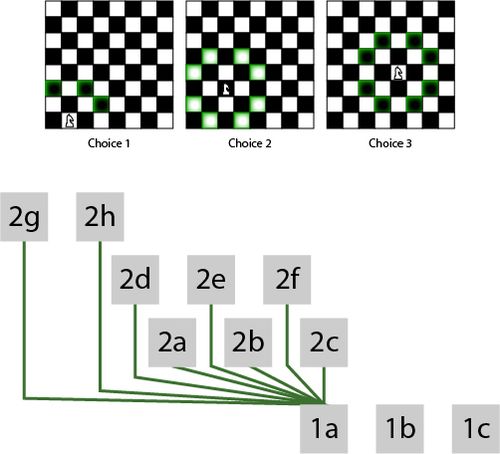 Choice 1 offers three options. In picking 1a, new choice 2 is created, which offers eight options. Any given choice in this infinitely ramifying tree offers up to eight options, each option (decision) resulting in its own new choice.

Depth and Complexity are Not Related

It's important to grasp that these two ideas are very different and unrelated, and that in analyzing or building a game design you must consider both separately. Complexity regards how base rules interact in meaningful ways, while depth regards decisions creating to new choices. It's certainly possible that a deep decision can be built upon complex rules, but that depth does not come from the complexity of those rules.

Let's consider a practical example—sticking with Chess since I've already referenced it a couple of times previous. Chess' base rule of "on your turn you must move one piece" yields no complexity. There is no other base rule in Chess that is either modified or modifies the must move rule. You must move, and after that, you must move on your next turn—there is no change to this base rule or any other resulting from your move. Yet, each time you make a move (decision), a number of other possible moves (a new choice) is created. Chess is a deep game, but Chess is not a complex game. Before you burn me at the stake for derogating your favorite game in claiming that it's not complex... Step back, take a deep breath, and break it down for yourself. Also, understand that my claim is in no way actually derogatory—a game can certainly lack complexity and still be an excellent game. Complexity and depth are not necessarily badges, but rather states of being that can be either positive or negative, considering your goals as a designer or what you're looking for as a player.

Let's conclude with an exercise. Can you determine which games below are not complex but are deep? Which are complex and shallow? How about complex and deep?
Quote:
• Go
• GIPF
• Warhammer 40K
• Teotihuacan
• Pax Pamir
• Spirit Island