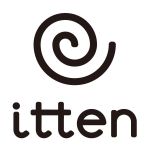 • Tokyo Game Market is currently scheduled to take place Nov. 14-15, 2020, but perhaps due to the COVID-19 situation that will allow for few people outside of Japan to travel to the show, several Japanese game publishers are turning to Kickstarter to make their games available to a wider market.

Crash Octopus, for example, is the second game that itten is funding via Kickstarter, with Stonehenge and the Sun (which I covered in Dec. 2018) having been its first. Designer Naotaka Shimamoto often creates highly interactive games that simultaneously function as interactive art exhibits, and Crash Octopus seems to fall into this same category. Here's an overview of this 2-4 player game that is being funded on KS (link) through October 27, 2020:
Quote:
In Crash Octopus, players race to collect cargo that's floating in the ocean, while surrounded by a horrifically giant octopus. The first player who collects all five types of cargo on their ship wins. 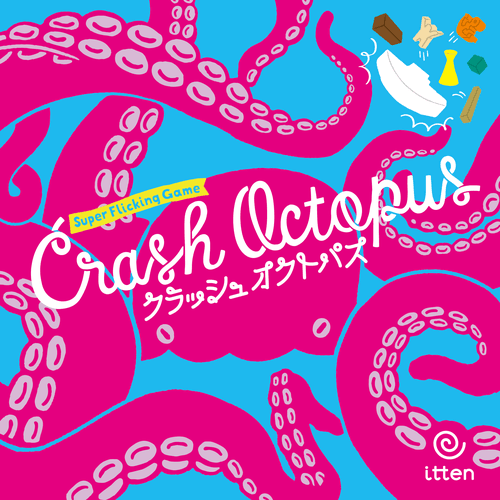 On a turn, a player uses their flag to either navigate — by flicking the anchor next to their ship, then moving their ship to touch the anchor — or flick cargo. Cargo comes in five types — goblet, chest, gem, gold, and captain (yes, really!) — and you can flick any type of cargo that's not on your ship toward your ship. The only exception is that you can't flick the single cargo item closest to your ship. If the flicked cargo misses your ship, your turn ends; if it hits your ship, you load that cargo, then advance the cargo tracker, which is a string of beads on the perimeter. 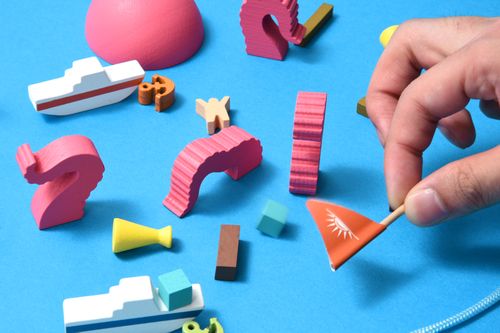 If you advance a black bead on the cargo tracker, the octopus attacks! Each player takes a turn dropping a die and bouncing it off the octopus' head, possibly moving the head or a tentacle to get in the way of others picking up cargo and possibly knocking cargo off a ship. What a setback!

• Not quite in the same category is Dangerous, a design from たつがわ けんご (Kengo Tatsugawa) that was first released in 2018 by オトコマエゲームズ (OTOKOMAE GAMES) and is now being localized by Raw Potions Publishing, a U.S. publisher specializing in localizing JP games.

(Raw Potions' first release is Save the Last Dance for Me, a game from Geno and Seisyun Koubou Shirayuri in which 4-8 players try to hold either the "Princess" or "Prince Edward" card at the end of the game so that they can dance together and win.)

As for Dangerous, which is being Kickstarted (link) through October 9, 2020, it's a small quasi-deduction game in which you're trying to assemble the right hand of cards in order to score:
Quote:
The world is about to end, but nobody is quite sure exactly how it's going to happen. In Dangerous, your goal is to save as many innocent lives from certain doom as possible. To do so, you must outsmart your rival investigators and correctly deduce which apocalyptic predictions are true and which are false. The player who saves the most lives wins. 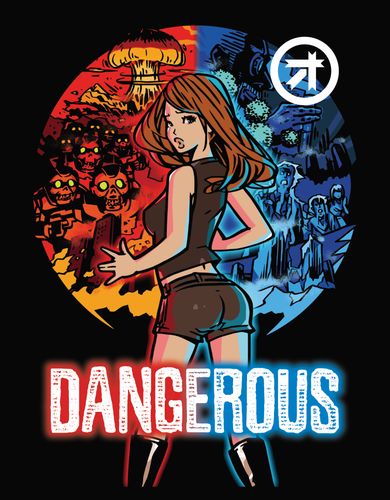 The lead investigator for that round places one of their two personal tokens by a hoax prophecy tile, looks at that tile, then chooses a card from that column and places it face up in front of themselves. Each other player then chooses a card from this column. If a hoax prophecy tile has two player tokens next to it, don't refill it; otherwise, do refill it. The next player becomes the lead investigator, and this process continues until each player has chosen eight cards, which they now take in hand. 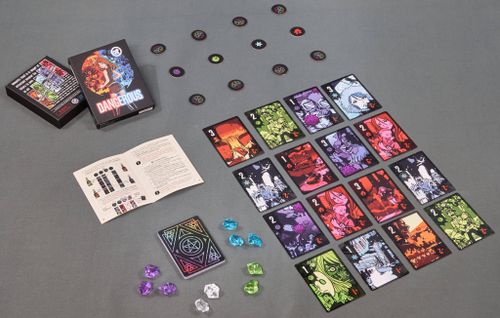 Now you evaluate how well you predicted which disasters will take place. The lead investigator reveals one of the true prophecy tiles, then all players simultaneously reveal two cards from their hand. For each card that matches that revealed prophecy, you score positive points equal to the value of the card; otherwise, you lose points. If the prophecy tile instead shows 2x, you score positive points if you lay out two cards of matching value, but different suits; any other combination loses you points.

Record your scores for the round, and after a total of four rounds (with four players), whoever has scored the most points wins. (With two and three players, you make adjustments to the number of cards and prophecy tiles used and rounds played.

• And here's another licensing-related post along the lines of what's above: U.S. publisher Level 99 Games has announced that it will Kickstart the Sakura Arms game line from designer BakaFire, who releases titles under the brand BakaFire Party, with the KS campaign (link) launching on October 27, 2020.

Sakura Arms, which debuted in Japan in 2016, has been hugely popular in that country, and when a new expansion was available at the Tokyo Game Markets I attended, the line was vast. U.S. publisher AEG released an English-language version of the Sakura Arms base game in 2017, but that was the extent of its licensing.

Level 99 Games, which specializes in two-player dueling games and which seems like an ideal partner for this line, has stated its edition of the Sakura Arms game line will be released as three standalone games, with each containing six goddessess. That statement will make more sense once you know something about the game:
Quote:
Sakura Arms is a two-player dueling game in which players first choose two of seven megami (Japanese goddesses), each of which has a different keyword that empowers some of their cards. Players then see what the opponent chose before assembling a deck of ten out of 22 cards, with the players choosing cards both to take advantage of their own megami powers and to exploit their opponent's weaknesses. Players then duel to see who will be victorious. 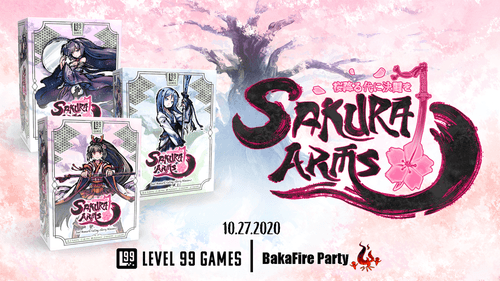 The game uses a single kind of token to represent life, distance, aura (defense), and flare (special energy) based on the zone these tokens occupy. By moving tokens between zones, you attempt to gain the ideal position and set up as many attacks as possible — or be prepared to avoid attacks.