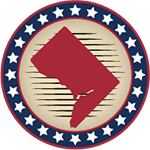 The composition of the U.S. Supreme Court following the death of Justice Ruth Bader Ginsburg is a topic that's received lots of airtime over the past couple of weeks — well, as much airtime as it could given everything else that's going on — but for this post we're going to sidestep the current situation to talk about the U.S. Supreme Court more generally thanks to the announcement of the 2021 release First Monday in October by first-time designer Talia Rosen and publisher Fort Circle Games.

The game's title refers to the starting day of the U.S. Supreme Court's new term following its summer recess, with this day having been set by the U.S. Congress in 1916. (Previously the new term started on the second Monday in October, and prior to that it started on the first Monday in December. Originally the Supreme Court met in two sessions, starting in February and August.) The justices use their summer recess to prepare for the workload of the next term, with court cases starting immediately on the first Monday in October.

As Rosen explained in an August 2020 designer diary about the game on Opinionated Gamers, she had never thought that she'd design a game. Here's an excerpt:
Quote:
Whenever I told people about my strategy board gaming hobby, I would almost inevitably get a question about when I would make my own game. It's not that simple of course. There are so many strategy board games these days. There seemed like a ton when I started down this rabbit hole in the late 1990s, but now the volume is truly mind-boggling. And yet, the idea for First Monday in October just would not let me be.

The concept took root many, many years ago. After moving to Washington, DC in 2009 for work, I joined a new game group, which happened to be hosted at Jason Matthews' house. I was already a fan of his work, but I had no inkling at the time of wanting to design a game inspired by Twilight Struggle. Then one fateful evening a couple years later, Jason made an off-hand remark about never having figured out how to make a historical card-driven game about the Supreme Court. We were in the midst of playtesting 1989: Dawn of Freedom and discussing the various historical themes that could be interesting to explore. Jason mentioned his concern with who or what the players would reasonably represent in an overarching Supreme Court game, and I made a joke about loving the bizarreness of the parrot fish and shrimp in Reef Encounter. I promptly moved on with my life, but my subconscious had other plans.
The diary details the decade-long path that the game's development took, with many of Rosen's favorite games (Through the Ages, Maharaja, Santiago, and yes, Twilight Struggle) getting name-checked as influences for this element or that, such as a menu of actions and the ability to spend points to take stronger actions. 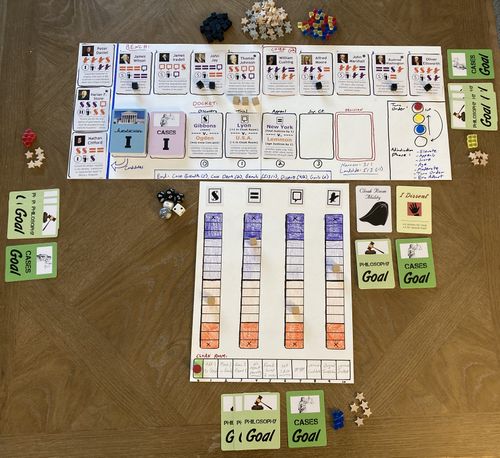 Prototype components showing the completed game set-up
Here's an overview of the final game's setting and structure:
Quote:
Over the course of two hours, First Monday in October re-creates the history of the U.S. Supreme Court from 1789 to the present day, through three distinct eras: Era I represents the founding of the Court in 1789 until the Civil War in 1865; Era II represents 1866 until the seminal decision of Brown v. Board in 1954; and Era III represents 1955 until the present day.

The game revolves around the following four judicial philosophy tracks, with each player representing a think tank that's trying to influence opinion on them:

Shifting each philosophy one way generally represents a more expansive centralized Federalist interpretation of these constitutional provisions (consistent with a Hamilton-Madison perspective), whereas shifting each philosophy the other direction represents a more narrow decentralized Anti-Federalist application of these provisions (consistent with a Jefferson-Monroe perspective).
In more detail, during set-up, you lay out nine of fifteen starting justices at random, adjusting the four judicial philosophy tracks based on their outlooks. You set up a deck of judicial candidates and cases by removing a few cards at random secretly from each of the three eras, then stacking the cards with Era I on top, then laying out the first three cards of each deck.

Prototype components
Each round you take three actions from the six actions possible, with you being able to repeat an action during a round if you spend 1 renown point, with "renown points" being the scoring method used in the game. Additionally, by spending 1 renown point while taking an action, you instead take the "boosted" version of the action. Instead of taking 4 of your influence cubes from the reserve, for example, you take 7, and instead of placing 1 influence cube on a judicial candidate, you place 2. Other actions include advocating for one side of a case before the court, adjusting one of the judicial philosophy tracks through the publication of a scholarly article, pushing a justice or judicial candidate toward retirement (via an aging mechanism that can remove justices and therefore shift the judicial philosophy tracks), and advancing toward the cloak room, which is a mixed bag of actions based on how far you've advanced along that track.

After all players have completed their actions, you conduct an adjudication phase to fill vacancies on the bench, elevating the one or two candidates who have gained the most support, with those candidates then shifting the judicial philosophy tracks. A new case is added to the docket, and in all rounds following the first a case is scored, with the winning side being determined by the current position of the relevant judicial philosophy track. A victory can be narrow or a landslide, and if you have influence on a sitting justice, you can have them "write an opinion" or "write a dissent" for the case, the latter of which might allow you to cancel the global effect of that case. (Rosen writes more about these global effects here.) 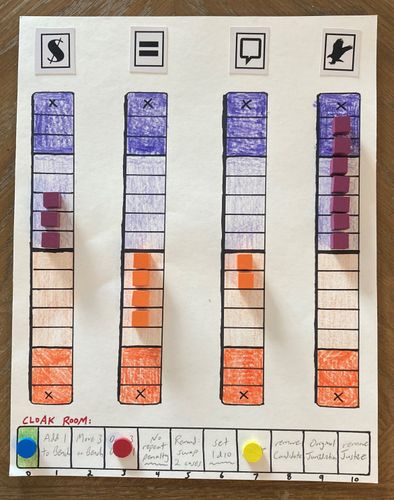 Updated prototype components for the judicial philosophy tracks
Justices might age out during the adjudication phase, leaving you with a vacancy on the court during the subsequent round (timely!), and if a judicial philosophy track has cubes in its darker section, then you remove one cube from the end of all tracks that aren't near the center, thereby moderating the opinions of the court. (You might think of this as people becoming more used to the philosophies being expressed, with the extreme thereby coming to seem like expected behavior instead of something aberrational.

When the judicial candidates deck or the court case deck shows a card from the next era on top of it, you remove all cards from the current era from the top of the other deck. Thus, in a game with lots of judicial vacancies, you'll advance through the candidates more quickly, which means you'll see fewer cases, and if justices stick around longer, then the judicial philosophy tracks might be less volatile, requiring you to spend more influence to move them directly. 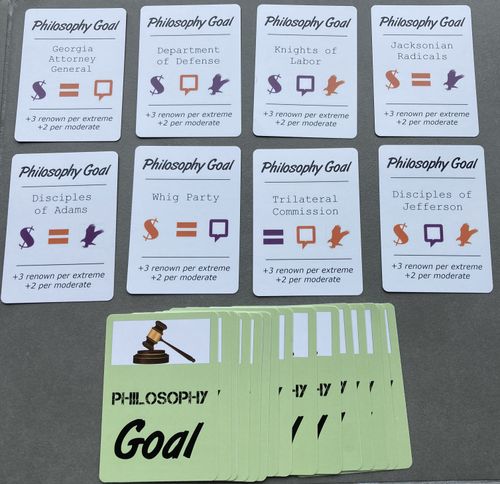 Prototype components
At the end of a round when Era I or Era II ends, you discard one of the three philosophy goal cards you had in hand at the start of the game. At the end of a round following the exhaustion of one of the decks, the game ends and you score points for your remaining philosophy goal card (based on how well it matches the tracks) as well as your case goal card (which shows the types of cases in which you wanted to specialize). You can claim scored case cards during the game by having the most influence on them, and additional points are available for collecting the most cases in a judicial philosophy or for having a case in all the judicial philosophies (since having depth or breadth — or both! — allows the think tank, i.e., you, to show your influence on the country as a whole).

First Monday in October is for 2-4 players and has a playing time of 90-120 minutes, although you can play a shorter game in 60-90 minutes by ditching the starting justices, placing candidates from Era I directly on the bench, and using only the Era II and Era III cards. Fort Circle Games plans to Kickstart this design for release in 2021. 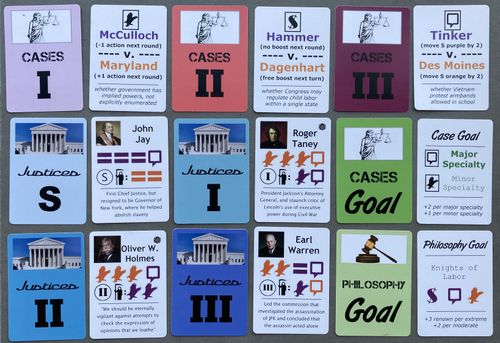