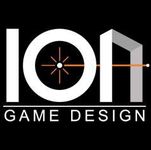 While I have only limited experience with Bios:Origins and most of the Pax series from Ion and Sierra Madre, I can't help but be excited whenever they have new releases on the horizon. I'm especially excited because their new releases seem to be getting more and more accessible, yet maintaining the special and unique gameplay elements for which they're known, which means I possibly can get them to the table a lot easier and a lot more often — well, with the exception of High Frontier. I don't know whether another game excites me and terrifies me quite as much as High Frontier. I'll try it one day, though...one day.

In the worker-placement game Galenus, we jump back to the year 176 CE when 1-4 players compete to gain knowledge, cure patients, and publish works to become the best doctor in Ancient Rome. Here's some additional background and details from the publisher on how the game plays :
Quote:
Medicine in Imperial Rome is an art of celebrated advances, an art of showmanship and bitter rivalry between practitioners all with their own entourages. There is one doctor above all others: Galenus. The writings of this second century Greco-Roman would be the epitome of medicine for one thousand years to come.

In Galenus, the players enter this arena as doctors starting out by studying, treating patients, accumulating reputation, and competing against each other in showy demonstrations. The goal of the game is to be the best young doctor, primus inter pares, by collecting the most favor in the eyes of Galenus over five rounds and thus becoming his friend and student. Galenus looms over everything the players do, and he will crush all who dare challenge him. 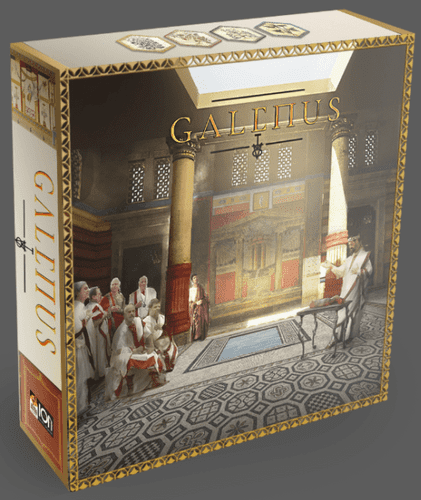 Box concept art
Galenus is a worker-placement game in which you place up to six action pawns, then decide when and how to resolve them. In this way, some players can still be placing pawns while you are already resolving them. You can choose to cure patients, which will gain knowledge in one of four types of ailments; publish works based on that knowledge; show off your skills in the theater; acquire medicines to aid your work; rest to rejuvenate your own health; or adopt a new philosophy.

At the end of the round, you compete in medical contests via blind bidding that may give you more prestige. Whoever has the most points gained from these various tasks or first publishes eight works wins.

Bios: Mesofauna is the latest addition to the Ion/Sierra Madre's Bios series, and it was designed to be a gateway into the series since it has the easiest ruleset, in addition to varying levels of difficulty suitable for children to experienced gamers. In the game, 1-4 players duke it out as arthropods, mutating and creating new species, while vying for dominance and avoiding becoming extinct. Here's a high-level overview from the publisher:
Quote:
Bios:Mesofauna is an alternative Bios:Megafauna, that is, it starts and ends at the same time. It follows the same sort of Achterbahn environment, same climate change, same or similar creeples, same VP, same tiles, same card colors, same cratons and drift, same basic and Achterbahn games, same catastrophes, same greenhouse, cloudiness, and oxygen. Same terrestrial settings. The setting is the same — only the animals are smaller.

Bios:Mesofauna is a deliberate attempt to reach a wider audience than Bios:Megafauna by stripping away about half the rules. Monsters, tools, horror plants, kiwi, haustorium, dark heart, Mars, Venus, shelves, blooms, Offshore, and Cheshire Cat have been dropped. More significantly, marine variant and size were also dropped, and these two decisions are worthy of more discussion.

The two games integrate with each other, making it possible to play a game with a combination of player roles from the two games. 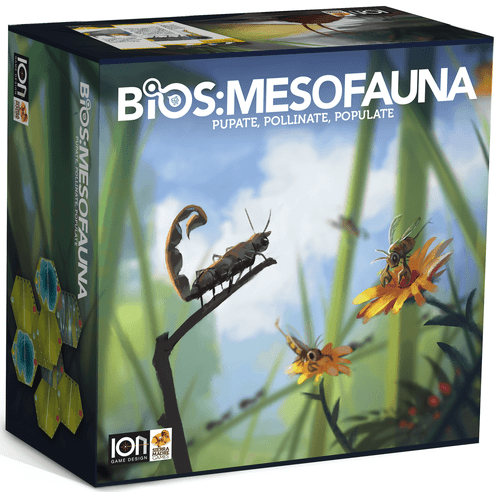 I'm looking forward to the day (or weekend more likely) in which I play the entire Bios series starting with Bios: Genesis through Bios: Origins and finishing off with High Frontier to see how these games flow together back-to-back. I'm sure it'll be an epic gaming experience...assuming my brain doesn't completely fry midway through!