Create Awe with Your Fireworks, and Keep Nessie's Identity a Secret 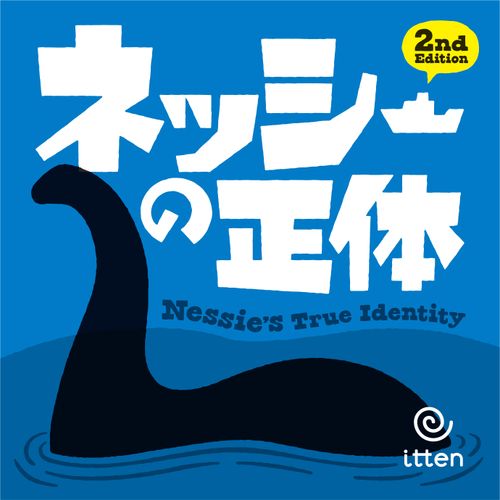 • In 2019, Japanese publisher itten released a teensy version of Nessie's True Identity (ネッシーの正体) from designer Naotaka Shimamoto. Now for the Tokyo Game Market scheduled to take place on Nov. 14-15, 2020, itten plans to release a second edition of the game with larger components, reorganized rules, and a few additional items.

Gameplay remains the same, though, and here's how this deduction game for 2+ players plays out:
Quote:
As the only witness to the mythic creature, you are determined to protect Nessie's romance and mystery, while also providing hints to the enthusiasts to promote the creature's popularity. Enthusiasts, get on the search boat to discover Nessie's True Identity! Will the truth be uncovered? Or will the mystery deepen?

To play the game, place the Nessie figure on one end of the table and the ship on the other end, with the five characters W H A T ? lying down between them. If you are the lead player, think of any noun to serve as Nessie's true identity. (Proper nouns are discouraged.) The other players — the Nessie fanatics — now try to guess this identity.

At the start of a round, you give a one-word hint to the hidden identity. Each fanatic then makes one guess about this identity in whatever order they want. If none of the guesses are close to Nessie's identity, move the ship farther away from Nessie and stand up one of the letters; if any guesses are close but not correct, move the ship closer to Nessie, then stand up one of the letters. 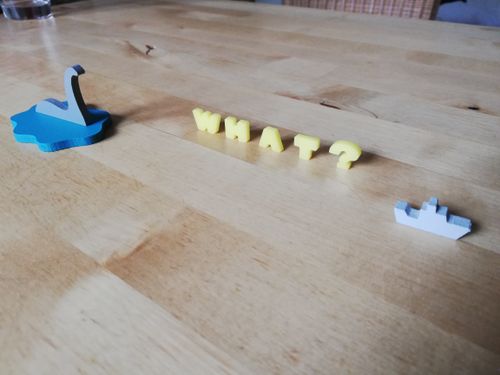 First edition components
If one of the guesses matches the identity, don't reveal this when the player guesses. Instead, at the end of the round after all players have guessed, move the ship adjacent to Nessie. On the count of 3, each fanatic must point to the person who they think gave the correct answer, which might be themselves. If more than half the fanatics identify the correct guess, they win; if not, then you win. If five rounds pass and no one has guessed the correct answer, then you'll all be staring at WHAT? and realizing that the clue giver didn't do a good job.

Nessie's True Identity includes a scoring system in case you want to have everyone be the clue giver once and keep track of points earned over multiple games. 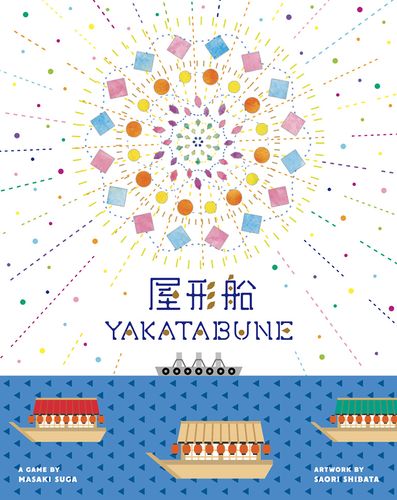 • Artist Saori Shibata creates gorgeous-looking games, both for Japanese publisher analog lunchbox (Airship City, passtally, Dazzling Diceline, Orchard Ocean) and now for POLAR POND GAMES, where she is once again paired with Masaki Suga (designer of those aforementioned games) for the release of Yakatabune, a.k.a. 屋形船.

Yakatabune is a two-player-only card game that seems like it has a lot going on in very little space. Here's an overview of this Game Market release:
Quote:
In Yakatabune, you and another player are rival pyrotechnicians who are competing to prove your mastery in the summer's most anticipated fireworks festival. To do so, you need to place fireworks cards on your side of the river to complete your program cards while attempting to earn the applause of each "yakatabune" — that is, "houseboat" — card by having a majority in that column.

In more detail, to set up lay out the seven yakatabune cards in a row; place three starter fireworks (value 1) on the starting player's side of the board and four starters on the other side in alternating columns. You start with two cards in hand from your deck of 13 cards, and you choose two program cards from the three you're dealt.

On a turn, play a fireworks card on your side of the board in the closest empty space next to a yakatabune on your choice. Your opponent may then use the effect of that fireworks card — swapping two cards, shifting a card to an adjacent space, or flipping a card — on either their cards, your cards, or the yakatabune, depending on the icons depicted on the associated yakatabune. Alternatively, your opponent may decline to use the effect and instead draw a program card.

After you play a card, if you have a program card in hand that matches the pattern of fireworks on your side of the board, you can play that card, take the bonus actions on it to shift one or more of your cards, then play another program card if you now have that pattern. 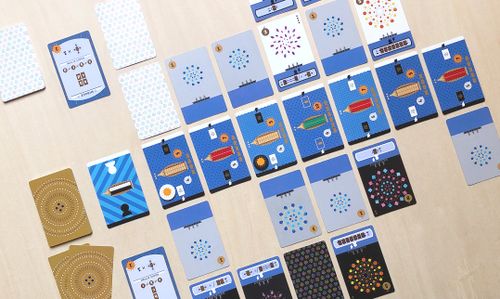 Next, if the number of cards surrounding a yakatabune equals or exceeds that boat's limit, you sum the fireworks on each side to see who has captured the awe of the viewers on that boat. Mark this boat with an applause token, then turn all of the winning player's fireworks face down. (Face-down cards can still be used to complete many pattern cards.) End your turn by drawing a fireworks card from your deck.

When the game ends after five applause tokens have been placed or the fireworks or program cards run out, players tally their collected awe to see who wins.