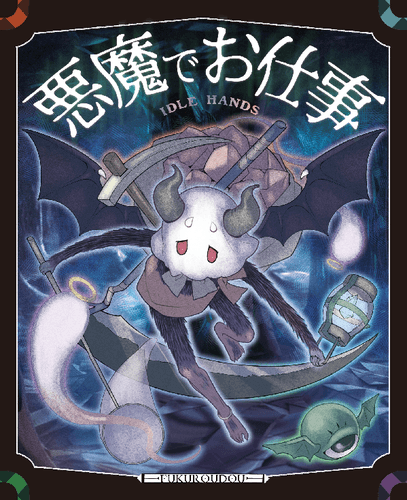 • Trick-taking games are always plentiful at Tokyo Game Market, and at the Nov. 14-15, 2020 event designer Fukutarou of 梟老堂 (Fukuroudou) will present Idle Hands, a.k.a. 悪魔でお仕事, which is for 3-4 players and which will have you trying to take or avoid tricks at various times.

Fukutarou says that English rules will be available by the end of November 2020, but here's a summary of the gameplay for now:
Quote:
In the must-follow trick-taking game Idle Hands, the led suit is determined by an extra card played to the trick from among a player's face-up task cards. The highest card of the led suit wins all the cards, then adds the task card to their hand! Every trick is worth points, but this isn't necessarily a good thing since the 4s and 8s are worth their face value in negative points.

At the end of the game, whoever has the most points — or more frequently the fewest negative points — wins!
• At Game Market, Japanese publisher Oink Games will debut a special "Sanrio characters" edition of its quick-playing, tile-flipping game Nine Tiles from Jean-Claude Pellin. You can watch an overview video of the game here, but the gist of the game is that each player has a 3x3 grid of double-sided tiles, and after a target card is revealed, everyone must flip and move tiles to recreate that pattern and claim the card.

Nine Tiles: Sanrio Characters will include rules in Japanese and English, but will be sold in Japan only, presumably due to licensing restrictions. 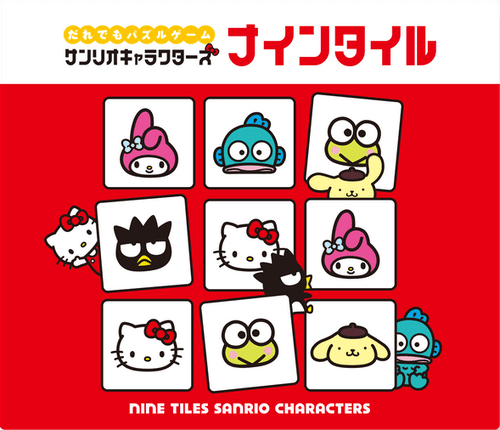 • Oink will also debut a new game at the show — Hey Yo: The Card Game to the Beat, a design for 2-10 players by Takashi Saito. Here's a short description that's somewhat minimal on gameplay details:
Quote:
In Hey Yo, you all play cards to a shared music chart so that you can ideally create solid rhythms and score points. The game includes a small dedicated device that you can use to accompany the gameplay, with players needing to play a card when the music indicates this. If you can't play in time to the rhythm, you're penalized, so you must talk quickly to share information and decide which cards to play. (Alternatively, you can play music of your choice to set the rhythm of play for the game.) 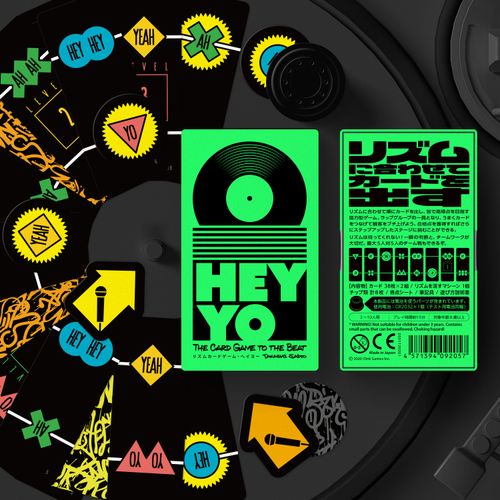 Hey Yo includes two identical decks of cards, so instead of playing a co-operative game with 2-5 players, you can have 4-10 players split into teams to compete against one another.
• Hey Yo appears to be a new or modified version of Saito's FiveLines, which he released through his own BrainBrainGames in Nov. 2019. Here's a description of that game, much of which might apply to Hey Yo:
Quote:
FiveLines is a game played while listening to music, and the active player must play a card according to the rhythm of that music.

Your goal is to co-operate to achieve a high score. On the beat, you play one of your four cards in hand to the end of the line, then draw a new card. If you miss playing on the beat, you'll play one fewer card total and probably miss out on points. Each card has five lines on it, so when placed together, they look like a music score. Sometimes a line is blank, sometimes it has 1-2 colored symbols on it, sometimes it has an X over the colored symbol, and sometimes the symbol has a scoring halo around it. 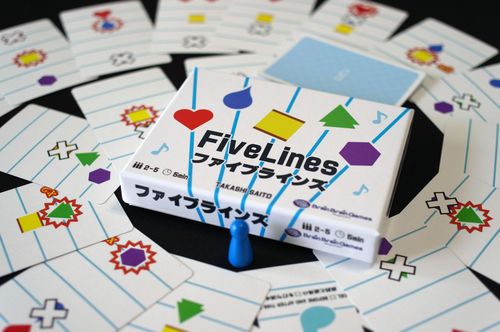 Once the music ends, you advance from the first card onward with a pawn, stopping whenever you hit a scoring halo. You then count backwards to see how many symbols of that color (shape) there are before you hit an X, with the symbol inside the halo also counting. Sometimes a halo has an "x2" mark to indicate that you double the score for that halo. Some cards consist of nothing more than a "cancel" symbol, which tells you to ignore Xs on either side of that card. Combine your cards to score lots of points, with anything higher than 100 being excellent!