Why aren't there more out there? That's totally rhetorical as I think I know why: No one wants to be faulted for losing a game, especially by a sore loser, and many don't want to share a victory.

Still, I adore alliance games as they offer the most interaction for any kind of game next to negotiation games and perhaps RPGs (especially GM-less ones): You essentially have the dynamic of both cooperative and competitive play all at once.

I won't get into party games, as there are a lot of team-based party games, and the emphasis is not on strategy and gameplay but on giving people something way more interesting to do than struggling through small talk. Also, most of them involve trying to get your teammates to guess something based on a series of clues. Or performing some mildly humiliating action for the pleasure of everyone else.

I won't get into social deduction games either as those focus on determining who's on which team. And I'll skip stock holding games.

The bulk of the games that are left are traditional trick-taking games, but I'll try to find games outside that genre.

Fixed teams, or more specifically, fixed partnerships, is one of the most popular player configuration among traditional trick-taking games. And unfortunately one of the least popular among every genre outside trick takers!

You probably heard of anecdotal stories of nasty fights among long-term Bridge partners, some leading to divorce or even murder. But the sensationalist tends to be the expectation rather than the rule. The reason why these disputes arise is that long term Bridge players develop ways to communicate strategies and tactics through play alone, and that's the reason I believe why that game is beloved by so many. And it's not only Bridge that has this feature. Players have developed ways to communicate through card play or bidding in every traditional trick-taking game, including Whist and Belote.

Unfortunately, for me, there is no game I would want to play regularly and seriously for a long period of time. It's really only though repeated play, and study, that players could develop these ways to communicate through game play. And if a game expects you to do this to play at a rudimentary level, then that's a turn-off for me.

One other more serious issue about fixed partnership games is that players could develop communication signals *outside* what's permitted in play, which is essentially cheating. It's something I don't really have to worry about as my gaming is strictly casual, but it's amusing to see the extents to which Bridge organizers go to prevent cheating. Check out this Bridge screen, which is apparently standard equipment in some tournaments: 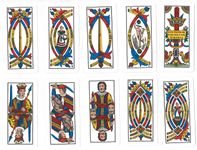 Despite me pissing all over fixed partnership games, when played causally, these games offers a certain amount of joy not found in other games, which I discovered during a game of Madrasso, a wonderfully simple fixed partnership, point-trick game. In only one game, we'd develop a rapport with our partners over the course of several rounds, developing a language of niceties and praise when we'd make particularly helpful plays. And trash talk becomes a bit blunted as it's spread over two players, which subtly gives you permission to make trash talk more sharper and harsher!

As for non-trick-taking fixed team or partnership games, I couldn't think of many:

Lumis: Der Pfad des Feuers -- it's basically Ticket to Ride but faster to play and easier to explain. 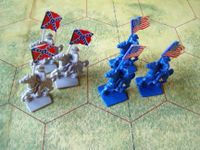 Battle Cry -- I played this once in two partnerships. I can't find the original BGG post with the rules we played with, although I found this:

I believe that there are "overlord" variants that require two copies of the game. But I believed we just played with the standard rules. Each player got five cards and turn order alternated from side to side rather than clockwise.

Now the question is, couldn't *any* two player game with some kind of hidden information, like cards, be converted into a fixed partnership game? There's already a four player variant for Lost Cities:

Can I play with 4 players without the 2nd set of game?

There's also 1812: The Invasion of Canada where players on the same faction could look at each other's hand of cards, which is essentially the same as the two player game. The game works better as a multiplayer game with its full complement of players, though, as it's a bit fiddly for one player to control multiple factions.

Initially, I was lukewarm toward this idea as I thought it's way too luck-ridden. I also never had much experience with this mechanic until recently as most of the Tarot games I've been playing until recently was four-player French Tarot, and the declarer always plays alone against the other three players, who form one team. But after playing trick-taking games where partners can choose each other, my opinion about this reversed and this is probably my favourite way to setup partnerships. (More about this in the next section.)

Among the few five-player trick-taking adaptations for trick-taking games, many of them have this call-card mechanic to determine a random partner: 500, Briscola Chiamata, French Tarot, and Sheepshead.

I really, really like how Doppelkopf establishes random partnerships. The players who hold the third- and fourth-highest trumps become partners. There's a short but clever bidding round to deal with the player who ends up with both of these cards in their hand -- you still need a partner to have a chance at winning a round even if dealt these two high trump cards. David Parlett's Good Cop, Bad Cop has a similar mechanic; two jokers are added to the deck; they player who hold the jokers are partners. There will be two undealt cards; the jokers represent these cards. I can't think of any other game that uses this mechanic to set partnerships.

There's also David Parlett's Twyst (4 players) and Squint (5 players). In both cases, players simultaneously choose a card from their hand that represents their bid. Depending on the cards that all players play, a contract is determined. The game sounded awesome, but when we played Squint, the contract usually ended up a solo one, one player against all four. Rarely would we have a 2-against-3 contract. I'll get to my theory why in the next section, Chosen Partnerships.

I finally had the chance to play again Whist à la Couleur or Belgian Whist. A player may propose a trump suit and another player can accept that trump suit, thereby forming a partnership with that player. I thought this was a cool idea -- as often in Tarot you can get totally screwed by ending up with a partner with a really bad had. But the game was less interesting or exciting in practice. In most cases, the partnership that chose the trump suit made their contract. I thought it was too powerful to be able to choose a partner like this. Perhaps Solo Whist ameliorates this as you're only allowed to pick a partner this way if you're going to pick hearts as trump.

After playing Whist à la Couleur, I appreciated the random partnership mechanic even more! I realized that when you're bidding in Tarot for a random partner, you should have a hand that could win regardless of your eventual partner's strength as simply having one other player not against you is powerful enough! In Squint, because bidding is simultaneous, if you have a pretty good suit for trumps, then it's most likely that you're the only one who's going to bid that. And you have the opposite extreme for Whist à la Couler. If you propose a trump suit and someone else accepts, that someone else is actually too good for you and the round won't be as tactically interesting.

One trick-taking game that does chosen partnerships really, really well is Mü. After partnerships have been determined through the auction round, both teams choose which cards belong to the trump suit. That effectively balances the advantage of being able to pick whose partnership you're on.

Establishing the game to played and the partnerships
Starting with forehand, each player, in turn, proposes one of the following eight games; you cannot pass:

If it's your turn to propose and no one proposed any of the games you made previously, then you must propose a game you haven't proposed before.

A player may still propose a game you proposed during an earlier turn, which ends the proposal round and establishes the game to be played and the partnerships for that round.

Play
The player after the player who first proposed the game to be played leads the to the first trick. Trick play is the same as Whist or Bridge. 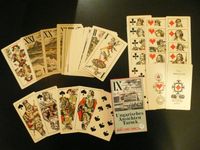 Hungarian Tarokk does it well too by forcing players to take big risks if they want to choose their partners and making it difficult to do, so most of the time, partners are chosen randomly. I think it works great here because the point of Hungarian Tarokk is not to just succeed in your contract but to do crazy difficult tasks, like win all tricks or win the last trick with the lowest trump. And to do these tasks, and to do them relatively often during a game, you sometimes need to be able to choose a strong partner. 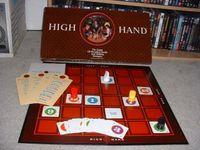 As for other non-tradition card games where players can pick their partners during a bidding round or even during the game? I can't think of any others! 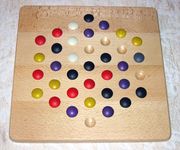 In these games, you score is the sum of the points you made plus those of the player before you in turn order. The only examples I could think of are:

Other kinds of partnerships

A lot of games listed here I haven't played. 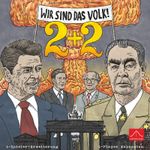 * Pandemic Survival (Pandemic "Duplicate"): A friend played this version at several game conventions and swears that this is the best way to play Pandemic (although I don't know what he thinks of the legacy versions). Partnerships play the exact same game of Pandemic simultaneously; decks of cards are in the same order across all partnerships. The partnership who wins the game first wins the tournament. This sounds like an awesome idea, but I prefer when partnerships play against each other. Also, duplicate games like this often require a lot of setup, and probably require administrators or referees who aren't playing the game.

* Bughouse Chess: Each member of a partnership plays a game of chess simultaneously against another partnership. One member plays white while the other plays black. When a player captures a piece, they give it to their partner, who could place it on any empty square instead of taking a normal turn.

* Between Two Cities: I believe adjacent players are partners, so that means each player belongs to two partnerships.

* Space Cadets: Players in each team play a mini-game. Each game require resources, and it's the role of the captain to distribute these resources to other teammates. Very, very clever idea, but it really felt like multiplayer solitaire, if you're not the captain. I paid attention to no one, except for the captain, during the one time I played it.