Head to Tokyo, and Build an Aquarium Filled with Cute Sea Creatures 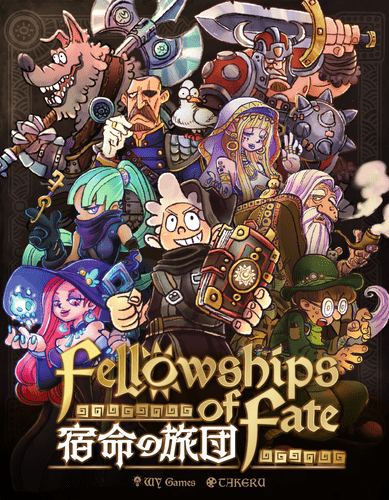 Tokyo Game Market took place on November 14-15, 2020, but I have a couple of dozen browser tabs open and even more emails that I sent to myself about games featured at that show, so let me run through a few more of them in this post, starting with a trio of games from Hobby Japan:

• Fellowships of Fate is a 2-5 player hand- and resource-management game from design group WY Games. Details are somewhat scant, as is often the case with Game Market releases, but here's what we know:
Quote:
In the medieval fantasy-themed card game Fellowships of Fate, you explore the unknown southern island, then defeat various monsters and discover treasures from ancient civilizations.

To do this, you must manage a hand of cards, using them to gain resources, collect adventure cards, and score points. At the end of the adventure, you each compare your journal to see who has performed better. Write the better journal, and you will be the most famous adventurer in the world!

This version of Fellowships of Fate is revised from the 2019 release by WY Games, with Masato Uesugi and Tori Hasegawa participating as advisors. The game system has been adjusted to expand the player count from 3-4 to 2-5. 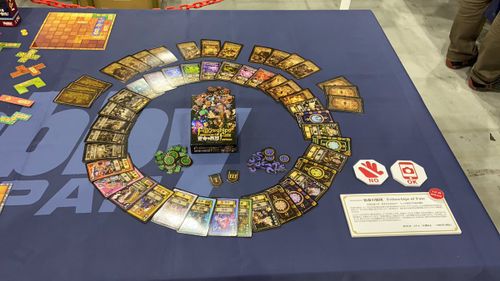 Components on display at Tokyo Game Market; all conventions could use those YES/NO indicators!
• Clockworker is a 2-4 player worker-placement game from designer りかち (rikkati) in which your worker robots operate a factory and gain resources from the abandoned earth. More specifically:
Quote:
A factory has multiple worker spaces, and many robots can go to work in the same batch, but it takes time to gain resources. As a result, you need to manage the timing of how the robots return so that you can develop your technology. In the end, the player with the most victory points wins.
Hobby Japan notes that Clockworker is a revised edition of Planeta Rica, which was released by publisher 四等星 (4tousei) in 2017.

• The final Hobby Japan title is 北斗の拳 世紀末断末魔遊戯 (Fist of the North Star), based on the Viz comic. I know next to nothing about this design for 2-7 players from designers 岡田耕 (Ko Okada) and 田中和彦 (Kazuhiko Tanaka) other than that it's a real-time card-based party game with two game modes. That's something to start with, I suppose. 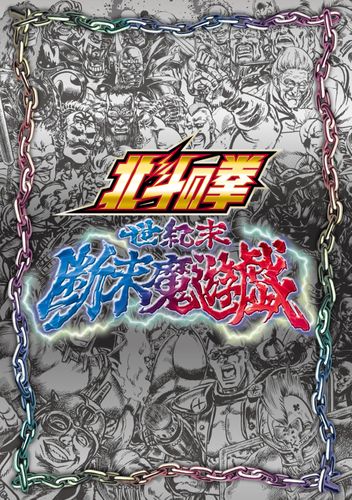 • Rokumon is a 1-2 player game from Charles Ward of EX1ST GAMES. In the two-player game, you play through six acts, and in each act, you take turns adding your tokens to the 6-7 spaces of the board or moving them from one space to another. If you create a line of three tokens or a stack of three tokens or your opponent can't move, then you win the act, with the loser getting a revenge token. 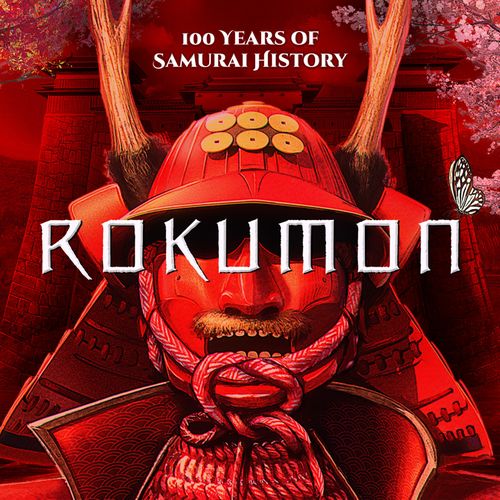 These revenge tokens can be played in later acts when you add a new "fighting" action that allows you to reveal one token from each player to compare values, with the losing token being returned to the reserve. Additionally, spaces of the board can be moved in later acts to allow for more ways to create wins for yourself.

• I'm a sucker for cards with numbers on them, so I had to give a once over to 535, a 2-6 player game by designer かぶきけんいち (Kenichi Kabuki) and publisher Game Nowa that plays as follows:
Quote:
535 is a climbing game that uses a deck of cards 1-15, but with no cards of rank 6 or 10. The deck contains multiple copies of each card, and in addition to a rank, each card has a point value.

On a turn, you can play a higher group of card(s), add to the current group of card(s), or pass. Eligible plays are single cards, sets of the same numbers, and sequences of consecutive cards. For an addition play example, if the current stack shows 2-3-4, the active player could play a 1 and 5 card from their hand to extend the current play to a sequence of 1 through 5. 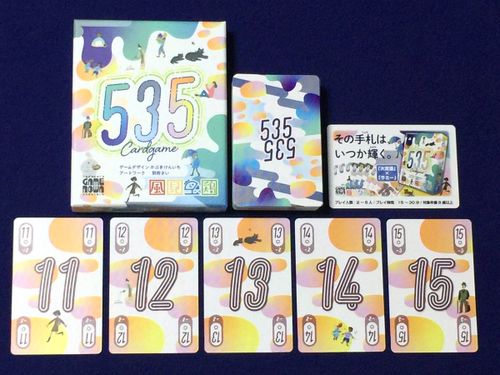 As promised, cards with numbers on them!
Certain patterns, such as four cards of the same number, end the current run, then a new round begins. Once one player is out of cards, the other players score negative points based upon the cards left in their hands. The game ends once one player has lost 20 or more points, then the player(s) with the most points wins. 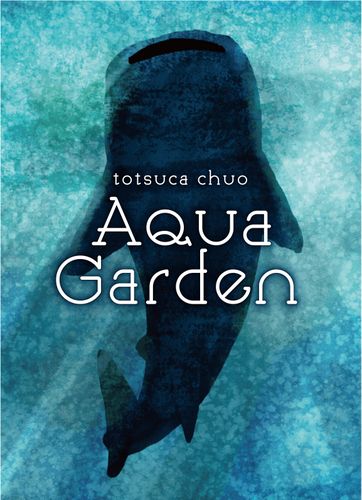 • Let's close with a Japanese design that wasn't on display at Game Market, but is instead being Kickstarted for release in Q3 2021.

Aqua Garden is a 2-4 player design from totsuca chuo and uchibacoya, the latter being both a board game store and a publisher. In the game, you're the owner of an aquarium and want to stock its six tanks with a variety of sea life, but you have a limited amount of funds and only one employee on hand to place the fish in the tanks. In more detail:
Quote:
A game lasts 3-4 rounds depending on the number of players. You have your own aquarium board with six tanks, and a shared player board has sea creatures placed at random on its perimeter. Seaweed and coral tokens are placed on the separate sea board, along with five random sea creatures.

During a round, whoever is farthest back on the perimeter of the shared board takes the next turn, moving their owner as many spaces as they want to an empty space, then taking the action of that space. If you stop on an advertising space, you receive funds based on what's currently in your tanks. If you stop on a sea creature space, you take them all, move your single employee 1-3 spaces clockwise on your aquarium board, then place the creatures in one or both tanks adjacent to the employee. (If the employee passes the feeding event card you were randomly dealt at the start of the game, then you receive funds from the bank based on how well the creatures in the two tanks next to the feeding event card match that card.)

Each tank has only 4 units of oxygen available, so you can't add creatures to a tank that would consume more oxygen than this. You can add one seaweed to each tank, however, to increase the available oxygen to 6. You must also observe other placement restrictions, such as keeping sharks separate from fish and sea turtles. Additionally, you can pay to purchase creatures, seaweed, and coral from the sea board. 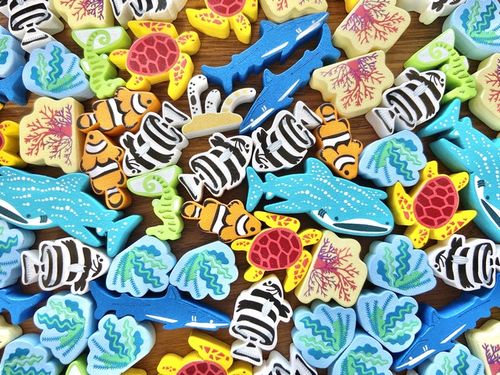 If during your turn, the contents of one or more of your tanks matches one of the four randomized milestones on display, you mark the highest empty space on that milestone with a token. The first player to achieve each milestone receives a related creature that they can place in any tank.

If you've circled the board, you wait for other players to finish, then start a new round, with players moving out in the order that they arrived. After the game ends, players score points for the milestones achieved, funds remaining, order in which they finished, and the sets of creatures they've collected in each tank.

Aqua Garden includes manta rays, remoras, and flapjack octopuses that can be added to play to create new scoring opportunities.