Roll-and-Write Your Way Through Pumpkin Patches, Lost Cities, and Switzerland 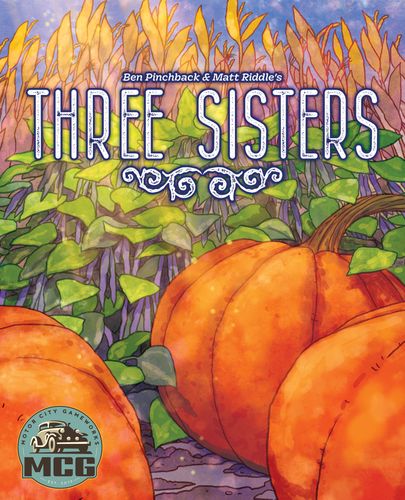 • Designers Ben Pinchback and Matt Riddle have worked together for years, and now they're releasing a game through their own publishing brand: Motor City Gameworks, which they started with designer Adam Hill (Godspeed).

For MCG's first release, Pinchback and Riddle have the roll-and-write game Three Sisters, which is named after a farming technique used by indigenous groups in North America. To crib from the game description, pumpkin, corn, and beans are planted close together to benefit one another. Corn provides a lattice for beans to climb, the beans bring nitrogen from the air into the soil, and the squash provides a natural mulch ground cover to reduce weeds and keep pests away.

As for the 1-4 player game, which is being Kickstarted through April 1, 2021 ahead of a Q4 2021 release date, here's an overview of how to play:
Quote:
In the game, you have your own player sheet with multiple areas: the garden, which is divided into six numbered zones, each containing the three crop types; the apiary; compost; perennials; goods; fruit; and the shed, which is filled with tools that have special abilities. All the crops, fruits, flowers, and hives are represented by tracks that you will mark off as you acquire these items. Many of the tracks are interconnected with other elements in the game, giving you bonuses along the way. A common feature of these tracks are circles that represent a harvest, which generates goods; get enough goods, and you unlock bonus actions. Advancing on all of these tracks offers various amounts of points, advancements, and bonuses.

The game is lasts eight rounds. Each round, roll dice based on the number of players, group them by number, then place them on an action space of the circular action wheel, starting with the current position of the farmer; the farmer moves each round, which means that dice showing 1s, 2s, etc. will end up on different spaces each round. Once the dice have been placed, each player drafts one die and uses it as described below. Once everyone has drafted a die, all players get to use the lowest-valued die remaining on the action wheel. A die lets you do two things, which you can do in either order:

—Plant or water the numbered zone matching the value of the die.
—Take the action of the space from which you removed the die. 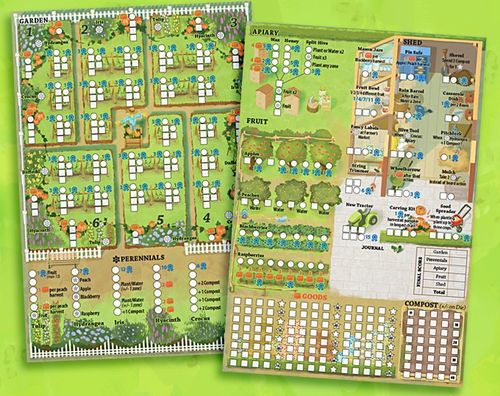 The double-sided player sheet
To plant, you mark the bottom space of two empty crop tracks. (Note that you can't plant beans until the corn adjacent to the beans is tall enough to support them.) To water, you mark one space in all the crop tracks that already have at least one mark in them. As for the actions on the action wheel, you can:

—Plant or water again in the same numbered zone.
—Gain one compost (which lets you adjust die values) and four goods (which will get you bonuses at the farmer's market).
—Mark the hive track, which can bring you points, goods, or bonus actions.
—Mark one of the four fruit tracks. Each fruit is worth different points and different amounts of goods and has different track lengths and circle positions.
—Visit the farmer's market, which gives you points and bonuses based on the number of goods you've collected.
—Mark one of the fifteen tool tracks in your shed. As soon as you complete a track, you gain that power or end-game scoring opportunity.

Perennials don't have a direct action associated with them and are marked off only through actions in other areas, with the various perennials giving different bonuses as you mark them.

At the end of the round, all players receive a bonus action, either rain that waters all numbered zones in your garden, a trip to the shed, or a visit to the farmer's market. After eight rounds, you score points for harvested crops, perennials, the apiary, fruit, and some shed items. Whoever has the most points wins.

Three Sisters has a solo mode in which you try to top your own score against an "opponent" that drafts dice and blocks areas of your sheet. 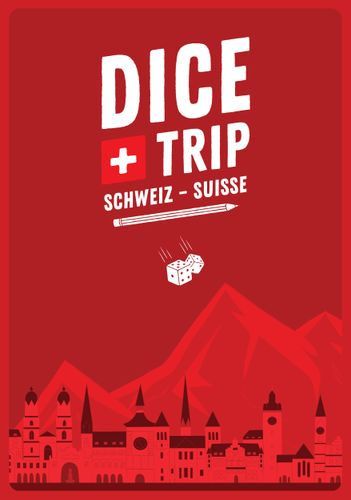 • Dice Trip: Switzerland from Hartmut Kommerell and Swiss publisher Helvetiq is a roll-and-write game in the vein of Hisashi Hayashi's Rolling Japan — that is, a game in which all players use the same dice roll to mark off spaces on their individual player sheet with the game system possibly being applicable to multiple maps. (BGG users have already uploaded maps for dice trips in Germany and Italty, for example.)

Here's a rundown of how to play the game:
Quote:
Travel the country in Dice Trip: Switzerland, ideally hitting as many cities as possible while dressing in the right colors.

In the game, you take a map of Switzerland that shows 25 cities, with each city being connected to a few others by dashed lines and with eight of them being colored in one of four colors; these colors match the colors of the four dice in the game.

You can write each two-digit combination (11, 12, 13, 14, 15, 16, 21, 22, etc.) only once, marking them off on the bottom of the sheet as the turns pass. If you can't mark off one or two cities based on the die results, then you must place an X through one or two cities. You have two special powers you can use once each game: re-rolling 1-4 dice when you're the active roller, and re-using a digit on one die in each of the two-digit numbers you create that turn. 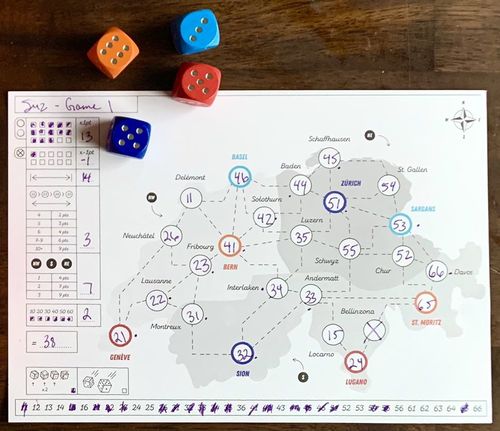 Image by Suzanne Sheldon; cropped from the original with her permission
After thirteen turns, the game ends. You score 1 point for each marked bonus box and -1 point for each X. If you have four or more cities in consecutive order, e.g., 15, 16, 21, 22, 23, then you score 2-9 points based on the length of the chain. You also identify your longest chain of non-X cities that are in increasing order and score 1 point for each city. Finally, you score 0-9 points based on how many of the three zones have no Xed cities. Whoever has the highest score wins. 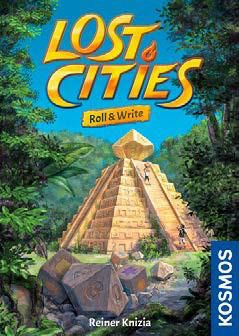 • Reiner Knizia has transformed his Lost Cities game system yet again with the release of Lost Cities: Roll & Write, due out in March 2021 from German publisher KOSMOS and in May 2021 in North America from Thames & Kosmos.

As is standard for a Knizia spin-off title, you'll recognize elements of the original game in the details of how to play this one:
Quote:
In Lost Cities: Roll & Write, each player has their own score sheet, which has eight columns on it: six colored columns matching the colors of Lost Cities (red/orange/yellow/green/blue/purple), an artefact column, and a dice column. You will fill or mark all of these columns from the bottom up.

On a turn as the active player, you roll the six dice — three six-sided color dice and three ten-sided dice numbered 0-9 — then choose one number die and one color die, then mark this number in this color column on your sheet. If you choose 0 and haven't started this color column, you can mark the "double point" circle at the bottom of the column. If you choose a non-0 number and haven't started this column, you write the number in the bottommost space of the column; if you have started this column, then you can add another number to this column only if it's the same value or higher. (A 0 is written as 10 in a column.) Other players choose a number die and a color die from the two of each that remain, then mark one of their columns in a similar manner.

If you place a number on an arrow in a column, then you can "accelerate" any color column by filling the bottommost empty space with the same number currently at the top of that column. If you write over another arrow, then you accelerate once again! If you place a number on an artefact box, then you mark off a space in the artefact column. If you've filled all nine spaces in a column and can write a number there once again, you instead mark off an artefact.

If you wish, you can refuse to choose a number-color combination. If you do, then you mark off a die in the dice column. 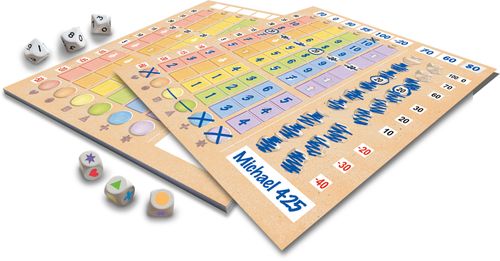 If you mark off the ninth space in the dice column, you are considered to be "exhausted", but you continue to play. The game ends after the turn in which all players are exhausted or all eight bridges have been crossed. Players then score points for each color column based on the number of spaces they've filled, doubling this score — whether positive or negative — if they've marked the "double point" circle at the bottom of the column. Players also score points for the number of spaces marked in the artefact and dice columns, but if you're exhausted, then you score 0 points for that column. Add your bridge bonus points to the sum of these eight columns, and whoever has the highest score wins.