Fend Off Llamas with Dice, and Assemble Alien Teams in Silence 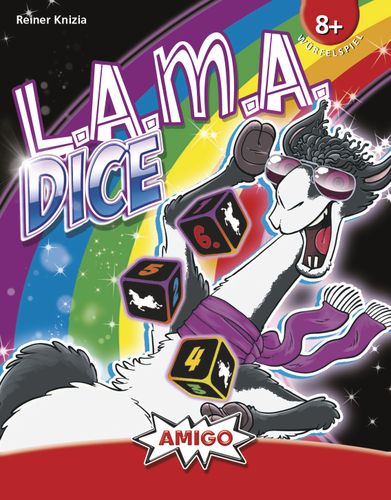 • In December 2020, I shared a teaser image from German publisher AMIGO about its early 2021 releases. Now more info is available on these games, so let's check them out in more detail, starting with LAMA Dice, a follow-up to the Spiel des Jahres-nominated card game LAMA from designer Reiner Knizia.

If you're familiar with LAMA, then much of LAMA Dice will be familiar as well since Knizia maintains game design elements in spinoff titles both to give people more of what they enjoyed in the first place and to make the game easier to learn and play since the new design builds on what you already know about the original.

Here's an overview of this 2-6 player game, which like all of the AMIGO releases is due out in January 2021:
Quote:
With the right roll of the dice in LAMA Dice, you can rid yourself of number cards — but you'll need to quit at the right time before you possibly bomb out and collect a lot of minus points. You can possibly ditch these points later, but you'll need the perfect number roll or triple llama luck.

In more detail, the game lasts a number of rounds, and at the start of each round you lay out the seven "black-backed" cards that show a llama and the numbers 1-6 in a "llama row". You're dealt six cards from the deck — which consists of llama cards and cards numbered 1-6 — and you lay those cards in front of you. On a turn, you roll the three dice or quit the round; if you roll the dice, then: 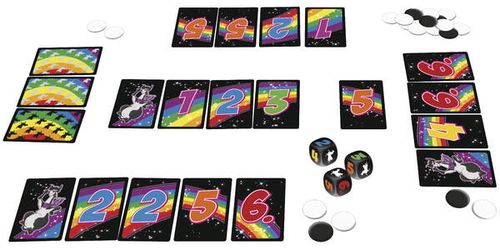 If you quit the round, you turn your remaining cards face down and skip any subsequent turns. The round ends when the llama row is empty, when someone discards their final card, or when all players have quit. (When all but one player have quit, the final player can keep taking turns as long as they like, but if none of the dice match cards in their row, then they automatically bust and take all cards in the llama row.) You then look at the cards remaining in front of you and collect points: 10 points if you have one or more llama cards, and points equal to the card value, with each number card counting only once. If you discarded all of your cards, you can discard a previously collected point token. (Tokens are worth either 1 or 10 points, and you can always swap ten 1s for a 10 token.)

You play multiple rounds until one player has collected 40 or more points, at which time the player with the fewest points wins.

• One of the other original AMIGO releases is Silent Planet, a game by Klaus Altenburger for 2-6 players that plays in 15 minutes. Silent Planet is a co-operative card game that must be played silently, which by chance is the same description as a title that I just covered in this space two days ago.

I'm a fan of these types of designs, and I'm curious to see how this is going to play whenever I can get it to the table. For now, though, you and I will have to make do with this description:
Quote:
In Silent Planet, players are given the task of forming alien teams, but they are not allowed to speak to one another in the vacuum of space, so they can solve this task together only by using their non-verbal communication skills.

In more detail, the deck consists of 55 alien cards numbered 1-5, with more 1s than 2s, more 2s than 3s, etc. The deck also includes nine Xs, which can stand for any number. At the start of the game, you receive a hand of nine cards. Look at those cards, then arrange them in a face-down row on the table in the order of your choice, then reveal as many cards as you wish. These cards are now out of play, but you can (ideally) use them to convey information about what remains hidden in your row. 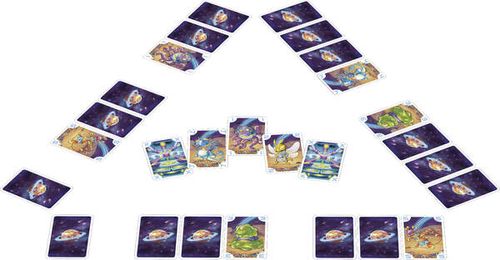 As a group, you are trying to form alien teams that consist of five cards of all five numbers or five cards of only one number. On a turn, all players but one collectively decide — without saying anything, but using any gestures they wish — which face-down card to reveal in the row of the player who is not taking part in the debate. Once this card is revealed, place it in the center of the table. Then the next player in clockwise order sits out while all other players decide which one of their cards to reveal and add to the team currently being formed.

If a card is added to a team that would break that team — e.g., adding a 3 when the face-up cards are 1 and 1, or adding a 2 when the face-up cards are 1, 2 and 4 — then you remove all face-up cards from play. X cards don't have a locked-in value, so you can consider them whatever value is needed to maintain the validity of a team. If you create a valid team of five cards, great! Put it aside, then start a new team. If you manage to create as many teams as the number of players at the table, you win; if you run out of cards and can't create enough teams, you lose.
• Other titles coming from AMIGO in January 2021 are:

—Wizard: 25 Jahre Jubiläumsedition, a new edition of Ken Fisher's Wizard that like AMIGO's 20th anniversary edition contains six special cards with unique powers, along with metal coins you can use to track bids.
— Fette Beute, this being a German edition of Andy Niggles's Hoarders from Flatlined Games, a game in which you choose and play two role cards each round to collect nuts, steal nuts, and mess with others.
—CLACK! Family, this being a card-based version of Haim Shafir's CLACK!, with players racing to slap and claim cards that match the targets set by rolled dice.
—Artischocken, a German-language edition of Emma Larkins' Abandon All Artichokes, which is a delightfully simple deck-building and -deconstruction game that I covered in depth in April 2020 on the Gamewright version of the game.