Use Sounds for Clues, and Stack Meeples Once Again 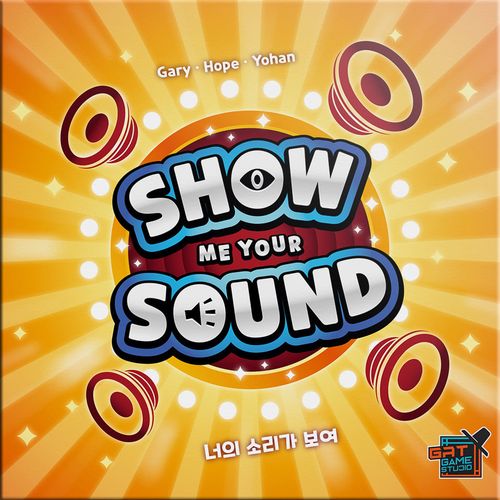 • For this weekend post, let's look at a few party games that will be playable on some other weekend following this one, starting with Show Me Your Sound, the initial title from new publisher GAT Game Studio, founded by Korean designers Gary Kim, Hope S. Hwang, and Yohan Goh.

Here's an overview of this game, the gameplay of which is clear from the description, although I imagine a video demonstration would be far more entertaining:
Quote:
In the co-operative party game Show Me Your Sound for 2-8 players, you listen to a online sound, then give a clue to other players as to whether that sound is more or less related to a certain picture, trying to help them remove the right cards from play.

In more detail, one player is the clue giver, while all others are the guessers. Randomly draw nine picture cards from the deck and place them face up. One of these cards is the "trap" picture, and only the clue giver knows which one.

On a turn, the clue giver plays a sound from their mobile phone or the dedicated website, letting everyone else hear it, then states whether the sound is MORE or LESS related to the trap picture, possibly using a hint tile while doing so. The guessers consult with one another, then flip over a picture card. If the flipped picture was not the trap, the game continues with a new sound for the next turn. Clear all eight pictures and avid the trap to win!

• And if we crossbreed the game above with Similo, we get something along the lines of Platypus, a design from Phil Walker-Harding and Matagot that is also for 2-8 players. Here's an overview:

In Platypus, players co-operate to gradually eliminate bad words in order to find and identify the "platypus" through their adjective cards. To set up, eight common words or proper names — the "platypus" cards — are placed face up in front of all the players. The guides know the card that the explorers must guess, and to help the explorers, they give clues in the form of adjective cards that best define the platypus for them. Each guide has a hand of four clue cards, and after each new clue, the explorers must eliminate one or two cards that they think don't match what's being defined by the clues. If the explorers eliminate the platypus, then everyone loses; if they succeed four times, however, then the platypus will stand alone and everyone wins.
David Harding of Grail Games, brother of the designer, led the play of two demo games during SPIEL.digital 2020 if you want to see Platypus in action:


And since I'm sharing videos already, I will insert the world's all-time best platypus-related video here:

• Another title due out from Matagot in Q3 2021 is Tiny Acrobats, a sequel of sorts to Cédric Millet's Meeple Circus, although the differences in this 2-5 player game are immediately clear from this description:
Quote:
With Tiny Acrobats, you can seize the opportunity to play with your meeples as part of a game! Create an amazing circus show and breathtaking acts and performances by cleverly stacking different wooden meeples. Acrobats, guest stars, special numbers, and wild animals come together in a dexterity game with rules that are easy and quick to learn.

In Tiny Acrobats, which combines the excitement and thrills of Meeple Circus with new rules and streamlined scoring, you have three rounds to create your show and perform numbers that will meet the public demands, which change at the end of each round. 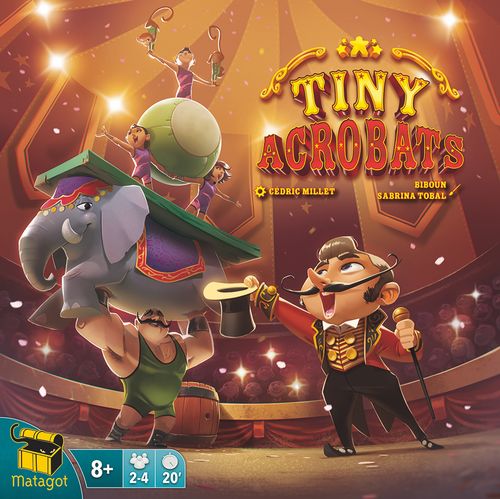 During each round, you select the meeples that you want to add to your troop, then assemble them on stage. Players have a limited time to achieve their prowess simultaneously. Practicing your dexterity, use your meeples to collect applause and earn points. You have to reproduce the figures requested by the public, stage the special arrangements of your guest stars, and raise your troop high in the air because it will bring as much applause as its height. The player with the most applause after three rounds wins.