Knizia Game Round-up: Dig for Gold, Steal from the Family, and Power Your Cauldron 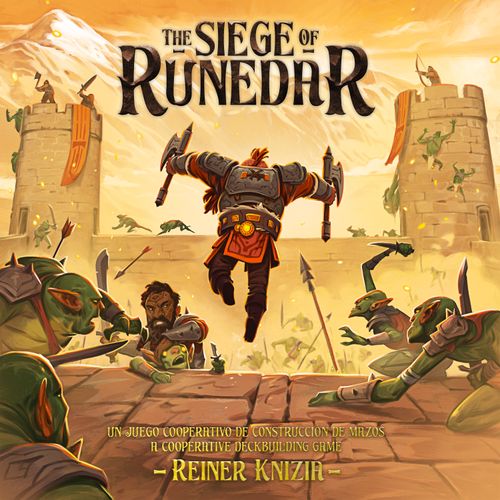 • I've been a fan of two recent releases from designer Reiner Knizia and publisher Ludonova — 2019's Babylonia (write-up here) and 2020's Sumatra (write-up here) — so I'm over the moon to see them working together again, with their next release being The Siege of Runedar, a co-operative deck-building game due out in October 2021.

Here's what we know about the game so far:
Quote:
Since time immemorial, the mines of Runedar have supplied gold to generations of dwarves. Today, only a handful of them remain, guarding the fortress surrounding the entrance to the old, depleted mine... or so it was thought. This group of dwarves have been fortunate enough to accidently stumble upon a new vein of the purest gold and have managed to extract a small treasure. Unfortunately, just as they were about to set off to the safety of the nearest stronghold, they discover that the old fortress of Runedar is surrounded by orcs who are willing to do anything to get their hands on the precious metal. Now, the dwarves not only need to defend the fortress, they also must dig a tunnel under the mountain to escape and get their hard-earned gold to safety.

The Siege of Runedar is a co-operative game for 1-4 players who take on the role of dwarves charged with defending the walls of Runedar and the treasure they keep within. They will have to face orcs, goblins, and trolls, fighting in hand-to-hand combat against those who manage to get past the walls and shooting from a distance at those who try to enter. A deck-building system allows players to upgrade their weapons and tools as they must hold off the raiders long enough to build a tunnel to escape the terrible siege they have been subjected to and get the treasure to safety.

• A new Knizia title on the market now is Family Inc., which was released in February 2021 from Austrian publisher Piatnik. The game has you pressing your luck and stealing from other players along the lines of his 2007 design Cheeky Monkey, but the differences between the two seem bigger than their similarities:
Quote:
Once a year, all family members of the notorious Azzardo family meet in the warehouse of the "Tutti Frutti" seafood restaurant to divide up the stolen goods according to an old family tradition. Everyone can try their luck, but only one will leave the meeting with a full suitcase. Who will prove to be the most skillful player in the hot-blooded game of gamblers, skillfully challenging luck and risk?

At the start of each round in Family Inc., if you have face-up chips in front of you, you score them, advancing your counter on the score board, then removing those chips from the game. Next, you reveal one new chip after another from the middle of the table, placing them face up in front of you.

After each new chip, you decide whether to reveal more chips or whether to end your turn. If you reveal a new chip during your turn that matches one of your face-up chips, your turn ends, collecting only a diamond in compensation if your turn ended after your second or third chip reveal. (If you collect a third diamond, return all your diamonds and score 50 points.) When you end your turn voluntarily, collect all face-up chips from in front of other players that match the values of your chips.

When a player reaches the 100 space on the score track, the game ends and this player wins. 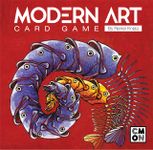 • In December 2020, Japanese publisher Arclight released its version of Modern Art Card Game, which license holder CMON Limited had itself revamped and republished in June 2020.

This design is not new, but I love seeing the different looks that publishers give the game, so here it is: 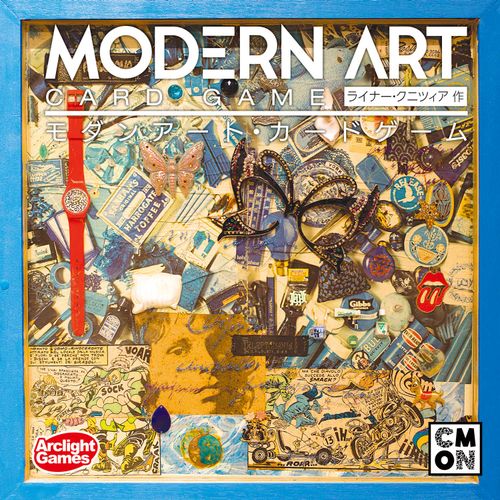 • Witchstone is a 2-4 game co-designed by Knizia and Martino Chiacchiera, with the latter designer noting that he approached Knizia about working together on a prototype that had "something in common with one of his many games I've always appreciated the most". (The game in question would be Ingenious, which should be evident from the description below, assuming you're familiar with it.)

German publisher HUCH! plans to release Witchstone in April 2021, with U.S. partner R&R Games likely to have the game available in late May or early June, according to representative Matt Mariani. Here's an overview of the setting and how to play:
Quote:
As established representatives of your guild, you gather around an ancient sacred stone, the significance and magical powers of which are known to adepts only. Each player occupies one of the four towers around the Witchstone and starts from there. Create your magic spells with the help of your cauldron, and put a network of magic energy around the stone. Send out your witches, scoop the magic crystals out of the cauldron, make use of the pentagram and the magic wand, and keep an eye on the prophecies in order to ensure victory. 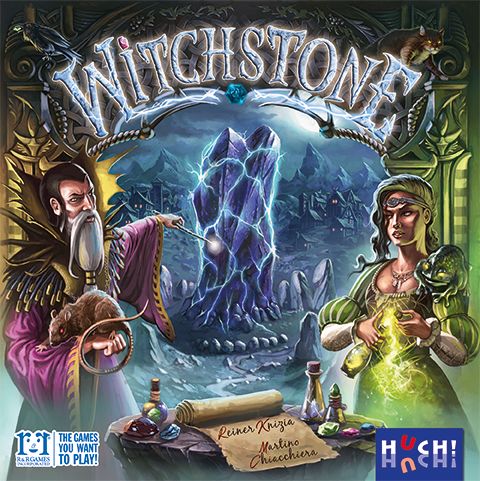 Not all options are always available to you. Only if you cleverly make the most of your opportunities will you have the chance of accumulating the most victory points over the eleven rounds and thereby win Witchstone.

Each player in the game has a personal cauldron that bears seven crystals and six pre-printed magic icons, and they share a larger game board that features a crystal ball that shows the entire landscape. Each player has a set of fifteen domino tiles, with each half of the domino being a hexagon; each domino depicts two different magic icons from the six used in the game. 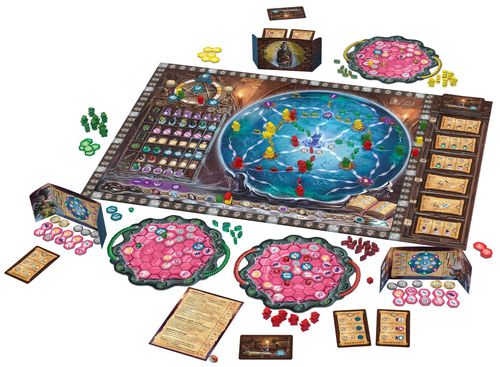 On a turn, you place one of the five face-up dominos in your reserve onto your cauldron, then you take the action associated with each icon depicted on that domino; if the icon is adjacent to other dominos showing the same icon (or the matching pre-printed icon), then you can take that action as many times as the number of icons in that cluster. You must complete the first action completely before taking the second action. With these actions, you can:

—Use energy to connect your starting tower to other locations on the game board, scoring 1, 3 or 6 points depending on the length of the connection.
—Place witches next to your starting tower on the game board or moving them across your energy network to other locations. As you do this, you gain points and possibly additional actions to use the same turn.
—Move your token around a pentagram to collect points and to acquire bonus hex tiles; you can use these tiles immediately for actions or place them in your cauldron to make future tile placement more valuable.
—Move the crystals in your cauldron, whether to make room for future tile placement or to gain bonus actions by ejecting the crystal completely.
—Advance on a magic wand to gain points and take additional actions, with the actions being doubled should you are currently the most advanced player on the wand.
—Claim scroll cards that boost future actions or earn you bonus points at game's end depending on how well you've completed the prophecy depicted.

After eleven rounds, the game ends and players tally their points from prophecies and other collected scoring markers to see who has the highest score.