Throw Planes, Relive Stonewall, and Survive on a Frozen World 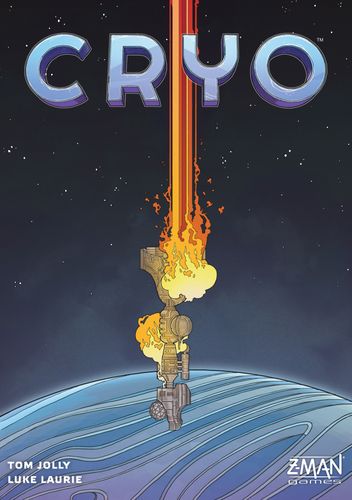 • U.S. publisher Z-Man Games has announced a new title from designers Tom Jolly and Luke Laurie, who had previously worked together on 2016's The Manhattan Project: Energy Empire.

Cryo is a 2-4 player game that takes 60-90 minutes to play and the rest of the evening to recover from its bleakness. Here's an overview:
Quote:
A mission gone wrong. Tensions continued to mount aboard your colony ship as the days dragged on. An anonymous act of sabotage has sent the ship plummeting to the surface of a frozen uncharted planet. Damaged beyond repair, the scattered remains will do little to protect you from the brutal cold.

In the engine-building, worker placement game Cryo, leaders of separate, hostile factions compete to survive and claim control over the underground caverns on a remote icy planet. You need to act quickly and strategically to avoid further sabotage from other factions. Send drones out from your engineering platform to scavenge resources and save your crew still in cryostasis. Gather different materials to upgrade and customize your platform, fine-tuning new actions to suit your individual strategy. Utilize multi-use cards to your advantage, and claim the underground caverns for your faction to survive.

Though unplanned, a new chapter for humanity has begun. Scavenge, build, explore, and lead your faction to victory within this frozen world before the sun sets! 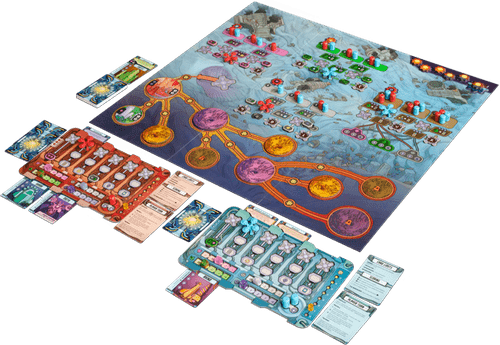 Z-Man Games has already posted English rules (PDF) for Cryo, and when it announced the game, it noted that it's "working on creating a digital version so you'll soon be able to try out the gameplay". Sounds like the thing to do right now, and I can imagine digital samplers becoming a regular thing in the future given how crowded the market is.

• California-based Taylor Shuss is a new game designer who has two titles in the offing. The Great Airplane Race is coming from his own Updraft Games in 2022, and it might be stretching the definition of "tabletop games" to include this title on BGG, but I love games that stretch definitions, so here we go:
Quote:
The Great Airplane Race is a short family-style game for 2-50 players.

If your plane crosses the finish line, you win instantly; otherwise whoever has gotten closest to the finish line after five rounds wins.
And here is the game being playtested at AEG's Larkstone house in 2019:

• The other title from Shuss is Stonewall Uprising: The Fight for Gay Civil Rights, which U.S. publisher Catastrophe Games announced via Twitter in early February 2021:

Catastrophe Games is proud to announce we have contracted with Taylor Shuss for his game "Stonewall Uprising: The Fight for Gay Civil Rights." Played across 3 decades: 60s, 70s, 80s, this game portrays the key people and events of the times in a struggle for public acceptance. pic.twitter.com/cNNVjM61Kq 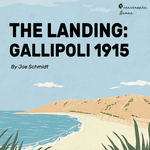 • Catastrophe Games launched in 2020 with Joe Schmidt's The Landing: Gallipoli 1915, this being an updated version of his self-published Anzac Cove from 2019. Here's a summary:
Quote:
The Landing: Gallipoli 1915 is a narrative solitaire wargame that tells the story of the Australian and New Zealand Army Corps (Anzacs) and the landing on the beaches of Gallipoli in the early morning of April 25th, 1915.

Using a combination of card-driven gameplay and action economy, you must lead your fellow Aussies and work together with your Kiwi and Indian allies in the desperate fight to take and hold the heights. Victory conditions in the game are simple. You must occupy and control the Third Ridge (7th Map Card) by the end of the Dusk Round. If you do, then you are victorious. Anything less is a loss and will result in a descent into the horrors of trench warfare.
• And Catastrophe's second title — Robin David's Judean Hammer — is heading to Kickstarter in early 2021. An overview:
Quote:
Judean Hammer is a fast-playing tense struggle between the rebel player (The Maccabeans) and the empire player (The Seleucid Greeks) trying to re-assert their control. This two-player game plays in about an hour or two, with a lightning fast set-up time. The Greeks start in their unassailable supply centers, controlling Jerusalem, but the Maccabeans can use ambushes to whittle their foe while cutting off the Greek supply. 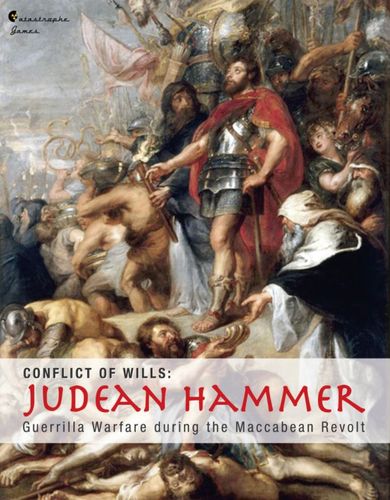 At the heart of the game you strive for control of critical cities in the region, especially Jerusalem, playing cards to move or recruit units or to use a special ability that benefits only your faction. However, there's only one deck, and the more special ability cards you play, the weaker your side becomes in combat — which leaves you to make tough decisions at almost every play: Do you push for an early advantage, capturing critical regions and amassing a victory point advantage? Or do you bide your time, watching your opponent weaken themselves, then strike hard at the end to steal the win?