Race Through Whirlpools in Greece, and Escape the Chains of Sleep 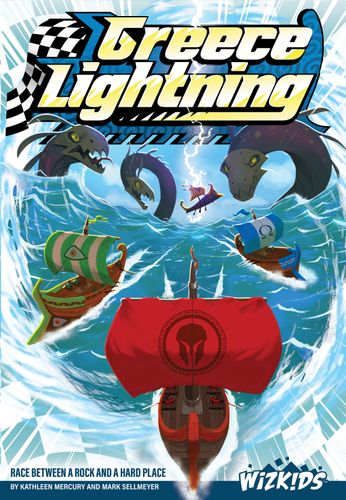 Greece Lightning feels like it's attempting to win a "dad joke" competition, while also describing the action in this 2-4 player racing game from Kathleen Mercury and Mark Sellmeyer that WizKids will release in June 2021.

Here's a detailed overview of the setting and gameplay:
Quote:
On your mark! Get set! ROW! You are the captain of a sleek, speedy trireme, racing in the famous Hydra Regatta. Steer around whirlpools, shifting currents, and fickle gods. Avoid the hungry hydra to win a place among the stars!

In Greece Lightning, you race around a circular track, trying to be the first to complete two laps. On a turn, you roll two dice to move your boat: a navigation die (1-3) and a movement die (1-6). You can roll a second movement die to try to go farther, but if the roll is lower than your first movement die, you bust and keep only your navigation die.

The circular track is comprised of twelve wedges, with the wedges being randomized each game. In general, the track consists of four paths orbiting the central hydra, but these paths criss-cross a lot, with movement dots and bonus icons at various spots on the movement paths. When you move, you must move clockwise a number of spaces equal to the sum of your dice, but you often have freedom to weave from one path to another. Here are the icons you might encounter:

—Fish: Collect one fish. You can have up to three fish on hand, and you can spend a fish to re-roll your navigation die or second movement die. You might also need fish to navigate whirlpools.
—Favor of the Gods: Draw a favor card, and place it face down before you. At the end of your turn, reveal the card and use it immediately, save it for later, or give it away, depending on what card it is.
—Track wedges: Collect one wedge and place it face up before you. At the start of your next turn, after determining your total movement, place the wedge on the game board (but not on the starting tile or a player's ship). Use these to make your path easier or to place a hydra directly in your opponents' way. 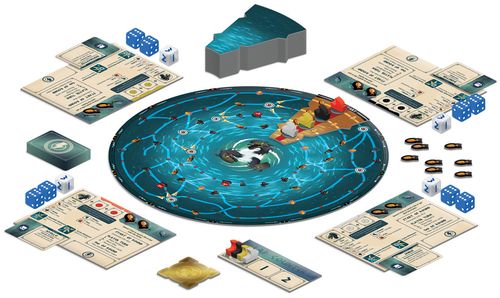 —Whirlpool: When you land on a whirlpool, you often have multiple exit paths from it — but you might need to pay fish or have a die with a certain number in order to take a particular path.
—Hydra: Spend a fish when you land on a hydra space or else your movement will vanish for the rest of the turn as you must fight it off.

When you land on or cross the starting line, thereby finishing one lap, you receive a fish, a wedge, and a Favor of the Gods card. When someone has completed their second lap, you finish the round to ensure everyone has the same number of turns, then whoever has gone the farthest wins. 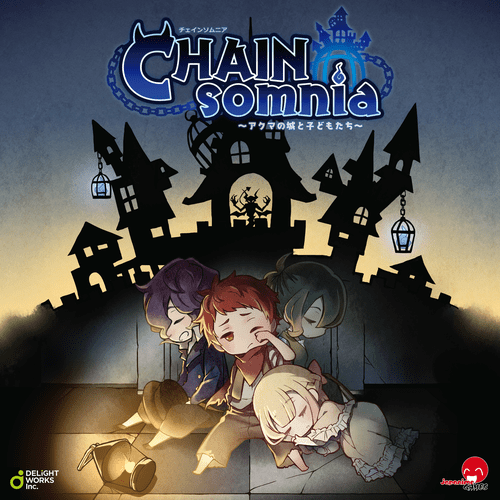 • CHAINsomnia is a design from 青山奨 (Shou Aoyama), 下見幸穂 (Yukio Shimami), and 田谷由壮 (Yuso Taya) first released in Japan in 2018 by DELiGHTWORKS that will be Kickstarted by Japanime Games starting on March 9, 2021 for release later the same year.

Here's an overview of the setting and gameplay in this design for 1-4 players that takes 40-60 minutes to play:
Quote:
In CHAINsomnia, a.k.a. チェインソムニア, sleeping children become trapped in the castle of the demon Akuma and must work with others to escape. If any player is on the "wake up" tile when all "bad dream" cards are removed, they escape and win the game; if all the characters are immobilized by chains or the event cards are exhausted without anyone waking up, then everyone is defeated.

In more detail, you and each other player take a character card and cover two of the six spaces on its "chain gauge". The highest uncovered number on this gauge shows how many action points (AP) you have available on your turn, and each character has a unique skill, in addition to values for strength, wisdom, and luck. All characters start on the central tile, with the "wake up" tile being placed at the bottom of the room tile deck. On a turn, you use your AP to take actions from the following list, repeating actions as desired: 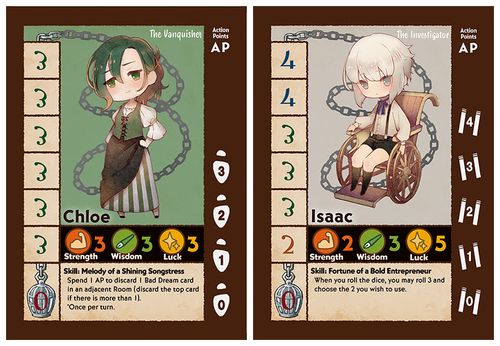 As chains are added to or removed from your character card, your AP count might change. If all six spaces on your chain gauge are covered, you're immobilized and can spend no AP on your turn. If a "bad dream" is placed in a room, no character can enter that room, although you might be able to remove it through various skills, items, or events; if a "Bad dream" ends up in your room, then you're trapped in that dream and cannot move until you or someone else can dissolve that dream.

After all players take their actions, the demon acts, initially with only one event card, but as the game progresses and shrieks are added to the table, more event cards are drawn for each demon turn.

If all the bad dreams have been vanquished and a player is on the "wake up" tile — which will be drawn only after sixteen room tiles in a game of normal difficulty — then you all win, with everyone awakening from the demon's clutches. Otherwise you will sleep forever...