Battle for Supremacy in Medieval India, Survive in Malta, Race to Moscow, and Airdrop into the Last Hundred Yards 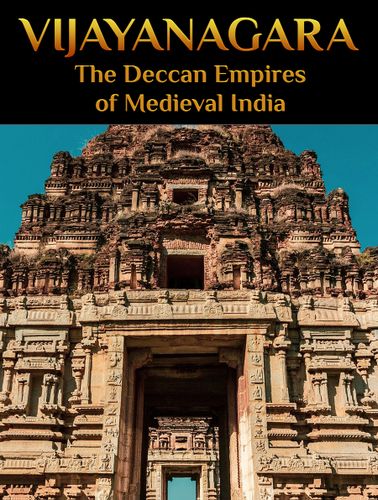 P500 box cover (not final)
• In March 2021, renowned wargame publisher GMT Games announced the kickoff of its new Irregular Conflicts Series and the upcoming first release in the series: Vijayanagara: The Deccan Empires of Medieval India, 1290-1398, by designers Cory Graham, Mathieu Johnson, Aman Matthews, and Saverio Spagnolie, with this title being a new addition to GMT's P500 pre-order system.

Vijayanagara sets 1-3 players in medieval Indian history, competing as asymmetric factions in 60-120 minutes as described by the publisher like this:
Quote:
Vijayanagara depicts the epic, century-long rise and fall of medieval kingdoms in India over two dynastic periods. With gameplay inspired by GMT's COIN system, players take on the asymmetric roles of the Delhi Sultanate, the Bahmani Kingdom, and the Vijayanagara Empire, navigating event cards and unique action menus as they contest to write themselves into medieval Indian history. Players will rally local amirs and rajas to their cause; construct epic temples, forts, and qasbahs; and battle for supremacy over the Deccan Plateau.

Vijayanagara is intended for players new to asymmetric wargames and veteran COIN players alike. The factions have distinct capabilities, and each is faced with different strategic decisions, offering a very high degree of replayability. The game is streamlined; all player actions and most rules are visible on the table on player aids and cards.

Gameplay and turn order is organized around a deck of unique event cards. With each new card, factions have the option to carry out the event or to select from faction-specific commands and special decrees: commands such as the conscription of new troops, governing in tributary provinces, and migration to begin life anew, and decrees ranging from demanding tribute, conspiring with Delhi's governors to betray the Sultan, and forming new alliances with minor regional powers.
COIN Series developer Jason Carr posted an excellent article with details on GMT's new Irregular Conflicts Series and it's worth checking out.

• The Old School Wargames wing of Worthington Publishing continues to rejuvenate older games from Victory Points Games' "States of Siege" series. I mentioned the upcoming releases of new, deluxe editions of John Welch's Keep Up The Fire! and Darin A. Leviloff's Soviet Dawn in a February 2021 post, and next on deck is Malta Besieged: 1940-1942 Deluxe Edition from designer Steve Carey, which is on Kickstarter until April 5, 2021 (KS link).

Here's an overview of this game that was originally released in 2011 and that plays in 75 minutes:
Quote:
Malta Besieged is a solitaire World War II game covering mid-1940 through 1942 in the often overlooked Battle for the Mediterranean. You are placed in the role of the Commonwealth Commander in the theater and must utilize every resource at your disposal to fend off unrelenting Axis attacks in order to ensure the survival of the island of Malta.

Built upon the same States of Siege engine as the designer's previous 2010 Charles S. Roberts award-winning release We Must Tell the Emperor, Malta Besieged features both familiar and innovative gameplay. Supply was the key element in the Mediterranean Campaign, and so it is here as well. Players have to safely shepherd vulnerable convoys — and their valuable cargoes — in order to effectively wage war. With the ability to trade supply for extra actions at the most crucial moments, this places an additional emphasis on that precious resource and also creates extremely tense convoy battles which will resolve as the game progresses.

ULTRA is a crucial asset in the game, but beware of Axis counterintelligence! Spitfires can rule the skies, Gibraltar can block U-Boat advances, Operation Herkules is a constant threat, and Admiral Cunningham himself can intervene on occasion. 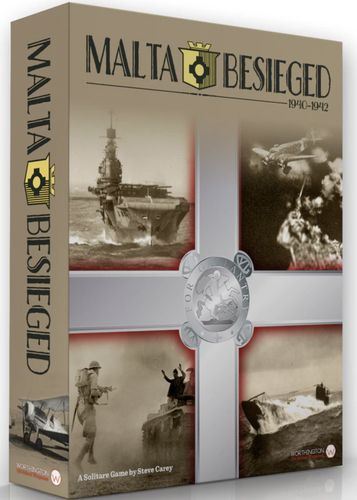 Protoype deluxe edition box from Kickstarter
North Africa is not treated as a mere sideshow; indeed, the struggle with Rommel, the "Desert Fox", holds the ultimate key to victory...if Malta can hold out against the constant pressure. If a fortified Tobruk manages to stubbornly delay the vaunted Afrika Korps long enough, then General Montgomery and his battle-tested 8th Army can possibly make a final dash from El Alamein to capture Tripoli and secure a glorious triumph.

Raiding Axis supply lines to weaken Rommel's situation, scrambling Hurricanes to provide air support for inbound shipping, attacking the Italians early before the dreaded Luftwaffe arrives, requesting British Fleet escort for your individually named convoys, and maintaining the morale of a battered Malta are just some of the important decisions to be made throughout the game. Numerous theater-wide events such as The Fall of France, O'Connor's desert offensive, the daring raid on the Italian Fleet at Taranto, the Air Assault on Crete, the evacuation from Greece, the sinking of the aircraft carrier Ark Royal, and the Torch landings are all abstracted via card play and can have a significant impact on the overall conduct of the war. 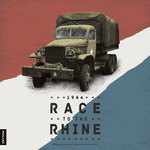 • After a successful Kickstarter campaign in November 2019, Waldek Gumienny's 1941: Race to Moscow from UK publisher PHALANX is available for retail pre-order.

1941: Race to Moscow reimplements Jaro Andruszkiewicz and Gumienny's 2014 release 1944: Race to the Rhine, in addition to being a prequel to it. In the game, 1-4 players compete to manage their logistics better than their opponents to get to Moscow. In more detail from the publisher:
Quote:
You lie in a cot, tossing and turning, trying to doze off after a 36-hour shift of non-stop hustle and bustle. Orchestrating the deployment of trains with 450 barrels of tank fuel to Proskurov as well as supervising the dispatch of two truck convoys to Odessa, loaded with ammo crates and food supplies, have taken a toll on your appearance. Your haggard, eye-bagged face has acquired yet another trait — a streak of gray hair on your left temple. And the news from Army Group Center, boasting that their tank divisions are already halfway there! Their quartermaster simply cannot be that good!

Your pondering whether it would be right to take a leave of absence is interrupted by a private carrying a message from headquarters: Your request for the additional supply of ammunition has been rejected. You dismiss the private with an angry snarl. What are you supposed to resupply the 6th and 17th army with now? Wheat and onions instead of bullets and grenades? You have to figure something out really soon as your comrades rely on your ingenuity. Your failure means their race to Moscow is over. 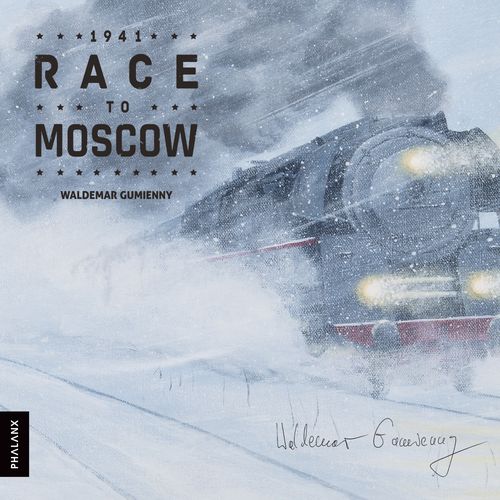 1941: Race to Moscow is a game of logistical resourcefulness as well as relentless competitiveness. You assume roles of quartermasters bound to enable your armies to advance eastward and reach their destination points before armies of your opponents do. The road to Moscow is not paved with roses, though. The sticky hell of mud that brings your tank charge to a halt, enemy forces whose defeat will cost you not only the last bullet left in your clip but also the last droplet of fuel left in your gas tank, tactical dilemmas and meticulous calculations of how to reroute the completely stuck railroads — all of this and much more awaits you on the plains and steppes of western Russia. Not to mention the unmistakable feeling of your nails bitten to the quick when your troops are just a hop, skip, and a jump from their destination and all of a sudden they run out of ammo...

Experience tough tactical decisions and take part in the most challenging race of logistics. Do not linger any more: Equip your troops wisely, pave ways for the most efficient supply chains, and prevent your armies from running on empty. Have a blitz on Moscow and have a blast by the hottest game of logistics ever!

In the Operation Overlord campaign, follow the elements of the American 82nd and 101st Divisions beyond the Normandy beachheads. After being scattered over a large area in Normandy on the night of June 6th, they struggle to assemble and secure their objectives to support the advance of the American units landing at Utah Beach. Later missions feature them defending against the inevitable German reaction and counterattack. Follow Lt. Dick Winters as he leads his platoon in taking out the artillery battery at Brecourt Manor near Ste. Marie-du-Mont, then faces a counterattack from elements of Col. Von Der Heydte's 6th Fallschirmjäger Regiment. 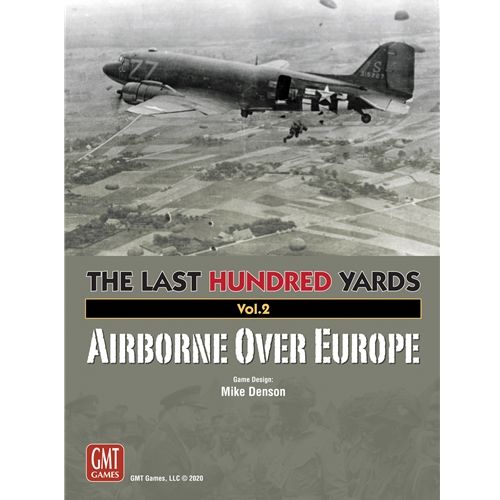 In the Operation Market Garden campaign, follow the 82nd Airborne Division after landing south of Nijmegen in the early afternoon hours of September 17th as they race to secure critical bridges over the Waal and Maas rivers, as well as those over the canal between them. Follow Lt. Foley and his men as they defend Devil's Hill against German counterattacks on the Eiesenborne Ridge Groesbeek Heights, a mere 2-3 miles from the German border.

This game will introduce airdrop and night rules, as well as new terrain to the series. Successfully landing airborne troops at night, assembling them from a dispersed condition, and advancing against unknown enemy resistance to secure your objectives will prove a thrilling challenge in this new game.

Note: This is a standalone game and does NOT require ownership of The Last Hundred Yards to be played.
...and if you're ready for even more, The Last Hundred Yards Vol. 3: The Solomon Islands is currently available for P500 pre-order at GMT, with this item offering new campaign missions in the jungle as described below by the publisher:
Quote:
The third game in the Last Hundred Yards Series focuses on the vicious and brutal Solomons Campaign, including actions to control the islands of Guadalcanal, Bougainville, and New Georgia.

When you play the Solomon Islands Campaign missions, you will experience some of the fiercest small unit actions in the Pacific Theater. The game will focus on actions involving the 1st (The Old Breed) and 3rd (Fighting Third) Marine Divisions, as well as the Army's 25th Infantry Division — the unit that finally drove the Japanese off the island, earning them the nickname "Tropic Lightning". 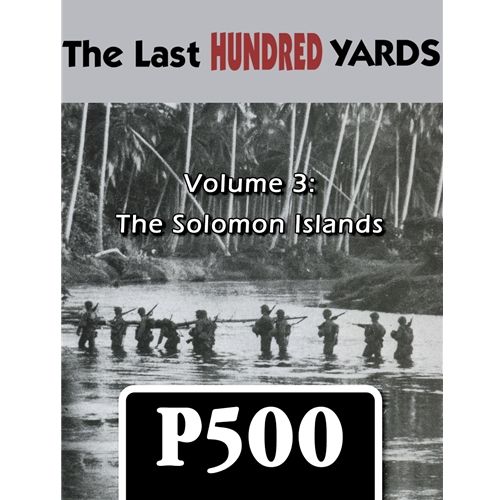 P500 cover (not final)
Take to the jungles of Guadalcanal with the 1st Marine Division as they begin the first ground offensive of the war. Landed onto Guadalcanal and with intermittent naval support as the struggle for naval supremacy raged offshore, the Marines fought tooth and nail to secure their small foothold around Henderson Airfield. They fought against Japanese Reinforcements coming from all over the South Pacific area. Engage in bitter jungle fighting with the 3rd Marine Division as they attempt to hold and expand the beachhead on Bougainville Island against the Imperial Japanese 6th Infantry Division.

Finally, serve with the 25th Infantry Division's famed 27th Regiment, the "Wolfhounds", as they try to reduce Japanese positions on Guadalcanal's Galloping Horse Ridge (an action that is portrayed in the movie "The Thin Red Line"). You will also fight with the Wolfhounds in the jungle around Munda Point for the airfield on New Georgia. Each of these actions involved tense jungle warfare and the routing out of fanatical Japanese units from hidden bunkers and pillboxes. You will understand the nerve-racking frustration of clearing an enemy position, only to have infiltrators attack you yet again from a different direction at night!

This volume introduces new weapons and terrain including flamethrowers, anti-tank halftracks, light and heavy jungle. Each mission will provide new challenges with different elements, forces, and situations encountered, making this volume an exciting and nail-biting addition to The Last Hundred Yard Series.