Let's check out a few more Japanese game releases ahead of the Tokyo Game Market event that will take place on April 10-11, 2021. Not all of these titles will necessarily be available at the show, but in all likelihood not all of my readers will be at the show either, so I guess that makes things even.

I know that sometimes posts like these are frustrating since the games featured won't necessarily be easily available, but I like featuring games that don't look or play like everything else, so I write about them anyway. Besides, the games do turn up sometimes, whether through an importer, a licensed edition, or a shipping service that delivers to your country.

• We'll start with YADOKARICK, a trick-taking game from giraffismus for 1-7 players, with special rules for games with one or two players. As an example of what I described above, YADOKARICK can be purchased via BOOTH, an online consignment shop of sorts that co-ordinates with Buyee to ship goods anywhere in the world.

Here's an overview of the 3+ player game courtesy of JP game fan James Nathan:
Quote:
In YADOKARICK, players try to find the right size shell for their hermit crab from beach detritus.

The game consists of two suits, and in addition to a suit and rank, each card has a "shell size". During the game, the lowest card played to a trick will be able to adjust the target shell size up or down. The highest card of each color played to a trick will take the cards of that color with the largest size and add to their hermit crab. The bodies have a maximum size and may have a "roof" card added. 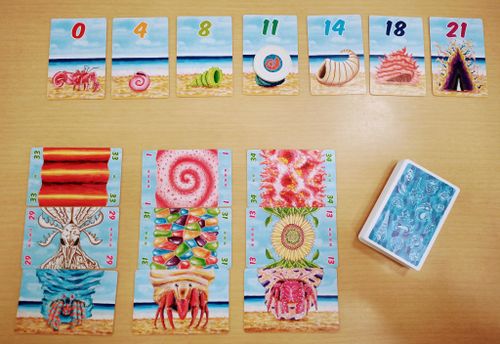 At the end of a hand, positive points are earned for total shell sizes less than or equal to the target, and points are lost for shells that exceed the size or for players who added too many cards to their shell. The player with the most points wins.
• I have few details about 金庫バトル (Safe Battle) from ASOBI.dept, but here's what I do know:
Quote:
In the game, you and your fellow players are master locksmiths who have gathered at a national tournament to open four safes by listening to their sounds. You can try to open them in co-operation with other locksmiths or go for a solo victory by relying solely on your own ears. 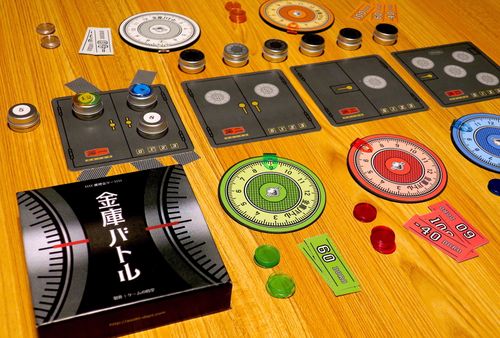 Examine the photo, then decipher the game
• Safe Battle was an Osaka Game Market release in late March 2021 that may or may not show up at TGM, which is also true for You Are Probably Criminal, a.k.a. あなたがたぶん犯人です, from designer Ikagaya and publisher いかが屋楽団Z (How About the Orchestra Z).

This 3-5 player game is about crime, but doesn't seem to be a deduction game. The overview explains why:
Quote:
You and the other players are suspects in a murder case. Heartless as it might sound, who is actually guilty of the crime doesn't matter because in the end all that matters is who is the most suspicious among you! 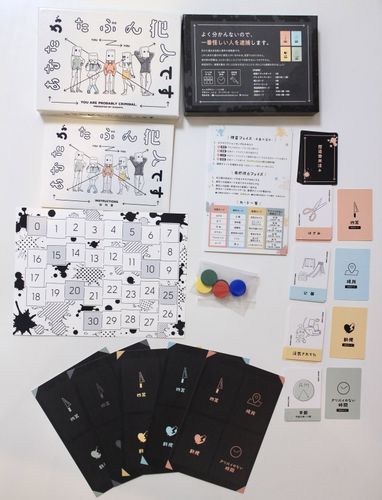 Components
On your turn, you can make a statement based on the confession cards you hold or you can investigate an evidence card by revealing a confession card you hold. If you make a statement that matches the evidence, you'll be more suspicious, so you might prefer to investigate — but the fewer statements you make, the more suspicion points you gain at turn's end, so you can't only investigate. Perhaps you can forge evidence to throw off suspicion?

In the end, the player with the most suspicion points loses the game and is arrested.
• A similar-sounding not-a-deduction deduction game is Catch the Bomber from designer イイダ タカアキ (Iida Takaaki) and publisher Iida Games, but the details of gameplay aren't clear to me from the short description on the TGM site. Here's what I do know:
Quote:
In Catch the Bomber, a.k.a. キャッチザボマー, you are either the lone bomber in the game or part of the police force trying to catch the bomber. For the bomber to win, they must do one of the following:

• Kill civilians with a bomb.
• Escape the city.
• Restrict the actions of citizens and disrupt the economy.

The police want to stop all of this from happening, but the bomber's identity is secret. On a turn, you either play or move, and the resolution of the game isn't complete until the final card has been played.
After I tweeted the captivating cover below, the publisher responded by saying that they need to create an English translation of the rules as soon as possible, so perhaps we'll know more in the future. Until then, imagine this dude staring at you from above your bedframe as you head to sleep at night... 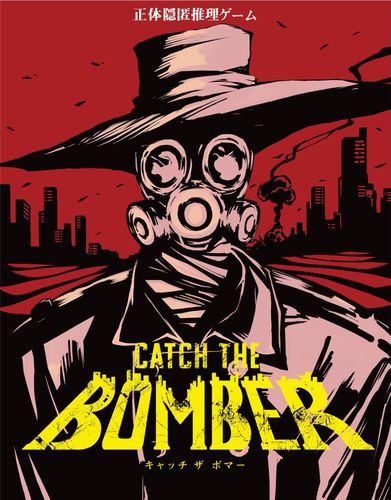