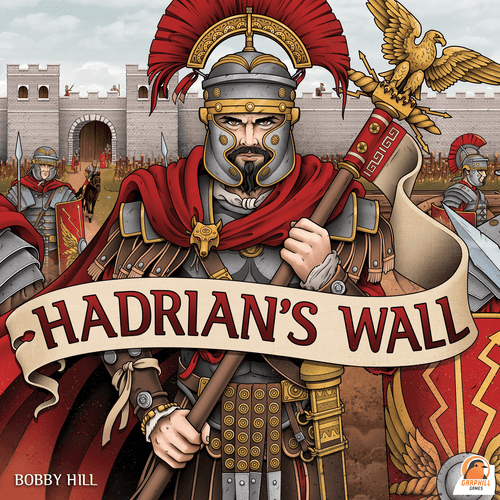 • Most releases from New Zealand publisher Garphill Games are designed or co-designed by owner Shem Phillips, but in a change of pace the company's newest release — Hadrian's Wall — is by Bobby Hill, with this being his first publication credit.

Here's an overview of the game, which is reaching buyers of the Garphill edition in April 2021, and which will be released be Renegade Game Studios in Q2 2021:
Quote:
When visiting the North of Britannia in 122 AD, the Roman Emperor Hadrian Augustus witnessed the aftermath of war between his armies and the savage Picts. In a show of Roman might, he ordered a wall to be built that would separate the Pict tribes from the rest of England. Grand in its design, the wall stretched 80 Roman miles, from coast to coast. Hadrian's Wall stood in service to the Roman Empire for nearly 300 years before its eventual decline. Today, Hadrian's Wall is a UNESCO World Heritage Site and the remains of the forts, towers, and turrets can still be explored.

In Hadrian's Wall, players take on the role of a Roman General placed in charge of the construction of a milecastle and bordering wall. Over six years (rounds), players will construct their fort and wall, man the defenses, and attract civilians by building services and providing entertainment — all while defending the honor of the Roman Empire from the warring Picts. The player who can accumulate the most renown, piety, valor and discipline, whilst avoiding disdain, will prove to the Emperor they are the model Roman citizen and be crowned Legatus Legionis!
While the game is listed as being for 1-6 players, Phillips notes that with multiple copies, you could have any number of people participate in the game because your actions directly affect only your immediate neighbors — although in this age of online gaming, your "immediate" neighbors could be anywhere in the world!

For background on the game, check out Hill's four-part designer blog on the Hadrian's Wall BGG page. 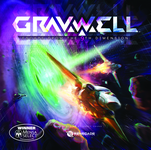 • Speaking of Renegade Game Studios, in June 2021 Renegade will release a new edition of Corey Young's Gravwell, which debuted in 2013 from Cryptozoic Entertainment, then moved to Renegade in 2014.

For those not familiar with this quick-playing, semi-racing game that often feels like a weird tug-of-war with yourself, here's an overview of the game's setting and how to play, followed by notes of a few changes in the new edition:
Quote:
In Gravwell, players command spaceships that have been pulled through a black hole, transporting them into a different dimension. With each ship lacking fuel to get home, each player must collect basic elements from surrounding asteroids, using the gravity of the dimension and what little resources they have in order to reach the warp gate that will take them home. But in this dimension, moving ships will travel towards the nearest object, which is usually another ship, and when those objects are moving either forward or backward, reaching the warp gate isn't always easy. Time is running out to save your crew and your ship! As a grim reminder of the cost of failing to escape, the frozen hulks of dead spacecraft litter the escape route — but with careful card play, you can slingshot past these derelict craft and be the first to escape from the gravwell!

Gravwell uses 26 alphabetized cards to determine movement order and thrust; most cards move your ship towards the nearest object, but a few move you away from it. At the start of each round, players draft fuel cards, picking up three pairs of two cards, with only the top card of each pile being visible; you get some information as to which moves you can expect from the other spaceships, but you won't know which moves you'll be forced to make when you draft your cards! 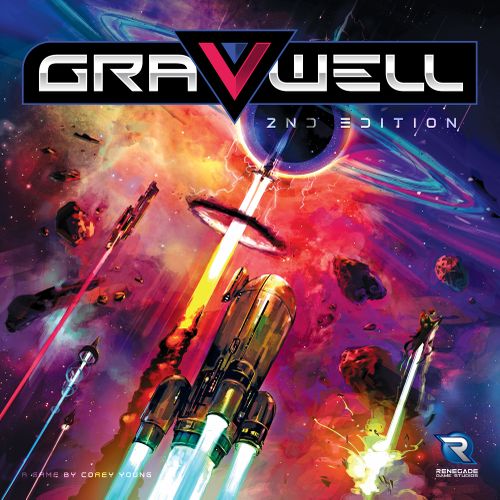 During a round, each player will play all of their fuel cards in the order of their choosing. During each phase of a round, each player chooses one card, then all cards are revealed and resolved in alphabetical order. When your opponents move in ways you didn't expect, you won't always be heading in the direction you thought you would! Each player holds an "Emergency Stop" card that they may tactically play only once per round to avoid such a situation.

Whoever first reaches the warp gate wins, but if no one has escaped after six rounds, then the player who is closest to the gate wins.

Gravwell: 2nd Edition features the same gameplay as earlier editions of the game, but now 40 fuel cards are included, which allows up to six players in the game at the same time. (Earlier editions maxed out at four players.) Additionally, ship ability cards are included that can give a unique power to each ship's captain trying to find their way home.
Oh, hey, I did a video overview of that Cryptozoic edition in March 2014 in case you'd prefer to see examples of the game in action to get a better idea of how it works. Wow, seven years ago — it's like watching someone else present a game at this point...