Visit Every Biome in Subastral, and Empty Your Hand in Aggretsuko: Work/Rage Balance 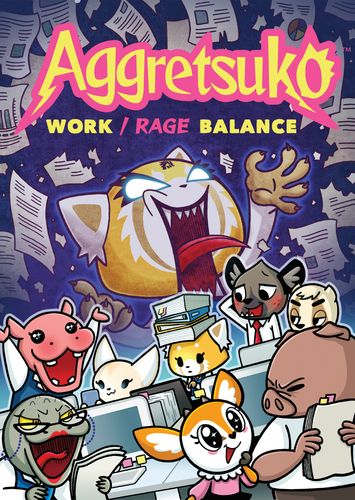 • In 2020 Ben Eisner and Steve Ellis designed Gudetama: The Tricky Egg Card Game for Renegade Game Studios and Oni Games, and in Q2 2021 they'll have another IP-based card game on the market from those same publishers: Aggretsuko: Work/Rage Balance.

Here's an overview of this 3-6 player ladder-climbing card game:
Quote:
Your goal in Aggretsuko: Work/Rage Balance is to get out of work as quickly as possible — that is, to rid yourself of all cards in your hand. The game lasts five workdays (i.e., five rounds), and whoever has the lowest score once the weekend arrives wins.

The deck consists of 86 cards, with two cards each numbered 1-10 in four suits, along with three 11s, two 12s, and one 13. Each player starts with a hand of thirteen cards. The leader of the round plays a combination of 1-5 cards, then each subsequent player can play the same number of cards but of a higher value or pass. Once all but one person has passed, the cards are cleared from the table, then the last player to play leads something else.

Once per round, when you pass, you can rage, placing your rage card on a card that's currently on the table. When these cards are cleared, you can place the claimed card in your hand.

Note that a "Rainbow Bomb" — four consecutive cards with each suit represented — can be played on your turn no matter what's currently being played, and this can be beaten only by a higher Rainbow Bomb.

When one played voids their hand, the round ends. Everyone with cards in hand then scores 1-3 points per card based on how many they have, then you shuffle for a new round unless the weekend is here. 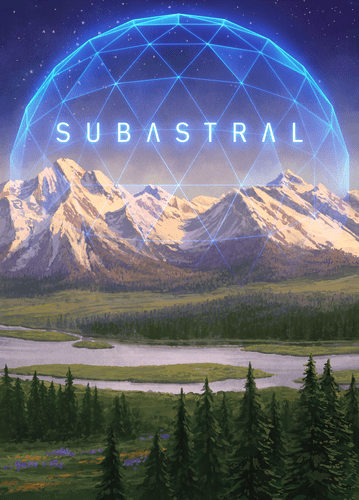 • Forgive the déjà vu, but in 2020 Ben Pinchback and Matt Riddle designed Stellar for Renegade Game Studios, and in Q2 2021 they'll have another card game on the market from that same publisher: Subastral.

Here's an overview of this 2-5 player game:
Quote:
In Subastral, you collect cards that represent your notes on eight different biomes: subtropical desert, savanna, tropical rainforest, chaparral, temperate grassland, temperate forest, taiga, and arctic tundra. You start the game with three random cards in hand; each card depicts one of the eight biome types and is numbered 1-6. Eight cards are placed onto six clouds in the center of the table, with the deck to the left of the #1 cloud and a sun card to the right of #6.

On a turn, play a card from your hand onto the matching numbered cloud, then collect any pile of your choice to the left or right of the pile on which you played. If you choose a cloud to the left toward the deck, you add the cards on that cloud to your hand, then draw an additional card from the deck and add it to your hand. If you choose to the right toward the sun, you add those cards to your "journal", which is your collection of cards. Cards from the same biome go in the same pile, and you build piles from left to right in your journal as you collect cards from new biomes, with those piles being numbered 1-8. To end your turn, you draw a card from the deck to fill the empty cloud space.

When you hit the "game end" card in the deck, complete the round, then play one additional round. Each player then scores for their journal in two ways: Score for your two biomes that have the most cards, with each card in those biomes worth as many points as the number of the pile. (In other words, whatever two biomes you start collecting last, you want to collect a lot of them since those cards will be worth the most points.) Next, you remove one card from each biome left to right until you hit an empty space or run out of biomes; the set is worth 1-36 points depending on the number of cards in it. Then you create another set collecting cards from left to right, etc. until your leftmost biome is empty. Whoever has scored the most points wins!

Will your journal of research notes on the planet's biomes be deep and diverse enough to stand out amongst your peers?
Ties for the number of cards in a biome are broken in favor of the leftmost biomes, so ideally you'll have X cards in your first six biomes and (at least) X+1 cards in your final two biomes to maximize both types of scoring. The scoring of these piles is similar to that of Mandala (which I covered in December 2019), with the cards having no value initially and acquiring value as the game progresses, with each player valuing cards differently depending on where they land in their journal.