Games for Groups: Become a Ghost Writer, Catch a Wolf, and Act Like a Mean Girl

Patron Badge for 2004 through 2022
Maybe I'm being overly optimistic, but with COVID-19 vaccinations being more plentiful as the weeks pass, I thought I'd highlight a few new games for larger groups of players in case you're ready to gather with others once again.

• We'll start with the team game Ghost Writer from Mary Flanagan, Max Seidman, and Resonym, a design for 4-8 players that features Password-style gameplay with each team trying to guess the same secret word. Ghost Writer was Kickstarted in early April 2021 ahead of a Q4 2021 release date. Here's how it works:
Quote:
Renowned mediums are competing to figure out a secret object and prove they can connect with the "World Beyond". The first team to figure out the secret object wins! 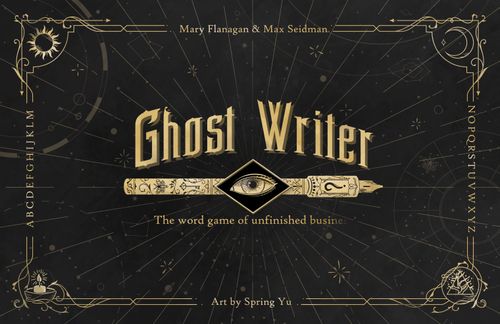 To set up Ghost Writer, divide players so that the Sun team and the Moon team each have one Spirit and up to three Mediums. The mediums on a team share a hand of seven question cards, and the spirits begin the game by choosing one of the five objects on a card as the secret object. On a turn, the mediums pass two question cards to their spirit, with sample questions like "What color is it most commonly?", "What fictional character has it or uses it?", and "If it were a musical instrument, what would it be?"

The spirit discards one question card face up, then returns the question card it's going to answer to their mediums, then slowly writes the answer one letter at a time for all to see. As soon as the mediums think they know what this clue word is, they yell "Silencio", and the spirit stops writing. The other team of mediums might see only the letter "Y", but if you know the question is "What color is it?", then you know the clue must be "yellow". To end your turn, draw two new question cards.

On a turn, instead of handing over question cards, you can attempt to guess the answer — and to do so you write like the spirits, one letter at a time. If you write an incorrect letter, the spirits will stop you, marking out your error, with your partial guess giving the other team more information. If you guess the entire word correctly, you win!

• Last Message, a Q3 2021 release from designers Juhwa Lee and Giung Kim and publisher IELLO, features something of the opposite spirit of the previous title, with one player trying to deliver a secret message to almost everyone else, while another player tries to thwart this communication.

Here's an overview of this 3-8 player game, which is explained even more succinctly on the back of the box:
Quote:
A crime was just committed! The victim is unable to speak — but they can draw, and in doing so they will ideally help the inspectors guess who in the vast crowd is the criminal! This shifty character will do anything and everything to cover their tracks, though, so will you be able to stop them before the last message? 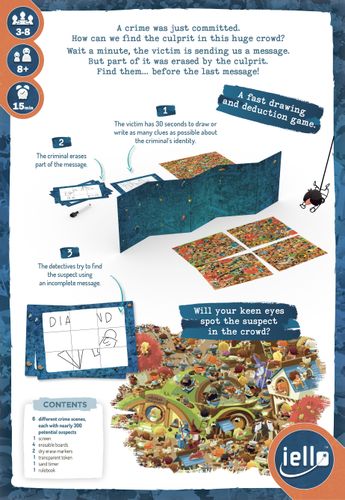 In Last Message, the victim of the crime gives clues over four rounds to help the detectives determine the identity of the criminal. To give clues in a round, the victim has 30 seconds in which to draw and write in a 3x3 grid — but before handing over these clues, the criminal can erase part of these drawings.

If the criminal is not identified by the end of the fourth round, they win the game; otherwise, the detectives and the victim win.

• Another title that features the same spirit of one vs. all as the previous game — although round by round rather than throughout the entire game — is Uly & Polly from designer Roberto Fraga and publisher Blue Orange Games. Unlike Dr. Eureka and other titles this designer/publisher team has released in recent years, this is not a real-time game.

Here's how this tiny 2-5 player game that debuted in early April 2021 works:
Quote:
Uly & Polly is a semi-cooperative game in which each round one player competes against all others. This one player is Uly, the mischievous little wolf who likes to hide in the flock of sheep. Everyone else works together as Polly the sheepdog to find the little wolf's hiding place.

To set up for the round, lay out the sixteen sheep tiles. While all other players close their eyes, Uly then swaps the wolf token for one of the sheep. The Polly players then place the sheepdog token on a tile and reveal it. If they already found Uly, they win the round, but if not the Uly player chooses two tiles adjacent either orthogonally or diagonally (whether Uly is on one of those tiles or not) and swaps them. Polly then moves to any adjacent tile and reveals it. 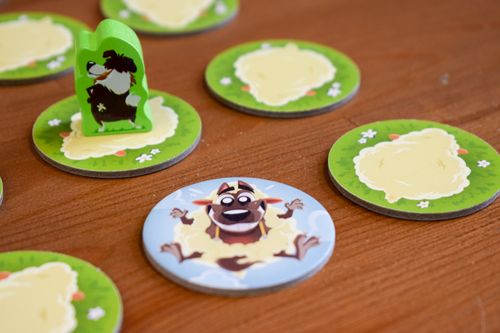 If Uly is still in hiding after eight tiles have been revealed, the Uly player wins the round and receives reward tokens; otherwise the Polly players receive rewards. After each player has been Uly once, whoever has the most rewards wins!
• For non-stop meanness instead of single-round meanness, I'll direct you to Mean Girls: The Party Game, due out on June 1, 2021 from designer James Vaughn and publisher Big Potato and designed to let you unleash your inner Regina:
Quote:
Get ready for a party game that's fresher than peppermint foot cream and filled with more secrets than Gretchen Weiner's hair.

Gather your friends, tear a page of the Burn Book, and pass it around as you take turns answering scandalous questions about each other. Oh, and the best part? It's all totally anonymous. 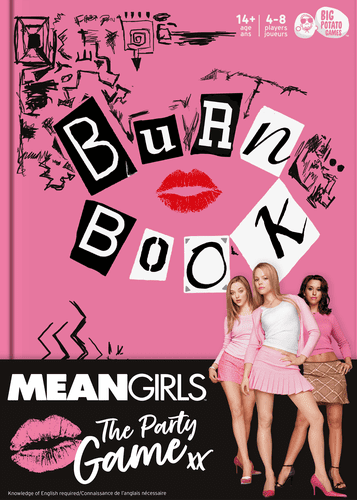 Well, most of the time it is anyway. At the end of the round, each player gets to pick an answer that they'd like to reveal. If you wrote it, you have to come clean in front of everyone — so maybe don't write anything that's too mean.
• We'll close with another June 1, 2021 release from Big Potato, this one being co-designed by Vaughn and Phil Walker-Harding with both games being playable by 4-8 people. Here's an overview of Snakesss, the cover of which can also be used as a torture device:
Quote:
The group has a multiple-choice question and only two minutes to work it out. The snakes amongst you already know the right answer — and they'll stop at nothing to keep you away from it.

In Snakesss, you deal out the cards and try to answer a multiple-choice question with the rest of the players. The more people who get it right, the more points you cash in — unless, of course, you get one of the snake cards. All the snakes already know the answer, so their job is a bit simpler. To score points, they have to sabotage the discussion and mislead the other players. 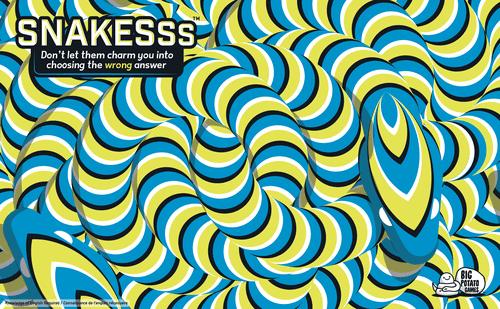