• The 2019 release Hurlyburly from Rikki Tahta, Verbena Tahta, and La Mame Games has been picked up by U.S. publisher CMYK, which plans to Kickstart a new edition of this dexterity game. Here's an overview of the setting and gameplay of the original release:
Quote:
In Armenia in 1901, you lead a team of scientists on an international expedition. In the remote mountains you discover a new element in the volcanic rock and realize that the first team to report the discovery will gain the credit (and everlasting fame). The fastest way to communicate is by flags, so a race starts to build towers and keep your flag flying long enough and high enough to stake your claim. Of course the other teams have the same idea...

Promotional art from CMYK
Hurlyburly is a physical dexterity game of building and defending your tower while trying to demolish your opponents' towers and steal their resources. Imagine Rhino Hero with catapults! On your turn, you can take one action:

—Build (increase the height of your tower or build defenses),
—Prepare (upgrade your catapult or gather ammunition), or
—Attack (launch rocks at opponents' towers to knock them down)

Whoever has a five-level tower with their flag on top at the start of their turn wins.
• In mid-March 2021, Board&Dice tweeted a teaser about Founders of Teothihucan, a tile-lying game from Filip Głowacz that — as B&D's Rainer Ahlfors explains here on BGG — is a standalone game set in the same location and time as the publisher's earlier Teothihucan: City of Gods. Writes Ahlfors:
Quote:
It has been in the works since well before the final expansion was announced, and it has a different designer, uses different mechanisms, and so forth...

Of course, due to the popularity and fan base of Teotihuacan: City of Gods, with us being the publisher of both games, we intend to make fans feel "at home" in this second game by utilizing some of the same artwork and iconography, none of which is, of course, our own creation, but rather based on murals and sculptures found in the city of Teotihuacan itself. 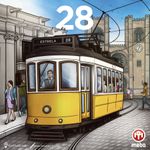 • Portuguese publisher MEBO Games has dropped a bit of information about its next release: a 2-4 player game from designer Pedro Santos Silva titled Lisbon Tram 28 — although the box bears only the numeral "28".

In case you are curious as to why "28" might be all that's necessary to make it clear what the game is about, here's an excerpt from the Essencial Portugal website about Tramway 28:
Quote:
Tram 28 is one of the jewels of Lisbon and the small yellow wagons representing the tramway appear in many souvenir shops in the Portuguese capital. The yellow tramway No. 28 is a must to visit Lisbon. The old tramway crosses the most famous districts of Lisbon such as Alfama, Baixa or Chiado.
As for the game, here's what we know for now:
Quote:
Lisbon Tram 28 is a game in which you travel through Lisbon with this famous tram, pick up passengers, and take them to visit some of the city's monuments.

Handle your tickets strategically so that you can move your tram around Lisbon's historical area. Set the best route so you can get the right passengers to the most valuable monuments. Optimize your tram's space, unlock bonuses that will improve the way you can play during your turn, and connect the tickets from the monuments you will visit. 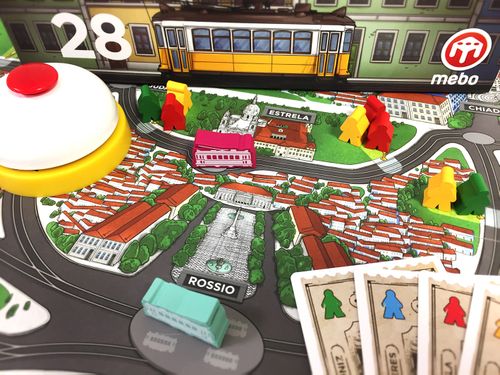 You receive points via the cards from visited monuments and the connected tickets, and whoever earns the most points wins.
• Pencil Nose is not a new game, having first appeared in 2018 from U.S. publisher Fat Brain Toy Company, but I greatly appreciate the ridiculousness of this promotional video from Piatnik to coincide with its release of the game in Germany in January 2021:

"You will believe that a nose can pencil..."