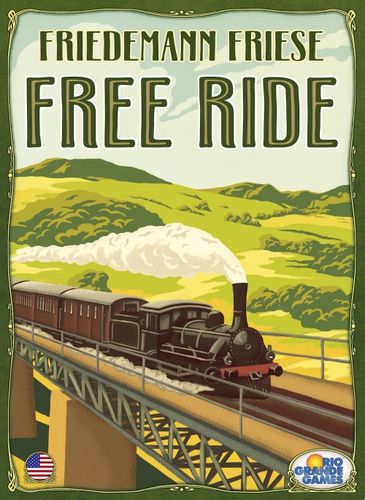 German publisher 2F-Spiele has announced its next release, and you might notice a familiar (non-2F) logo on the lower-right corner of the English-only edition of the game.

Yes, 2F-Spiele is once again partnering with Rio Grande Games for distribution of its titles in English, and 2F-Spiele's Henning Kröpke released this following statement about this development:
Quote:
After Stronghold Games distributed all our new games in the USA from 2015 to 2019, there were several changes during the last year. As a result, and based on a mutual agreement, we stopped the cooperation in a friendly way.

This was the reason why we released the two games Feierabend/Finishing Time and Faiyum in bilingual first editions including English and German rules, and why our distribution partner Spiel direkt distributed them in Europe and in parts worldwide to local game stores. Additionally, BGG helped us by selling part of the print runs directly to gamers.

In the coming years, we will continue to release bilingual editions of our new games at 2F-Spiele and our partner Spiel direkt will continue to distribute them to local game stores — but we can now also present a new "old" partner. We cooperate again with Rio Grande Games, who anyways never stopped to successfully sell our classics like Power Grid and Friday, and who will be again our distribution partner for English editions of all our new releases.

We will start with the second print run of Faiyum, and that production finishes in early July [2021], and following this is our new release Freie Fahrt/Free Ride. There are two exceptions in 2021: Faultier/Fast Sloths, which is already available from us at 2F-Spiele since early June in a bilingual edition including English and German rules, and (in November) Fabelsaft, which we release again only in German.

For those not familiar with Faiyum, a game that challenges you to develop and use well a personal hand of action cards, I suggest checking out my written and video overview from May 2021.

As for Free Ride, here's a detailed overview of the gameplay, which seems to resemble TransAmerica in its building costs and how you can build outward from the locations you can currently reach with your train, although the game has an interesting method for how you will determine where you want to go:
Quote:
Around the end of the 19th century, a growing network of railway lines was built in Europe, allowing people to travel to the major cities to visit beautiful structures influenced by Art Nouveau and Historicism.

In Free Ride, you are one of several people in charge of building railway lines, connecting the cities in Europe, and carrying passengers to those cities. The game board shows 45 cities connected by a network of potential routes, and all railway lines built will be one of three types: lines owned by you, lines owned by fellow players, and state-owned lines. When you travel along railway lines, you pay nothing to travel on your lines and state-owned lines. To travel on a fellow player’s line, however, you must pay them 1 coin, which converts their line to state-owned. From then on, traveling on that line is free for all players. As coins are limited, you should carefully balance the building of your lines with the conversion of fellow players' lines to state-owned lines. 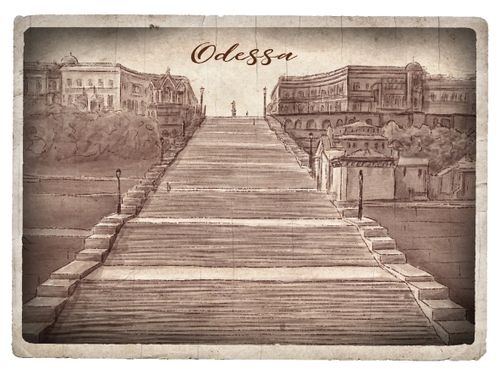 One of the city images: Potemkin Stairs in Odessa
Where do you want to build? At the start of play, each player drafts part of a travel route. Multiple travel routes are available for choosing, and each travel route consists of three cards. When you choose a route, you take either the first and second cards or the second and third cards as your starting and ending point (in that order). Return the unchosen card of that route to the box. Place your train on that starting location. On a turn, take one of three actions: 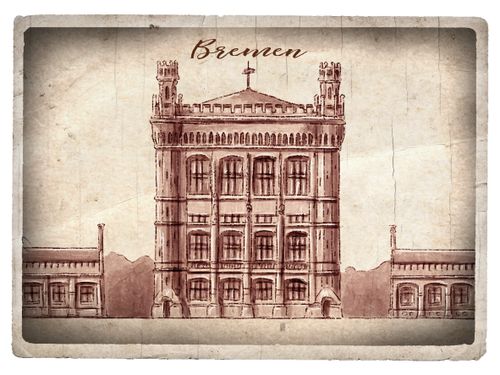 Another city image: Water Tower in Bremen
Once the third deck is empty, you can either withdraw from the game with uncompleted routes (returning those cards to the box) or keep taking turns until you finish all your routes, at which point you immediately gain 1 coin and withdraw. In either situation, you earn 1 coin (and do nothing else) on each subsequent turn. Once all players have withdrawn, you tally your score, earning 3 points for each coin, 5 points for the first card you have of a city, and 2 points for each other card you have of a city. (Each of the 45 cities appears once in each of the three decks.) Whoever has the most points wins.

Free Ride also offers a difficult solo challenge!
2F-Spiele expects to release Freie Fahrt in August 2021, with the Rio Grande version of the game taking a bit longer to hit the retail market since it needs to travel across the Atlantic Ocean first.