Circle Through Life as a Pilgrim, and Demonstrate Resurgence Following the One Day War 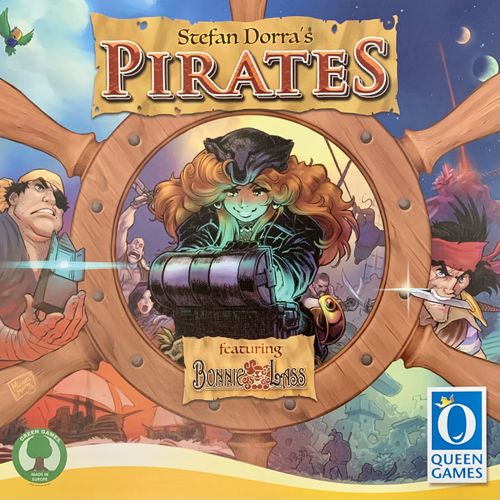 • Some people research games and know every edition of a design that's ever been released — but that's not most people. Most people look at titles on retail shelves (or projects on Kickstarter) and choose what's in front of them without regard for past releases.

Take, for example, Stefan Dorra's Pirates, which was Kickstarted by German publisher Queen Games for release in Q4 2021. This design was first released in 1996 as Die Safeknacker by ASS, then revised and re-released in 2006 by Queen as Buccaneer. The Kickstarter project mentions Buccaneer in passing, but keeps the focus on Pirates' setting, which is in the world of Bonnie Lass, a comic series by Tyler Fluharty and Michael Mayne, with Mayne's art and characters being used in the game.

A search for the game's name on BGG brings up dozens of other "pirates" results before this title, but that's because the audience for this design primarily isn't on BGG. The generic name fails SEO guidelines, but it tells the potential audience pretty much all that it needs to know: "You want a game about pirates? This is a game that has pirates."

Why not use "Bonnie Lass" in the title given that the art and setting leans in that direction? Probably because that title would be more baffling than intriguing to the majority of people who want a game about pirates. Let's go big and bold; no need to look anywhere else. You want pirates, and we got 'em! (Side note: Why is Bonnie's eye visible through her hair?! That's disturbing.)

In any case, what's the game about? It's about pirates — but you already know that. More specifically, how do you play? Like this:
Quote:
In the game, you attempt to capture ships, fortresses, and even sea monsters to accumulate the most treasure. On most turns, you will form a boarding party by taking a stack of pirates in front of you (with a stack consisting of one or more tokens with you on top), moving them on top of a stack in front of another player, then moving the new stack back in front of you.

Previous versions
On a future turn, you may use this stack to capture one of the four cards in the display as long as the size of the party meets the minimum requirements. The pirate on top of stack is the captain, and they receive a treasure for leading the raid. (The second pirate in the stack, the mate, might also receive a treasure.) They collect the gold listed on the card, then must pay the value listed on each pirate in their crew, making up any gold they lack from their own coffers. If they do this, they keep the card and increase their scoring.

You can mutiny by placing a stack on another stack, then going after one of the four cards immediately, but you must then pay the mate and the rest of the crew double their pay.

After all cards have been captured and the game ends, players receive additional gold based on the relative number of treasures they have captured. Whoever ends up with the most gold wins.
• Let's consider another game with a single word title: Nick Case's Pilgrim, due out in 2022 from Spielworxx and Case's own A-Muse-Ment. 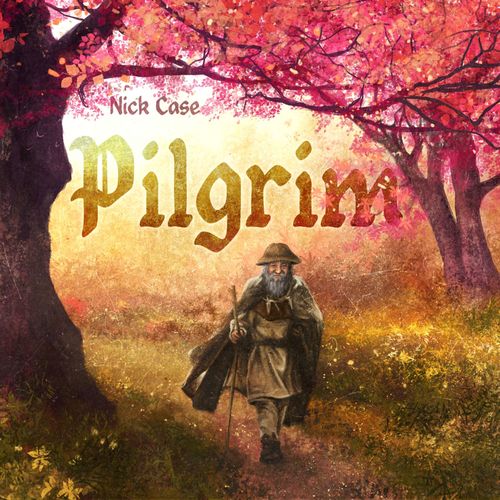 "Pilgrim" seems better as a single word title, mostly because unlike pirates I haven't seen pilgrims advertised in hundreds of different movies and TV shows over the past decade. I think little about pilgrims, which makes me wonder what the game could be about. This says as much about me as it does about the game, of course, given that I'm curious to learn more about the unfamiliar thing and ready to reject the familiar thing.

In any case, here's an overview of this 2-4 player game that plays in 60-150 minutes:
Quote:
In Pilgrim, players are abbots and abbesses of their own provincial 14th century abbey, each seeking to:

A unique twist on a mancala-movement mechanism distributes a player's acolytes across eight duties and the capital city to determine each turn's action. 18xx-style tile development on the map board builds trade routes for revenue and pilgrim trails for endgame points. Common serfs need to be ordained to ensure that the abbey is adequately serviced and your acolyte numbers will need to be carefully balanced across ever changing duties and vocational tasks. 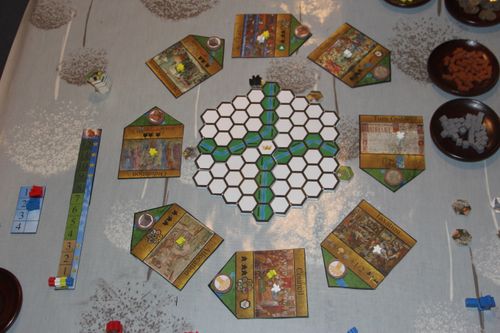 Playtest in 2019
Pilgrim is a game played over 26 rounds with perfect information, zero randomness (once the game starts), and one hundred and sixty sextillion possible starting set-ups. Player interaction is intense and constant. The meek might inherit the earth, but you will need to be made of stronger stuff to become the next cardinal and win the game.
• And now we come to Resurgence, a 1-4 player game from designer Stan Kordonskiy, with this being the first title that he will self-publish through Half-a-Kingdom Games. "Resurgence" has served as the subtitle of several game expansions, but never as a title on its own, which is surprising given the associations it brings to mind of conflict and challenges — perfect subject matter for a game.

In any case, here's an overview of this 2022 release that plays in 60-90 minutes:
Quote:
No one really knows what triggered the One Day War between the superpowers, but a single day is all it took to end the Before World. After the governments collapsed, leaderless groups of survivors huddled in the ruins of once great cities. The climate is brutal, resources are scarce, and mutant tribes are roaming the wastelands. The world desperately needs a hero to rally the people and lift them out of the ruins. 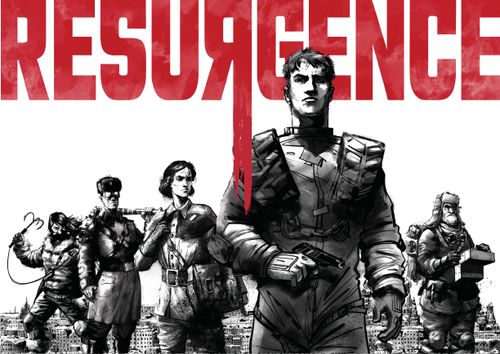 Resurgence is a competitive, Euro-style board game for up to four players. It offers a unique blend of bag-building, hidden worker placement, and resource management that creates a one-of-a-kind gameplay experience. At the start of the game, each player selects a hero in charge of a small band of survivors and a few supplies. Each round of the game, players need to secretly plan where they are going to send their workers in order to accomplish various tasks and exert their influence, whether they're completing missions around the ruins of Moscow; gathering fuel, food and spare parts; rescuing survivors; learning new skills; or building their base.

Resurgence offers different routes to achieve victory, and in-game events and end-game directive cards provide replayability and variability from game to game. At the end of the game, the hero whose faction is victorious becomes the new leader and unites all the survivor groups in the sanctuary of Hope Island.