Why? Well, read on and let me tell you a story.

As most great stories, this one started with the protagonist being bored at work. In this case it was Morten anno 2016 who was bored at his IT job and his mind started to wander and wonder: “What will happen if I take my PnP game Endless Nightmare and marry it with mechanisms from Onirim?” I’m sure everyone has wondered about this important existential question.

The answer was the game ForeShadow – well, back then it was called Forest of The Shadow. 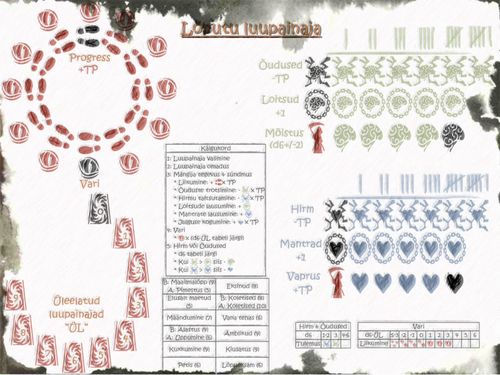 The board for Endless Nightmare in its Estonian (and only

The second step of most great stories is that the protagonist writes a board game review. In our story Morten anno 2019 wrote a review of the game Aerion by the designer of the above mentioned Onirim, Shadi Torbey, who’s Morten’s favorite board game designer.

To his great surprise and joy, he got an email from Shadi thanking him for the review. Morten replied with some gushing, and they ended up e-talking, which lead them to offer to playtest for the other.

Morten shared the files for ForeShadow, which resulted in a lot of great feedback.

The third step of most great stories is having coffee with the protagonists favorite game designer and that’s just what Morten anno 2019 had at SPIEL in Essen, which has absolutely nothing to do with the development of ForeShadow, but it was great for Morten to meet Shadi – it turned out that he’s a really nice guy who’s easy to talk to for an introverted geek and Morten persuaded him to sign a copy of the Onirim rulebook. 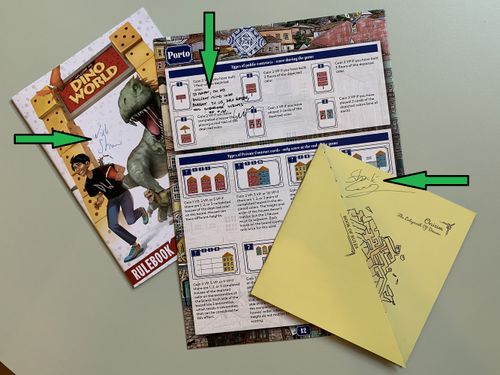 The rulebooks Morten got signed at SPIEL ’19 – the rightmost one is from Onirim.
As said, this coffee meeting had nothing to do with the development of the game, which meant that I unfortunately couldn’t work in a pun about the meeting in Essen being ESSENtial, so I wrote this irrelevant paragraph to include it anyway.

Like in most great stories there’s a phase where nothing much happens because the manuscript writer needs a number of minutes to go by to pad the episode to the length of a standard television slot.

The same happened in the ForeShadow project. Morten anno 2019 were super busy making Automas and Morten anno 2020 took up the mantle of not having time for the game. Therefore, the project idled until it was time for the plot twist.

Once minutes have been idled away the lazy writer of the great story realizes that they slept too long and now needs something dramatic to happen to save the protagonist from the pickle they got in by procrastinating.

In our story this took the form of a publisher saving Morten from shopping the game around by reaching out and to ask whether they could publish the game and have it developed by Shadi.

You can probably guess that Morten said yes. No shit, Sherlock - as Doctor Watson famously shouted from the toilet when he was constipated.

His game would be published, and he would get to work closely with the designer he admired the most and it was even more meaningful, because two of Shadi’s games, Onirim and Nautilion, were among Morten’s best tools for coping with depression.

Awesomeness, with awesomesauce on top and a side order of awesome.

The mentor and the montage

This is the time in the great story where uplifting and energetic music accompanies a montage of the protagonist building the device that saves the day using a flashlight, wet macaroni, and two penguins.

In the ForeShadow story, the montage showed Morten building his life dream from ink, paper, and plastic sleeves with Seligkeit by Mono Inc as the music.

In most great stories the protagonist has a wise opera singer as mentor, so it’s great that that’s exactly what Shadi was. He helped improve the game a lot, sometimes with Morten explaining why Shadi’s suggestion couldn’t possibly work and then after a while pausing to think to himself: “Morten, you’re arguing against the guy you think is the best game designer in the world, maybe you should rein in your ego and listen to him.”

Unsurprisingly, it often turned out that Shadi was right.

Art and a second plot twist

Modern storytelling is nothing without great graphics and the prototype “artwork” that Morten had mashed up for the game, wasn’t gonna cut it, so the question remained who would make the actual artwork. Vincent Dutrait (Jaipur, Lost Cities, The Quest for Eldorado, Atlantis Rising and many others) was signed, which was pretty darn cool. 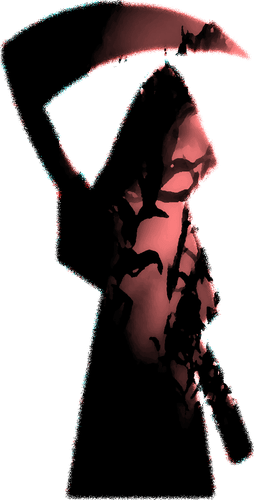 Maybe you know this guy? This is a bad prototype illustration Morten mashed up for an old version of the game. He (the Reaper, not Morten) is no longer in the game (well, he sort of is) and the image not indicative of what the game will look like

.
We’re now at the point where the protagonist beats the villain using the macaroni device, but unfortunately that’s not what happened here. Instead we got a new plot twist.

Having a published copy of ForeShadow in his hand would have been one of the best events of Morten life. But then something happened and it turned out that ForeShadow would never be published
.
.
.
because it was no longer called ForeShadow – its name was changed to Skoventyr.

Info box:The name, Skoventyr, is a contraction of the Danish words “skoven” (the forest) and “eventyr” (fairy tale). The reason for the use of Danish words is that the theme of the game drew its inspiration from Danish folklore.

Shadi lived in Belgium, was born in Germany, and has roots in Lebanon while Morten on the other hand lived in Denmark, was born in Denmark, his roots are in Denmark as far back in his family history as he knows about. Which one of them do you think came up with the idea of using Danish folklore? Yes, you guessed it – it was Shadi.

So, that’s why Morten smiled.

No, he wasn’t smiling because the game was to be inspired Danish folklore

. He smiled because he got to work with Shadi Torbey, with Vincent Dutrait, and if things go according to plan his first game, his baby, will make it off his desk and into the world.

This story has several chapters left, though, before it becomes clear whether the protagonist will prevail or whether it’ll end in tragedy.

A crucial part of those chapters is playtesting and the first wave of large scale playtesting started a couple of weeks ago and if you’re willing to help write the final chapters and make Morten prevail, you can find the sign up form is here.