Smother Fire with Snow, Split Dice Across a Mirror, and Play Qwixx Longer 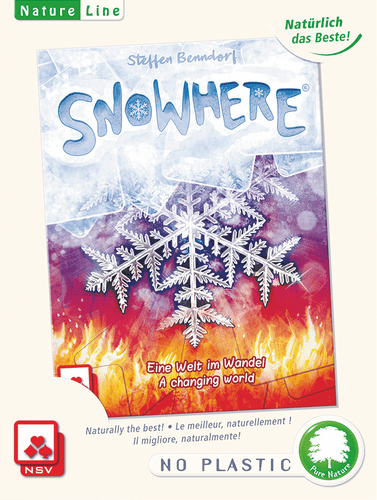 German publisher NSV debuted three titles at SPIEL '21, with one of those being Snowhere from frequent NSV collaborator Steffen Benndorf.

As with NSV's The Mind, Snowhere seems like it will invite "Is that really a game?" type of questions from those who encounter it. See whether you agree after reading this description:
Quote:
Your challenge in Snowhere is to use snow cards to extinguish all the fire in play.

To set up the game, spread the 111 cards fire-side up on the table in a single mass so that none of the cards are separated from one another. On a turn, a player picks up a fire card that is either uncovered or covered by at most a sliver of one other card. Turn the card over. If it shows a giant snowflake, set it aside; otherwise, use it to cover one or more of the fire cards still in play. You cannot cover a fire card one-to-one, but must cover part of the playing area (along with fire) with the snow card or cover part of another snow card already in play.

When a player can no longer remove any fire cards from the table, use any giant snowflakes set aside earlier to cover as much of the remaining fire as possible. The fewer fire cards revealed, the better, and if you have covered all of the fire, then you win.
This design — which is listed for 1+ players — sounds like an interactive art exhibit as much as a game, and I'm intrigued by minimal rule sets like this that leave me wondering how something even works. The experience itself is the thing, and I'm curious to see what it's like.

• You might notice that Snowhere's packaging advertises itself as part of NSV's "NatureLine". Aside from this title, NatureLine consists of a half-dozen other titles — such as Benndorf's Qwixx and The Game — that NSV is now producing with no plastic components. To summarize the details on the NSV website, the NatureLine titles use:

—Paper banderoles on card decks instead of cellophane wrapping
—Score pads and instructions made from recycled paper
—Unpainted wooden pencils
—A box that is packaged inside a slipcase, with both being made from recycled cardboard
—Water-based varnish and sustainable inks
—Wooden dice that are "100% FSC"

• Speaking of Qwixx, one of the other new titles from NSV is Qwixx Longo, co-designed by Benndorf and Reinhard Staupe, with this title playing much like the original game, but taking a bit longer to play...which you might have already suspected given the name.

For those unfamiliar with Qwixx, here's a rundown of gameplay in Qwixx Longo, which will also cover what's new for those who already know the game:
Quote:
Qwixx Longo is a quick-playing dice game in which everyone participates, no matter whose turn it is. Each player has a scoresheet with the numbers 2-16 in rows of red and yellow and the numbers 16-2 in rows of green and blue. To score points you want to mark off as many numbers as possible, but you can mark off a number only if it's to the right of all marked-off numbers in the same row.

On a turn, the active player rolls six eight-sided dice: two white and one of each of the four colors listed above. Each player can choose to mark off the sum of the two white dice on one of their four rows; additionally, if the sum of the white dice matches one of the two lucky numbers printed on your scoresheet, you immediately mark off the next number in the row in which you have the fewest marks. 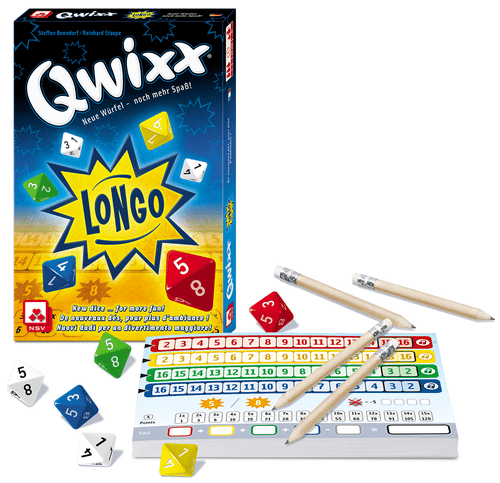 Then the active player can choose to mark off the sum of one colored die and one white die in the row that's the same color as the die. The more marks you can make in a row, the higher your score for that row. Fail to cross off a number when you're the active player, however, and you must mark one of four penalty boxes on your scoresheet. If you have at least six numbers marked in a row, then you can mark off either of the final two spaces in a colored row (15/16 in red/yellow and 3/2 in green/blue) — assuming the dice allow you to do so, of course. If you do this, you also mark off the padlock symbol in that row, locking everyone else out of this color.

When either a player has four penalty boxes marked or a second color is locked, the game ends immediately. Players then tally their points for each color, sum these values, then subtract five points for each marked penalty box. Whoever has the highest score wins.
• The final new title from NSV in the second half of 2021 is Splitter from first-time designer Stefan Nikolic. The game is listed for 1-12 players, but in theory you could have any number of people at the table as long as everyone has a score sheet and knows what numbers are rolled on the dice.

Here's how to play:
Quote:
In Splitter, you must group numbers together to score points — two 2s, three 3s, and so on — but you're placing two numbers at a time, so things won't always work out.

Each player has their own score sheet with 44 empty spaces on it, with two different patterns of spaces included in the box; each pattern has a dashed line through the middle that splits it into two mirrored halves. 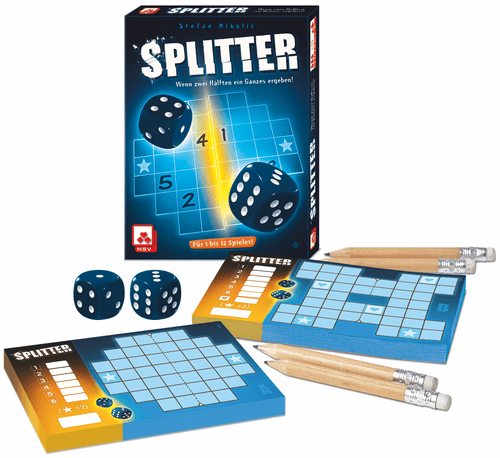 Whoever has the highest score wins.
My immediate question: Why isn't Splitter part of NSV's "NatureLine"? Couldn't these dice be 100% FSC wood? Couldn't the pencils be unpainted?

That's one of the hazards of planting a (sustainable unbleached hemp) flag for environmental causes, of course. Everything else you do suddenly becomes suspect, a source for questions that diverts attention from whatever progress you have made. Sure, you've done X, but why not Y?

I know NSV is busy with SPIEL '21 right now, but I've asked for an interview to cover this question and try to get a bigger picture of what the introduction of NatureLine means.