Patron Badge for 2018 through 2020
• After its kickoff in November 2020, and a tremendous amount of work from designers/contestants, board members, and volunteers (mentors, judges, etc.), the Zenobia Award results are in. Three winners were selected out of the eight Zenobia Award finalists after a close vote and feedback from a panel of 14 judges and the Zenobia Award board members. I mentioned all the finalists in my last Zenobia Award post and now I want to extend a big congratulations to the winners: Akar Bharadvaj's Tyranny of Blood in 1st place, Will Thompson's Winter Rabbit in 2nd place, and Alison Collins' Wiñay Kawsay in 3rd place.

You can check out brief overviews and snippets of the rulebooks for each game below: 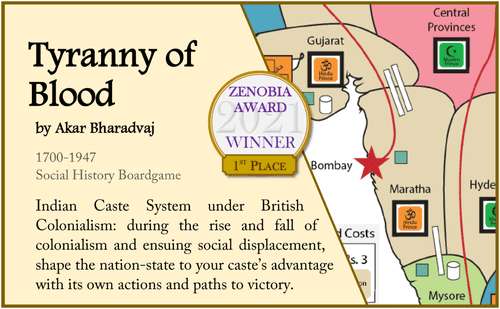 Quote:
Tyranny of Blood is about a hierarchical system that has oppressed people throughout history and has lingering effects that continue to cause suffering today. The game is meant as a condemnation of the system and a method of understanding it, not an endorsement or celebration. I hope that learning about this history will inspire players to think critically about the inequalities that plague the world today, and to struggle against them. … 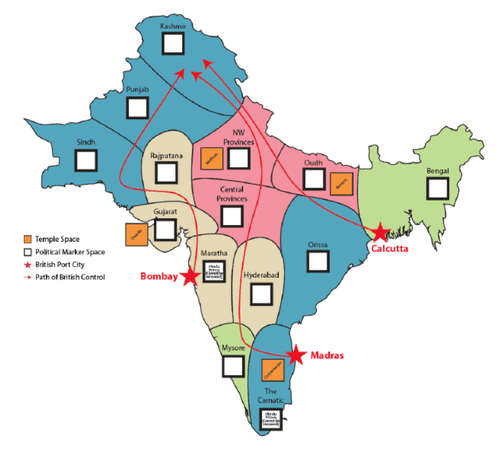 The broad institution of caste has underpinned Indian society for more than 3,000 years, but our current concept of “the caste system” is far more recent. European colonialism and the indigenous response to it precipitated a shift in caste from a somewhat fluid indigenous hierarchy to a strict, oppressive system that has dictated the lives of entire families simply due to an accident of birth.

Tyranny of Blood models the rise and fall of British colonialism in India from 1750 to around 1947, and the ensuing social displacement—in the religious, military, economic, and labor domains—that still resonate today. The game seeks to answer the lofty questions: how do classes with disparate bases of power work together in a society, how do they struggle against each other, and who are the victims of this process?

Each player plays one of the four major caste groups (Brahmin, Kshatriya, Vaishya, and Shudra/Dalit) with the end goal of shaping the coming independent Indian nation-state to support their interests. Each faction has its own role to play in the game and its own method of earning victory points based on its different goals. 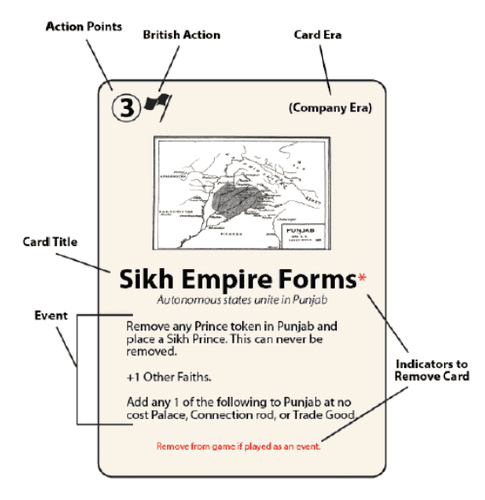 • The Kshatriya player (warriors and kings, represented by green) uses political and martial power to build royal luxury and military prowess, commemorate the legacy of the princely era, and maintain a princely basis for power in an independent India.

• The Shudra/Dalit player (laborers and those barred from society, represented by grey) uses limited labor power to build caste consciousness by playing the other three castes off of eachother, and struggling to build a more egalitarian Indian nation-state.

In this game, the British are not a playable faction, but a non-player force that players will have to respond to, either by fighting against colonial forces, or working with them to oppose the other players. 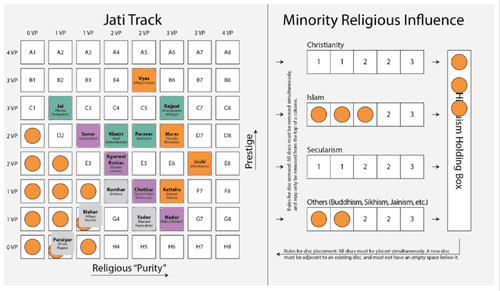 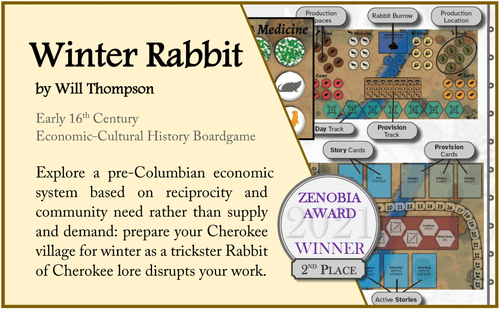 Quote:
In the world we’ve come to call the West, history is seen as a linear thing: events happen, someone writes them down — we interpret those texts to learn of the history; however, occasionally those texts are reinterpreted. For the indigenous people of this continent, the telling of history takes a slightly different form. … 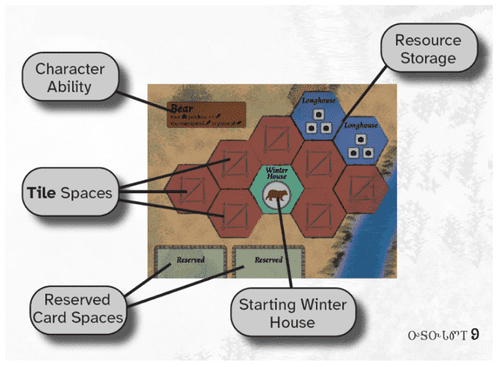 Thus, we see the Cherokee interpretation of history (one shared by many indigenous cultures), where the details of a story might be a vehicle made of “fiction” that delivers a deeper truth. … Games create deeper meaning in the experience of play than they ever could as simple artifacts on a shelf. The meaning emerges from the experience of the story. …

In this game, we are telling a version of that story of the Cherokee people settling in their new homeland. But we aren’t doing so in a literal sense, in the way the story is traditionally told. Instead, we are using the characters from Cherokee fables — Rabbit, Bear, Deer, and others — to convey how such a settlement may have come to be, reflecting Cherokee cultural values. … So, from here, I take the liberty to create a story with you. The story of Winter Rabbit, where the people prepare their village, far to the North of their ancestral home, and work together to ensure all have what they need. …

The goal of Winter Rabbit is to have the highest Wampum at the end of the game. The history and use of Wampum by the Cherokee and other tribes is complex. In this game, it represents each player’s contributions toward the goal of Winter preparation. You gain Wampum by completing Provisions and Stories. …

There are 6 production locations on the board (and the Rabbit Burrow). … When all the Open Spaces (those not covered with Conservation tokens) of a location are filled with Villagers, the location produces. … Clearing land is an option for gaining resources of a particular type after that resource location has already produced. … If a location produces and the Rabbit is revealed there, then no player gets to take resources. Instead, all resources generated in that area are placed in the Rabbit Burrow. … 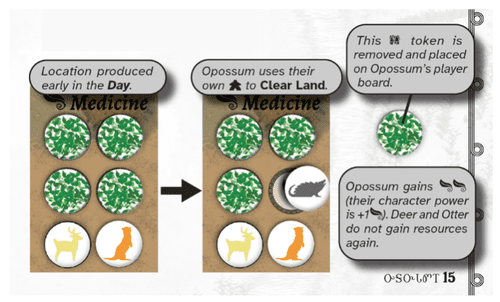 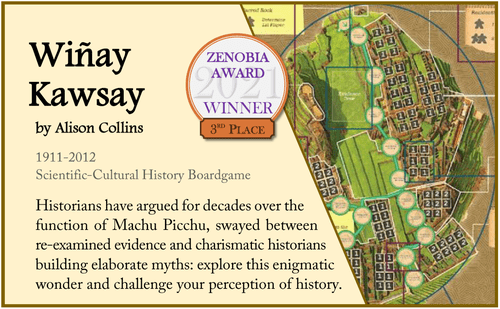 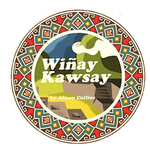 Quote:
The site of Machu Picchu has captured the imagination of historians for over a century. However, despite years of seeking to understand its secrets, the functionality of Machu Picchu is still an enigma. Was it a lost city as stipulated by legendary explorer Hiram Bingham III? Or was it a royal estate? Perhaps a citadel? A religious site? Or maybe something else entirely?

It is up to you, my fellow historians, to explore the evidence found at Machu Picchu to argue for an interpretation of the functionality of the site. However, given the cutthroat nature of publish-or-perish academia, will you be able to succeed in dominating the academic and public perception of what Machu Picchu really was?

Wiñay Kawsay is a 2-4 player competitive board game … in which players are historians seeking to manipulate public perception of the functionality of Machu Picchu. Though largely a deck building game, Wiñay Kawsay also involves worker placement (these workers being three assistants and a Lead Researcher), management of two currencies (coloured blocks and Faction Tokens), and the deconstruction and rebuilding of a central block model of Machu Picchu, which represents the public perception of the functionality of the site.

The name Wiñay Kawsay means “history” in Kichwa, the language family of the Inca. However the word more literally translates to “always life”, reflecting the ever evolving and living nature of history and historical narratives. 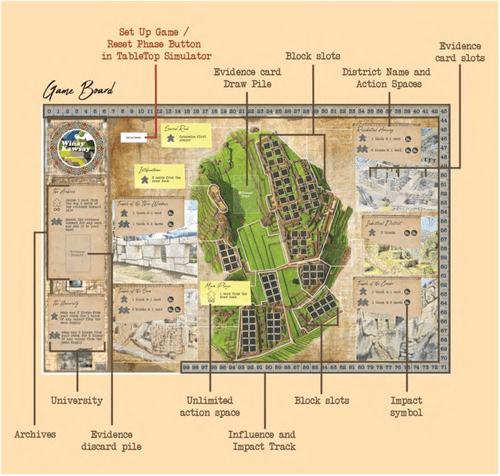 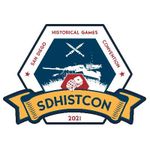 • Several of the Zenobia Award finalists will be demoing their games at the upcoming Fall 2021 San Diego Historical Games Convention (SDHistCon) which is being is held virtually Thursday, November 12 through Sunday, November 15.

If you're not familiar with this game convention, their mission is to "create a diverse and supportive gaming community dedicated to playing exploring historically-based conflict simulations". Even though you may be missing the San Diego weather and sun with SDHistCon being online/not in-person, you can still expect a fun-filled weekend of a variety of historical board game sessions and demos, livestreams, and giveaways. In fact, I even signed up to run a demo for Geoff Engelstein and Mark Herman's WWI, political, negotiation strategy game, Versailles 1919, which I find appeals to wargamers and eurogamers alike. 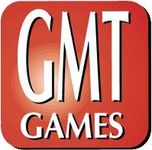 • I spent most of the past weekend in Hanford, California at GMT Games' first Warehouse Weekend event since 2019. I had such a wonderful experience there the both days I attended. Everyone was super nice, friendly, and welcoming. It sort of felt like a family reunion even though, besides the two friends I brought, it was a group of people I've never met before mixed with a few people I've "met" on Twitter. The energy was extremely positive and it was incredibly heartwarming to see so many people excited about building and diversifying the hobby. ...and this is coming from a woman (me) who was on a mission to play all 15+ games that she brought, but only ended up playing 3 of them. I was too busy learning new games from new friends, buying games, and socializing. ...and I loved every minute.

Here are a few highlights from my days at the warehouse: 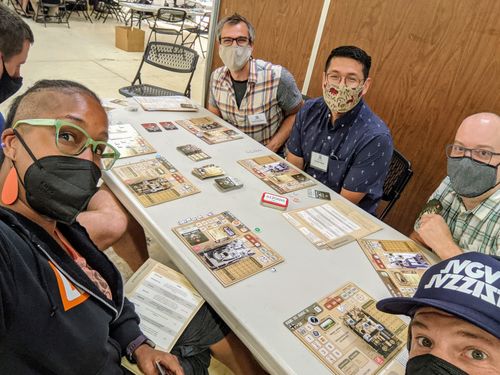 Had a blast playing my first game of Mike Bertucelli's Tank Duel: Enemy in the Crosshairs with some new & old friends including Gandhi designer Bruce Mansfield and his brother Scott. Who knew I'd be into dueling tank warfare?! The multi-use cardplay, mixed with great art and graphic design makes it so hooky...so hooky that a few of us played again later that evening! 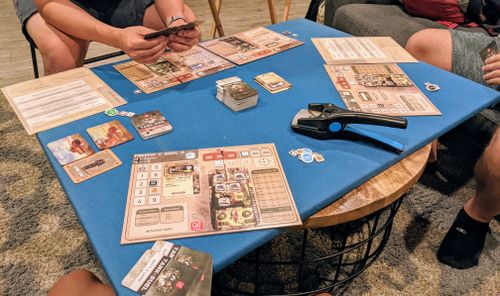 ...Tank Duel round 2 at our Airbnb 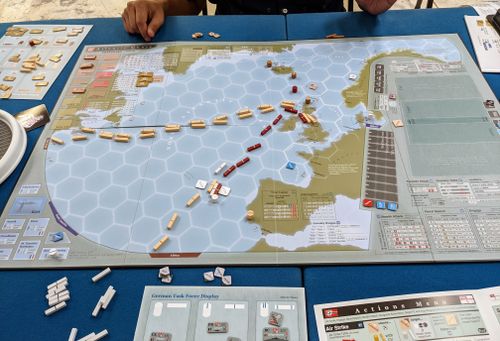 Played a few rounds of my first 2-player game of Jerry White's Atlantic Chase just prior to strapping in my Panzer IV tank for Tank Duel (round 1). I continue to be intrigued by this design and need to make more time to delve in deeper. 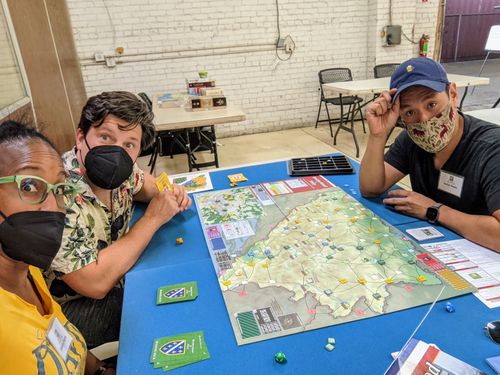 We all thoroughly enjoyed our game of Tomislav Cipcic's Brotherhood & Unity from Compass Games. It's an excellent 3-player game covering war in Bosnia and Herzegovina from 1992-1995. It left us all wanting to play again.

If you're curious about other action at GMT's Warehouse Weekend, Justin Fassino (who's designing SELJUQ: Byzantium Besieged) captured and posted some excellent video footage of the weekend: