• German publisher H@ll Games will reprint and rerelease Stefan Feld's Luna in October 2012, with the game appearing in a bilingual English/German edition that Pegasus Spiele will then distribute hither and yon, as previously noted on BGGN.

• Indie Boards and Cards has revealed one of two upcoming titles teased in its July 2012 newsletter – The Resistance: Avalon, a standalone game from The Resistance designer Don Eskridge that puts a new spin on his previous game:

Quote:
The Resistance: Avalon pits the forces of Good and Evil in a battle to control the future of civilization. Arthur represents the future of Britain, a promise of prosperity and honor, yet hidden among his brave warriors are Mordred's unscrupulous minions. These forces of evil are few in number but have knowledge of each other and remain hidden from all but one of Arthur's servants. Merlin alone knows the agents of evil, but he must speak of this only in riddles. If his true identity is discovered, all will be lost.

The Resistance: Avalon is a standalone game, and while The Resistance is not required to play, but the games are compatible and can be combined.
Travis Worthington at IB&C notes that this game is due out in mid-October 2012, and it will be available for an advance look at Gen Con 2012. 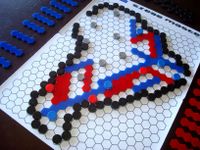 • Spanish publisher nestorgames has released Siege Master by Phillip L. Leduc. Here's an overview of the game play, which is easier to grasp when looking at the examples depicted in the rules (PDF):

Quote:
Siege Master is a two-player abstract strategy game of continental conquest. To set up, players create a map-like shape on a hexagonal grid, then they alternate placing an odd number of neutral fortresses on hexes within this map such that most fortresses are at least three spaces from all other fortresses. The variability of map shapes makes every game a new challenge.

Each player takes a matching set of army tokens and fortress tokens; an army token covers four empty hexes in a row (1x4). Players are trying to capture neutral fortresses, and they do so if the fortress is in an area of zero or more empty hexes that is surrounded by army tokens, the edge of the grid, or both and if no armies can fit into this area. When this happens, the capturing player replaces the neutral fortress with one of his own color.

On a player's turn, if the player's opponent did not capture a fortress on his previous turn and it is possible to play an army adjacent to the opponent's previously placed army, then the moving player must do so. Otherwise, the active player can play an army token anywhere on the map. (A swap rule applies after the first turn; when swapping, all tokens played by the first player on his first turn are replaced by the second player's tokens.

The player who captures more than half of the fortresses on the map wins.

• Pegasus Spiele, which serves as distributor and publishing partner for eggertspiele, has announced that due to the strong response to the Express 01 crowdfunding project underway through August 15, it's going to add a game board and scoring marker to the package, in addition to the U.S. components for all supporters. (Currently the U.S. components are listed only as a stretch goal beyond what's been collected for the project.) 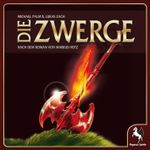 • Another title coming directly from Pegasus, with an expected October 2012 release date, is Die Zwerge by designer Michael Palm and Lukas Zach.

Quote:
Based on the first novel of the Die Zwerge tetralogy by author Markus Heitz, the goal of the cooperative game Die Zwerge is to keep evil from flooding the "Geborgene Land". During set-up, players choose one of the dwarves from the novel, each of which is equipped with a unique special ability and different stats for fighting, crafting and running.

Before each player's turn, the evil usually breaks through one of the four big gates – which are normally heavily guarded by the four dwarf tribes – and spreads to the land by destroying it. On his turn a player spends two action points to use two of five actions. He can:

-----• Fight against the advancing enemies (orcs, trolls and albae, i.e. dark elves).
-----• Travel to other locations.
-----• Lobby the big council to give advantages to all players – and without the agreement of the council, everyone suffers disadvantages.
-----• Solve a minor quest for rewards.
-----• Take on the current major quest, revealing the next major quest if successful. Completing these quests is the only way to win the game.

For most of these actions, a player must succeed in a dice-driven challenge. If the players cannot control the flood of evil while simultaneously solving the major quests in time, they will lose.