Stack Animals in a Line, Play Your Colors Right, and Earn a Meatball for Relationship Bliss 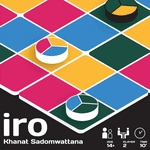 • In September 2021, Thai designer Khanat Sadomwattana successfully completed a Kickstarter campaign for the two-player abstract strategy game Iro, which will be shipped to backers in Q1 2022.

Here's an overview of the gameplay:
Quote:
In Iro, you win by moving one of your pieces to the opponent's starting row, but the movement of each piece is dictated by the colors on top of it.

To set up, each player arranges six tiles in front of them; tiles are divided into 2x2 grids, with the four spaces of the grid each being in a different color: blue, red, green, and yellow. Arrange the tiles in a rectangle six spaces wide and four deep, with a space of each color in the row closest to you. Place 12 of your 16 pieces on the two rows closest to you, with the remaining pieces going into a reserve. Each piece shows three different colors or one color twice and a second color a single time. Once you've done this, reveal your set-up and place your tiles against the opponent's to create a board eight rows deep.

On a turn, you have two options:

—Swap one of your pieces on the board for a piece in your reserve.
—Move one of your pieces on the board 1-3 spaces, with moves being orthogonal or diagonal. The spaces that you move on must match the colors of that piece, and you can land on a color only as many times as the number of times that color appears on the piece. You can move onto a space occupied by your own piece, but you can't end your move there. If you land on an opponent's piece, place that piece in the opponent's reserve and end your movement. 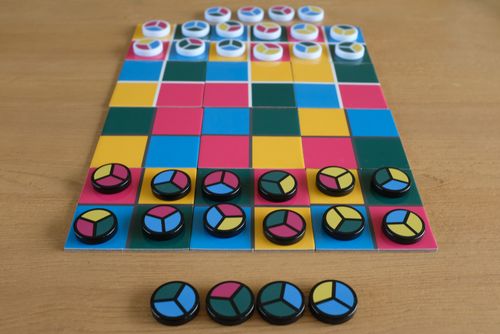 Non-final components
If you land one of your pieces in the row closest to the opponent, you win.
Sadomwattana is still working on plans for distribution of the game outside of the Kickstarter fulfillment.

• A similarly straightforward two-player abstract strategy game is Tuned, coming in Q3 2022 from Italian designer Alessandro Cuneo and Spanish publisher ThunderGryph Games. Here's a rundown of how to play:
Quote:
In Tuned, you want to get your animal band in order so that they'll be ready to play — and although you're competing for space in the practice room with another band, you can incorporate all the musicians in your quest for the right arrangement.

To set up, each player takes two donkeys, two dogs, two cats, and one rooster. Place the rooster on the "move a figure" action space on your side of the 3x3 game board, leaving your two "add a figure" actions exposed. On a turn, move your rooster to an open action space on your side of the board. If you choose "add", then place one of your figures on the board by following the placement rules: 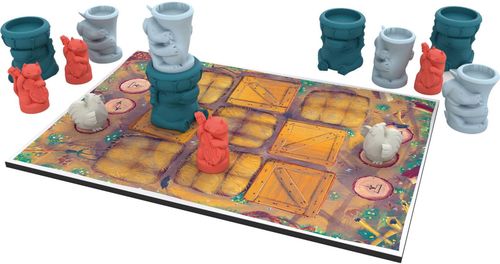 For a "move" action, choose an animal on the game board and move it to a new location while following the placement rules. You can move a portion of a stack; you cannot reverse the opponent's previous move.

As soon as a player creates an orthogonal or diagonal row with three of the same animals on top, that player wins. If a player is forced to add an animal (because their rooster occupies the lone "move" action) but cannot, they lose.

• In December 2021, U.S. publisher offcut games funded Patrick Brennan's two-player game KÖ-ØP on Kickstarter (KS link), with this sounding like a concept game in which everyone involved went all in. An overview:
Quote:
KÖ-ØP is a two-player, co-operative card game about assembling furniture with a partner.

Each player starts the game with a secret needs card that tells them which "love languages" they need to score to be satisfied in the relationship. On their turn, players attempt to communicate the love languages they need by pointing at cards in their partner's hand. Players then use these cards to build their furniture. The game ends after players have attempted to build three pieces of furniture. 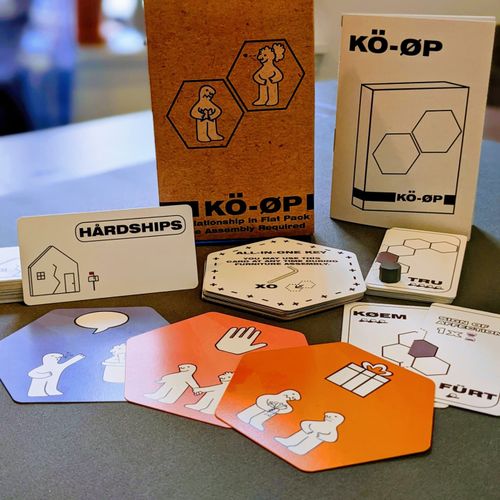 Players must earn at least one meatball in order to win, with meatballs being earned based on the number of needs cards satisfied and the complexity of the furniture players chose to build. The more meatballs the players score, the better their end result.
KÖ-ØP is due out in the second half of 2022.