• Designer Thomas Sing has become best known for the co-operative trick-taking game The Crew: The Quest for Planet Nine (my overview), but he's published a variety of games over ten years and doesn't seem to have a particular design style.

As an example of that diversity, let me introduce Circles, a late 2022 release from HUCH! for 2-5 players:
Quote:
Circles features a double-sided game board, with both games being driven by the same game-action mechanism — a player rolling a ball in the felt-covered exterior ring of the track. Place the ball in the right spaces, and you'll make good progress! 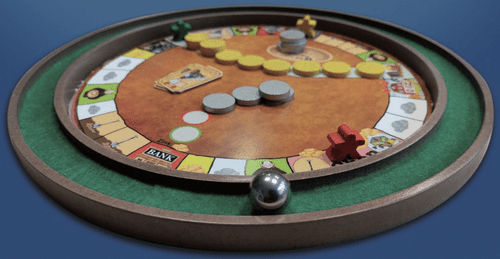 On one side of the game board, you dive into the Wild West to mine gold and silver, fight bandits, and fulfill your dream of owning your own ranch. On the other side, you visit the shooting range and try your hand at hitting various targets.

• Another late 2022 release from HUCH!, co-published with Atalia, will be East India Companies, a 2-4 player game that plays in 60-90 minutes from French designer Pascal Ribrault, whose debut game Virtù was released by Super Meeple in November 2021.

Here's a summary of this new design:
Quote:
In the 18th and 19th centuries, shipping companies aimed to strengthen the trade between the West and the Far East that had begun in previous centuries. Tea, spices, coffee, and silk are commodities much consumed in Europe, and their buying and selling prices depend closely on supply and demand. Fortunes can be made and gambled depending on circumstances. 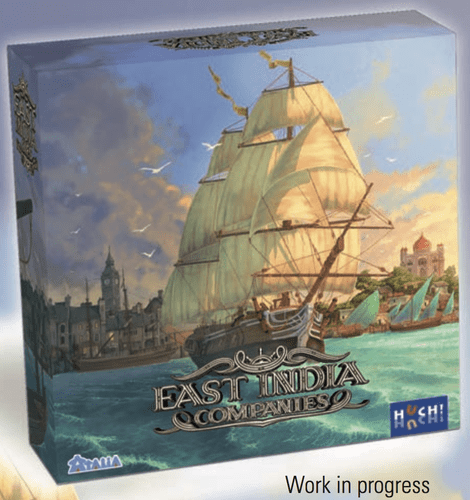 In East India Companies, players manage a large shipping company that trades with far flung trading posts in India. They must manage their ships and invest in buying shares of their own company or those of their competitors. Most importantly, players have to keep an eye on the constantly fluctuating market prices! Is it better to invest your money in the stock market or in buying goods? Do they prefer to use fast ships with low tonnage or slower ships with larger holds? Whatever the players choose, their strategies will influence those of their opponents.

• Another Atalia game that's been picked up by HUCH! is Cesare Mainardi's Conquêtes ("Conquests") from November 2021, which will bear the name Erobern! in the new edition.

This 2-4 player game is essentially Risk transformed into a quick-playing card game:
Quote:
Conquêtes is a game of world domination and empire building. As generals leading powerful armies, you try to conquer the largest territory — but you must be prepared to fight because your opponents have the same goal.

Each player starts with five cards in hand, and on a turn you take one of three actions:

—Draw two cards.
—Place a region card from your hand into play face up as long as no one else has already claimed this region.
—Attack a region owned by an opponent. Each of you can choose cards from your hand as reinforcements, revealing them at the same time and adding their value to the die on your attacking or defending card. If the attacker has a higher value, they take the card and add it to their holdings; otherwise the defender keeps it. 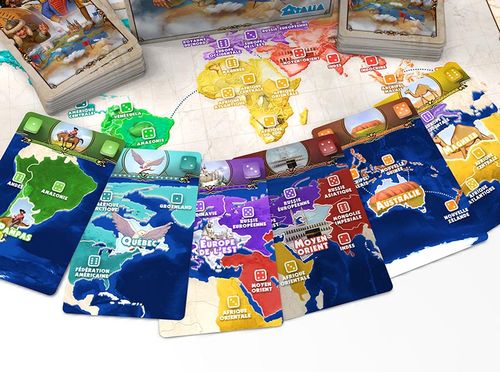 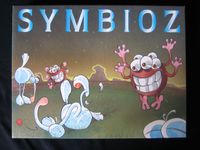 • An early 2022 HUCH! release for the German market actually originates from French publisher Nostromo Editions, which was founded by designer François Bachelart to release his own works, including a redevelopment of his 1995 co-design Symbioz under the name Symbioz Evolution.

For now, though, Nostromo Editions will launch with the 1-4 player game Aetherya at the FIJ game fair in Cannes at the end of February 2022, with HUCH! releasing the game in German in the first half of 2022. Here's an overview of the design:
Quote:
In Aetherya, unexplored wilderness and a constantly changing kingdom await you. Humans, elves, dwarves, goblins and dragons live here, but don't always get along. Will you make history, or will your kingdom perish in conflict? It is up to you to shape the land according to your ideas and to accommodate all the inhabitants of Aetherya peacefully. But make sure that your neighboring kingdoms don't develop faster than you... 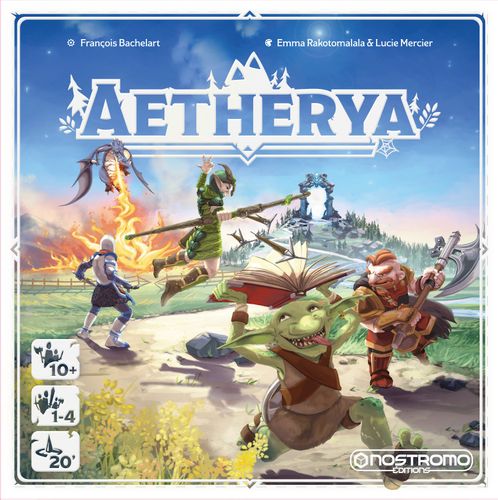 In the game, each player starts with a 4x4 face-down arrangement of cards, and each turn you draw a card to replace something in your playing space.

Aetherya includes three game modes — competitive, co-operative, and solo — as well as variants for players of different ability levels.
That description is fairly vague, so here's a graphic from HUCH! that employs the trademarked 1-2-3 approach to pitching games: