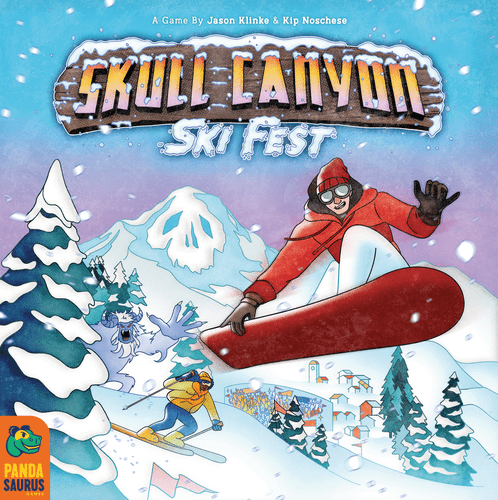 If you want to be reckless on the slopes no matter the weather, U.S. publisher Pandasaurus Games plans to satisfy those desires in 2022.

Here's an overview of this 2-4 player game that carries a 45-60 minute playing time:
Quote:
Prove you're the ultimate skier by taking on the most difficult runs, collecting the best gear, and earning the highest score!

To get your ski on in Skull Canyon: Ski Fest, you need to collect and turn in matching sets of slope cards. Each set you turn in lets you ski a run on the mountain, earning victory points, fame, and a spot on the run scoreboard that tracks who performed best on each run. The higher a run's difficulty rating, the more cards you need to collect to complete it — but you'll also score more points and earn more fame. 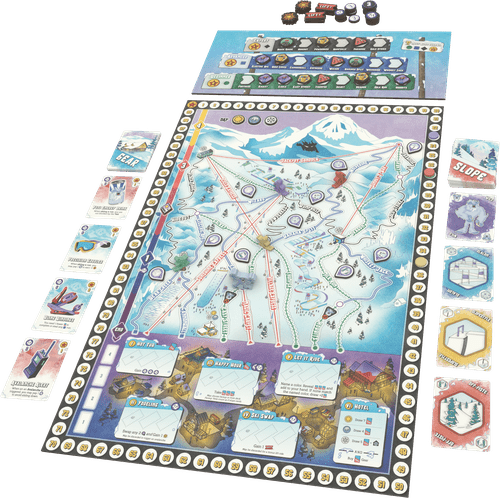 At the end of each day of skiing, you take a break at the Ski Village, where you can take bonus actions and acquire gear to prepare for the next day of skiing. At the end of the third day, players score for the number of easy, advanced, and expert runs they control, then whoever has the most victory points wins!
• This game will be followed in mid-2022 by Skate Summer from another first-time designer, Randy Reiman, with art by Pape Ink, who is new to working on games. 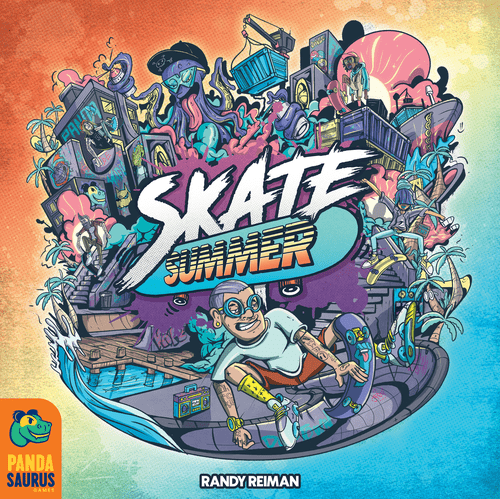 Note, though, that Skate Summer will precede Skull Canyon: Ski Fest in that the former game will be launched for funding on Kickstarter on January 18, 2022, with this 2-5 player game being released in two editions: a retail edition with limited stretch goals that will hit retail stores and special edition juiced with all stretch goals that will be available only through the crowdfunding campaign. As for what the game's about:
Quote:
It's summer, and you're riding the sun-drenched half-pipes of Pelican Park. Locals know there's no ledge too high, no rail too long, and no ramp too dangerous for you and your crew. Nail rad trick combos and show off your skills, but be careful — the longer you stay on your board, the more likely you are to bail!

The object of Skate Summer is to score the most points by doing trick combos, collecting goal tokens, and visiting S-K-A-T-E-R locations. The game is played in rounds. Each round has the following phases:

1. COMBOS: Players simultaneously play trick cards, earn rewards, and roll dice to check their balance.
2. SKILLS & POINTS: Players simultaneously improve their skills and score points for combos.
3. MOVES: Players take turns navigating the park, picking up goals and gear.
4. ROUND END: Each player resets their board and draws up to their hand size, then the "Pro Skater" first player marker passes to the left. 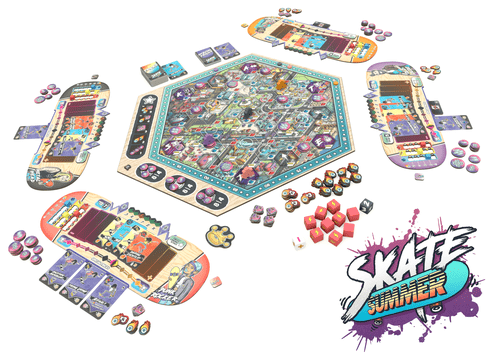 If any player's score has hit or passed the endgame token at the end of the round, the game ends and players count up their endgame points. The player with the highest score wins!
Okay, graphic designer Matt Paquette should feel stoked over those player boards, which are simultaneously obvious and ingenious...